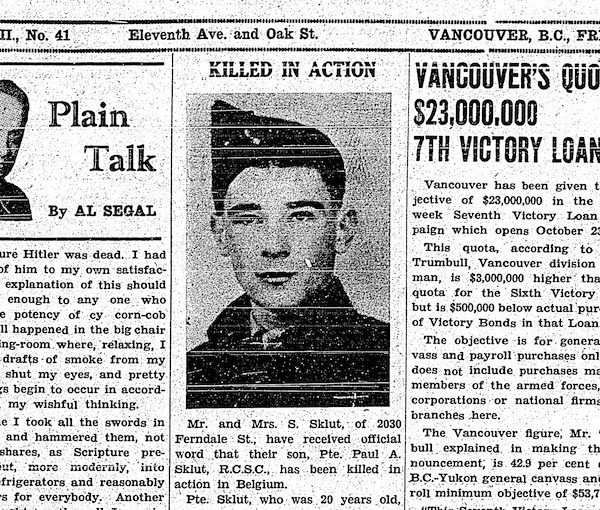 In looking through the Jewish Independent’s archives, after reading this article, this photo of Pte. Paul Sklut was found.

A Belgian tour guide and historian, Niko Van Kerckhoven, wrote to me recently. Van Kerckhoven, 50, and his teenaged son, regularly visit the graves of the Canadian soldiers who were killed liberating his town, called Wommelgem, during the Battle of the Scheldt, which was the Canadian campaign in the area surrounding the crucial port of Antwerp in fall 1944. It cost more than 6,000 Canadian casualties to take it, including that of Jewish volunteer Pte. Paul Sklut.

Van Kerckhoven has found photos of nearly all of the Canadian “boys” whose graves he visits, but not Sklut’s. As he wrote to me, “I’m quite desperate. You are pretty much my last chance for a picture!”

Sklut was the son of Russian-Jewish parents, and the family lived on Ferndale Avenue in Vancouver. It was a short walk to Britannia High School, where he was in the cadet corps, before he graduated.

Sklut’s name was often mentioned in the Vancouver newspapers, for he played competitive tennis, and also gave piano recitals at a venue on Granville Street.

Sklut was studying at the University of British Columbia when he was called up. He had just turned 19 on April 15, 1943. His two brothers, Harry and Donald, were already in uniform, with the army and the Royal Canadian Air Force, respectively. Sklut qualified as an infantry signaller in Kingston, Ont., then shipped out for England in July 1944. He was sent to France on Sept. 11, 1944, attached to the Calgary Highlanders. He was sent into action on Sept. 26. Twelve days later, he was dead.

“Many of them were just arriving here in Europe when they were thrown in this terrible battle of the Scheldt. I know the area well,” Van Kerckhoven wrote. “Many of the replacements died due to lack of training and experience. They really were used to plug the gaps in the infantry, although they were specialists by trade.”

Sklut was wounded on Oct. 8, 1944, and brought to a Canadian medical station that the Royal Canadian Army Medical Corps had set up inside one of the 19th-century forts near Antwerp, known as Fort 2, in Wommelgem. Military records confirm this happened.

Canadian medical personnel with the 18th Canadian Field Ambulance received Sklut at 13:00 hours. He was in really bad shape: he’d already lost his right leg at the knee, and his left leg and knee were fractured. He also had shell wounds in his chest and abdomen.

Locals buried Sklut with other foreign soldiers, about 40 of them, mostly Canadians, in the civilian area of the Candoncklaer Hospital Cemetery in Wommelgen. Later, their bodies were reinterred at the Commonwealth War Graves cemetery in Bergen-op-Zoom, across the border in Holland.

That’s where my Belgian correspondent visits Skult’s grave. Van Kerckhoven is a member of his local historical society in Wommelgen, known as De Kaeck. He would like to find the Sklut family to tell them their relative has not been forgotten; he is also looking for a photo of Sklut.

Contact me through my website, ellinbessner.com, if you are able to help this man as he continues to carry out a mitzvah, although I am not sure he is aware of what that word means. (I will explain it.)

Ellin Bessner is a Canadian journalist based in Toronto. She is the author of a new book about Canada’s Jewish servicemen and women who fought in the Second World War, called Double Threat: Canadian Jews, the Military and World War II, which was published by University of Toronto Press (2019). She also contributed a chapter to Northern Lights, published by the Lola Stein Institute (2020); it is the story of the contribution of Canada’s Jewish community to the country’s military record from 1750 to today.