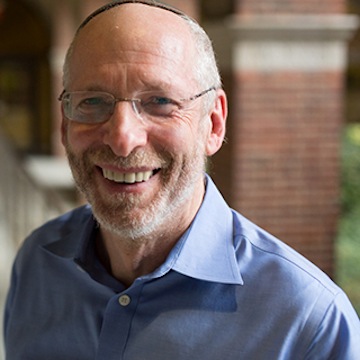 “I am particularly interested in the way that Torah can help us look inward. Each of the topics is about religious character formation, various ways in which we create a more godly character and personality,” said Rabbi Eliezer Diamond in a Zoom conversation with the Jewish Independent ahead of his visit to Vancouver next month.

Congregation Beth Israel will be hosting Diamond as its scholar-in-residence for three in-person talks under the collective title Making a Life of Meaning. A professor of Talmud and rabbinics at the Jewish Theological Seminary of America, in New York, Diamond will speak on Addiction and Judaism (April 28, 7:30 p.m.), the Power of Gratitude (April 29, 6 p.m., with a dinner to follow) and Seeking and Granting Forgiveness (April 30, 9:30 a.m.).

In regard to addiction, the rabbi compares the 12-step process of Alcoholics Anonymous with the laws of repentance by Maimonides and notes the parallel paths taken towards sobriety and repentance: acknowledgement, regret and acceptance.

“Not drinking and being sober are not the same thing. To recover from alcoholism, one has to change one’s way of living and thinking,” said Diamond, who discusses addiction from both a personal and professional perspective.

“I am a recovering alcoholic and I know about addiction from the inside,” he said. “Even though I am not a therapist or addiction counselor, what I can do is help people to be honest with themselves and say ‘I have a problem,’ which is an acknowledgement of the sin and a step towards repentance. It is important to help people see where they are at so that they can begin to make changes.”

It is also helpful, he added, for his rabbinical students to know that their teacher is a recovering alcoholic because there is frequently a shame involved in addiction and a sense that one is a diminished person as a result.

“I am there to say to them, those may be the cards one has been dealt. You can still be a productive human being and, if you take the steps you need to take to deal with addiction, there is no reason for shame. On the contrary, there is a reason for pride. You have been faced with a challenge and you have addressed it,” he said.

Diamond pointed out that, in a broad sense, there has been an acknowledgement in the past couple of decades within the Jewish community that Jews, like everyone else, have problems with addiction.

“We are not immune to addiction, as people think or would like to think,” he said. “In my own lifetime, the community has become more open. The founding of Jewish Addiction Community Services [JACS] is an example of that.”

In addition to Congregation Beth Israel, Diamond’s talks in Vancouver are being sponsored by JACS Vancouver, Jewish Family Services Vancouver and Jewish Federation of Greater Vancouver.

Diamond’s discussion on gratitude is tied to the teachings of Rabbi Eliyahu Eliezer Dessler, an early 20th-century leader in the mussar (Jewish ethics or values) movement, who saw giving as being at the heart of the religious personality. In Dessler’s teachings, God, by providing life, is the ultimate giver. Therefore, to follow in God’s path, we must be givers ourselves. There are times, however, when we must also be receivers, and the best way to receive is through gratitude, Diamond explained.

Expanding on the theme of gratitude, Diamond added, “Ultimately, whether or not we experience ourselves as wealthy or poor is intimately connected to finding happiness and satisfaction with what we have. If we focus on what we have and the happiness that it can bring us, then we can feel wealthy. This is a choice that all of us, especially in a first-world situation, have.”

On forgiveness, the rabbi cited Christian theologian C.S. Lewis, who spoke of the human desire to seek forgiveness yet the difficulty humans have in granting it.

“Forgiving is a hard thing to do,” said Diamond. “What does it actually mean to forgive someone? Because, unless we lobotomize ourselves, we are not going to forget what happened. The essence of what I will be talking about is the relationship between forgiveness and recognizing the essential humanity of every human being, including those who have wronged us.”

What often stands in the way of forgiveness, he said, is the inability to view another person as anything other than evil, and not as a flawed individual who has stumbled, as we all stumble. The path towards forgiveness, according to Diamond, is to make that distinction.

Amid social and political divisiveness, which causes rifts in families and communities, Diamond further emphasized the importance of being able to listen to and appreciate the inherent humanity and sincerity in belief of those with whom we may strongly disagree.

“Rabbi Diamond is one of most well-respected scholars in the Conservative movement today,” said Beth Israel’s Rabbi Jonathan Infeld. “He is exceedingly bright, knowledgeable and eloquent. He is also passionate about the human value of gratitude and the importance of recovery. Considering the fact that drug and alcohol addictions and overdoses have been less spoken about during the pandemic, we knew that Rabbi Diamond should be our first in-person scholar-in-residence since the beginning of COVID-19. We are so happy that other community agencies are joining us. We look forward to welcoming Rabbi Diamond to Vancouver and learning from this incredible rabbi.”

To register for the April 29 dinner, visit bethisrael.ca.