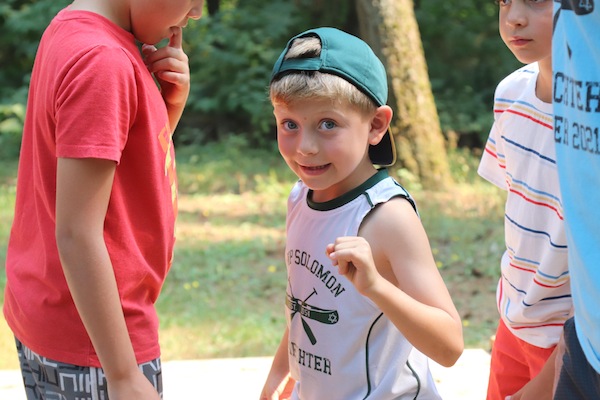 There’s a place where kids can simply be themselves. Where they build community, take on challenges, become independent and develop leadership skills. And, through it all, they think it’s just fun and friendships. That’s the magic of summer camp – a healthy dose of nature and nurture.

One year after sleepaway camps across the country were shuttered by the pandemic, many kids packed their shorts and hiking shoes once again, dug out their sleeping bags, and reunited with camp buddies to rekindle fond traditions.

We asked the directors of three Jewish summer camps in Washington state to share their perspective on the role camp plays in the social and emotional health of children, and how it was especially vital in the summer of 2021.

Welcome back to camp

“Welcoming the kids back this summer was extra special,” said Zach Duitch, director at Camp Solomon Schechter in Tumwater. “We could see it in their faces. After being online for a year-and-a-half, they were ready to be outside, with their friends, and having fun.”

Many parents were understandably concerned about sending their kids back to camp this past summer. Attendance numbers dipped somewhat, but families also recognized the value of getting their kids back to outdoor healthy summer fun, Duitch said. Away from everyday social pressures, camp staff works to create an environment that’s a safe place for kids to be their authentic selves.

“Parents trust us with their kids’ safety, security and health – and also with their spiritual and emotional needs. We take that trust incredibly seriously,” said Rabbi Ilana Mills, director at URJ Camp Kalsman in Arlington. “Camp is life-changing in so many ways. It’s an opportunity to grow as a whole person.”

When kids come home from one, two or three weeks at summer camp, the changes may not be immediately evident. In fact, many campers and counselors only realize as adults how much the experience has shaped them, instilling them early on with courage, compassion and independence. Kids can head off to camp as early as the summer after first grade. Many progress through the years to become counselors, taking on leadership roles as high school and college students, in what many describe as the “best job ever.”

Ask a kid and they’ll say camp is about boating, hiking, arts, sports, cookouts – and the thrill of a high-ropes course. Along with the fun, each camp has its own unique culture with familiar traditions passed down from summer to summer. Camp culture is what ties the community together with singing and celebrations, skits and games. Jewish summer camps also integrate religious observance and community into daily life.

“Camps are these bubbles – their own societies – where kids play a central role,” said Rabbi Kenny Pollack, camp director at Sephardic Adventure Camp in Cle Elum. “Our kids are immersed in the culture of camp, and it helps shape their identity.”

When camp directors describe how their programs nurture kids, it can sound pretty serious. But one thing they take extremely seriously is fun.

“At Camp Solomon Schechter we do a lot of ‘shtick.’ Campers love seeing their counselors act silly,” said Duitch, as he explained a beloved trivia game that ends with participants messy and everybody laughing.

Mills described how “we really try to be as outside the box as possible. We push our counselors to teach their passion, be creative and try new things.”

She even got a chance to join the fun, playing a zombie during the culmination of their outdoor survival unit at URJ Camp Kalsman.

Kids leave their parents and their digital devices at home when they arrive at camp. There may be homesickness at first but soon their days are consumed by activities and friendships. And, since more and more camps are going device-free, campers get a break from their screens.

“Camp is a place where kids get to be their authentic selves,” said Pollack.

Each summer, as kids are reconnecting with old friends and making new ones, they’re also connecting across borders. Increasingly, camps are bringing counselors from international locations to supplement the programming with games and traditions from their home countries.

“As much as kids love their parents, camp is a great opportunity for them to learn from other role models,” said Duitch, explaining how the camp experience broadens kids’ viewpoints and connects them to lifelong friends.

Many parents, kids and camp staffers found it heartbreaking to cancel camp in 2020. That’s why camps throughout Washington banded together, lobbying the state government to make sure that camp happened in 2021 and that it would be a safe and extra-memorable summer. In the end, it may be difficult to measure the social and emotional impact of returning to camp after a trying year. But parents could no doubt see it in the hugs, the joy and the happy exhaustion as they picked their kids up at the end of camp this past year.

This article, courtesy Camp Solomon Schechter, comes from the Samis Foundation, which was established in 1994 by Samuel Israel, z”l, and is the largest Jewish philanthropy in Washington state. Grantmaking is focused on the foundation’s mission of supporting local Jewish education and initiatives in Israel. Samis is honoured to support the three Jewish overnight camps located in Washington state, working to keep Jewish children and teens engaged in their culture, religion and communities.