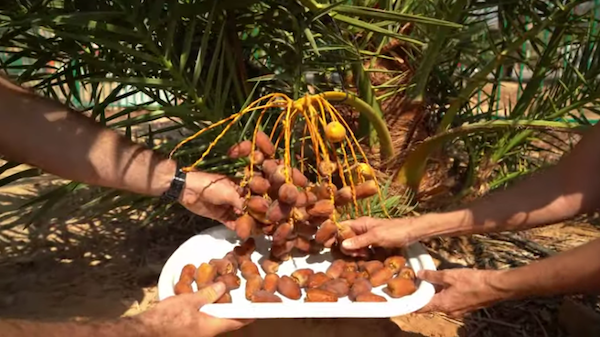 Dates being harvested from Hannah, a tree germinated from ancient seeds in Israel. (screenshot from arava.org)

The Mediterranean Diet is not a recent lifestyle development, but rather a form of eating going back to ancient times.

Based on the foods consumed by people living near the Mediterranean Sea, this diet contains lots of olive oil, legumes, unrefined cereals, fruits and vegetables. It includes fish and dairy products, such as cheese and yogurts. It allows for wine drinking and a bit of meat.

From the specialized field of Israeli agro-archeology, we can get an idea of what people once grew and ate – and a number of these foods are mentioned in the Torah.

In some instances, the sages understood why certain foods were healthy, as seen in this quote from Tractate Ketubot of the Babylonian Talmud: “Dates are wholesome in the morning and in the evening. They are bad in the afternoon, but, at noon, there is nothing to match them. Besides, they do away with three things: evil thoughts, sickness of the bowels and hemorrhoids.”

In September 2020, the Arava Institute harvested 111 very special dates – the first fruit of Hannah, a tree sprouted from a 2,000-year-old seed and pollinated by another ancient Judean date tree. Dr. Elaine Solowey, director of the Centre for Sustainable Agriculture of the Arava Institute, and Dr. Sarah Sallon, director of the Louis L. Borick Natural Medicine Research Centre of Hadassah Hospital, harvested these ancient dates in the culmination of a decades-long experiment to raise the biblical-era Phoenix dactylifera (date palm) from the dead. The date seeds were originally discovered in the 1960s, when Yigal Yadin excavated Masada.

And, in January 2021, Israeli archeologists published the discovery of thousands of olive pits off the southern coast of Haifa. These pits were embedded in stone and clay neolithic structures in a now-submerged area, but one that was probably once part of the northern coast. They date back to about 4600 BCE.

Tel Aviv University archeologist Dafna Langot points out that these pits were not from olives used for oil because, in the production of olive oil, the pits get crushed and, in this find, the pits were mostly still intact. The site’s proximity to the Mediterranean Sea may indicate that the seawater served to de-bitter, pickle and salt the olives. (To read the article “Early production of table olives at a mid-7th millennium BP submerged site off the Carmel coast [Israel],” visit nature.com/articles/s41598-020-80772-6. BP stands for “before the present.”)

There is no biblical reference to olive eating itself. But, at the ceremony in which Moshe’s brother Aaron and Aaron’s sons become the priests over the ancient Hebrews, they ate matzah with oil olive (Exodus 29:2). Indeed, olive oil seems to have the edge over olives as seen in R. Yohanan’s warning: olives cause one to forget 70 years of study, olive oil restores 70 years of study (Babylonian Talmud, Horayot 13b). Yet, in Numbers Rabbah 8:10, proselytes are praised using a comparison to olives: “just as there are olives for eating, preserving and for oil … so from proselytes came Bible scholars, Mishnah scholars, men of commerce and men of wisdom, men of understanding.”

Around the ancient Hula Lake – referred to by researchers as Gesher Benot Yaakov or GBY – Israeli archeologists have discovered different types of nuts, dating back to the Lower Paleolithic period (1.5 million to 200,000 years ago). Two types of pistachio nuts (Pistacia atlantica and Pistacia vera) are said to have been gathered there. (See “Nuts, nut cracking, and pitted stones at Gesher Benot Ya’aqov, Israel,” at pnas.org/content/99/4/2455.)

Pistachios are one of only two nuts mentioned in the Bible. Pistachios may have grown in the Garden of Eden (Genesis 43:11). Legend has it that the Queen of Sheba declared pistachios were to be enjoyed only by royalty, even decreeing that it was illegal for commoners to grow pistachio trees. The nuts were considered an aphrodisiac.

In the Middle East, both Muslims and Jews prepare pistachio-filled baklava for holiday celebrations.

On the Gezer Calendar, which dates back to King Solomon’s era, the springtime months of Iyar and Sivan are noted as the time for harvesting barley, the first grain to ripen in Israel. On the status scale, however, barley was held in low regard. It was used as fodder for donkeys and horses (I Kings 5:8). Thus, in biblical times, if you ate barley, it was a sign you were poor. At recent Israeli archeology digs, onsite workers collected barley seeds from the epipaleolithic period, some 20,000 to 10,000 years BP.

In addition, Israeli archeologists have identified 1,000-year-old eggplant seeds. They found the seeds in cisterns located in an ancient market complex that was discovered in Jerusalem’s Givati Parking Lot dig, more or less across from the Old City’s Dung Gate. The cisterns apparently had been left behind in either cesspits or garbage pits and the eggplant seeds had neither rotted nor disintegrated. Researchers surmise that the market stall owners used garbage pits to hold their unused stock or to discard damaged produce. Eggplant seeds found in cesspits were seeds consumed and naturally eliminated.

Eggplants are well-traveled. According to the late Gil Marks, in his cookbook Olive Trees and Honey: A Treasury of Vegetarian Recipes from Jewish Communities Around the World, eggplants originated in India some 4,000 years ago. By the fourth century CE, eggplants arrived in Persia. From, there they were “picked up” by Arabs, who probably brought them to Spain in the ninth century. Claudia Roden writes in her book The Book of Jewish Food: An Odyssey from Samarkand to New York that Jews came to be associated with eggplant when they fled the Almohades and Almoravides and when the Inquisition banished them from southern Italy.

Seeing that pomegranates are part of the Rosh Hashanah table, I’ll close with some information about the ancient fruit, one of the seven species mentioned in Deuteronomy 8:8. The Roman Pliny the Elder, who died in the 79 CE eruption of Mount Vesuvius, also had something to say about this juicy fall fruit – he wrote that the wild pomegranate seed, taken in drink, is curative of dropsy (edema).

Pomegranate seed oil contains high concentrations of Omega 5, which is believed to be one of the most powerful antioxidants in nature. Prof. Ruth Gabizon and Prof. Shlomo Magdassi from Hebrew University and Hadassah Hospital are hopeful that their pomegranate seed oil research will lead to a way of slowing down or lessening the effects of degenerative brain diseases.

A 2020 report by other researchers, which was published in The American Journal of Clinical Nutrition (doi.org/10.1093/ajcn/nqz241), contends that pomegranate juice helps maintain visual memory skills in middle-aged and older adults. The authors of the study state that it could have a potential impact on visual memory issues commonly associated with aging.