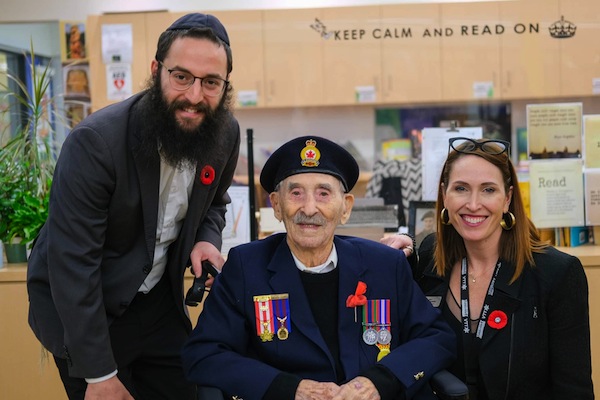 In front of hundreds of students, staff and guests at Vancouver Talmud Torah elementary Nov. 11, Canada’s oldest veteran of the Second World took an honoured place and laid a wreath at the school’s annual Remembrance Day ceremony Nov. 10.

At the age of 111, Reuben (Rube) Sinclair is not only the oldest war veteran but certainly one of the oldest people in Canada. Soft-spoken and hard of hearing, Sinclair nevertheless quipped with family and reporters before the ceremony and beamed with pride at times throughout the midday event.

Sinclair was born in 1911, on the family farm near Lipton, Sask., a Jewish farm colony underwritten by Baron Maurice de Hirsch’s Jewish Colonization Association. Sinclair’s parents, Yitzok and Fraida, received property from the association but the farmland was poor so they saved up money Yitzok earned working for the Canadian National Railway to purchase better land nearby.

It was a vast undertaking – more than 2,500 acres, with milking cows and 42 horses. Among young Rube’s tasks was collecting the eggs from the chickens. He was driving vehicles at the age of 12.

Yitzok Sinclair (né Sandler) had migrated from Ukraine and was a leader in the small Saskatchewan Jewish community. He donated land and helped construct a school, which doubled as a synagogue.

Rube Sinclair was no longer a kid when he signed up for the war effort. At the age of 31, in 1941, he joined the Royal Canadian Air Force, where he became a corporal pilot and taught other pilots to take off and land in the dark using a “standard beam approach” that, in the days when radar was rare, involved a navigation receiver that lined the aircraft up with the runway.

The forces redeployed him to the West Coast and, after the war, with his youngest brother Joe, the siblings opened Sinclair Bros. Garage and Auto Wrecking in Richmond, just across the two long-disappeared Fraser Street bridges from Vancouver. Rube trolled in a tow truck, collecting old cars to salvage and the brothers refurbished and sold surplus military vehicles.

For three decades, from 1964, Sinclair and his wife, Ida, lived in southern California, where Rube worked in a family furniture business. Their philanthropy included raising more than a million dollars for a cancer hospital and research facility.

They returned to Vancouver, and Ida passed away in 1996. Rube is a great-great-grandfather and, among other recognitions, is a lifetime member of Congregation Schara Tzedeck.

At the VTT commemoration, Sinclair waved and grinned at students as his daughter, Nadine Lipetz, pushed him in a wheelchair, escorted by a bagpiper, to the place of honour at the ceremony in the school gymnasium.

Also present were representatives of the lieutenant governor of British Columbia, the Canadian Armed Forces, the Vancouver Police, the United States Secret Service and the Royal Canadian Legion Shalom Branch #178. All these guests laid wreaths, as did representatives of the Jewish Federation of Greater Vancouver, the Centre for Israel and Jewish Affairs, the VTT board of directors and VTT staff.

“Today, our community gathers to remember, pay our respects and appreciate the freedoms we have been granted by the sacrifices of others,” said Emily Greenberg, VTT head of school. She urged students to recommit themselves to being students of history and humanity “so that you can steward and inspire peace and compassion.”

In a d’var Torah, Rabbi Levi Varnai, the VTT school rabbi, held up the veterans as a model.

“What we can learn from their courage and their bravery is that we too should and could be brave and courageous, to always stand up for what’s right,” said Varnai. “Whenever we see something happening in the world, remember you have a voice and you can stand up and you can say always what’s right. That would be a legacy to their memories.”

Students sang and a video was screened of VTT students holding photographs of ancestors who had served in the military.