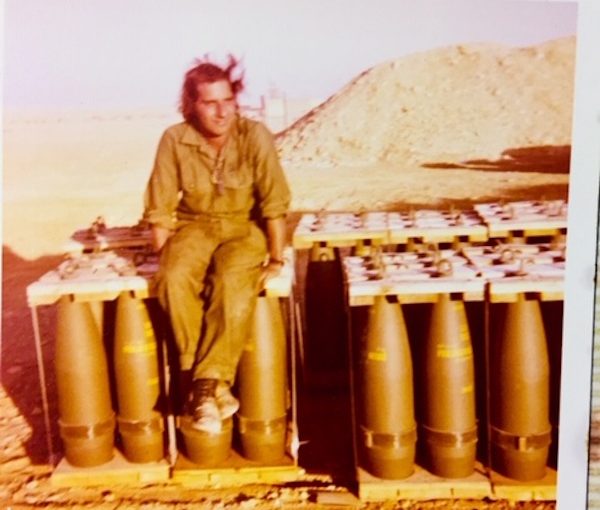 The author in the Sinai in October 1973, before his unit was attacked by two Iraqi planes, which caused the unit’s ammunition supply to explode, killing some soldiers and wounding others. (photo from Yom Shamash)

I would like to say that an event that happened 46 years ago left no marks on me and that I am over it. But then, I would not be honest. In fact, the experience left an indelible mark on my life and changed me completely.

In 1971, I returned to Israel – the country of my birth and early childhood – from Brazil with a Zionist youth group, to Kibbutz Zikim. I remember very well the prevailing thinking in Israel then. Four years after the victory of 1967, Israelis were quite confident. Egypt, the most powerful enemy Israel had, was neutralized. We were strong. We had conquered the Sinai, Gaza, the West Bank and the Golan. All in six days. I had absorbed this attitude and felt secure in my little world.

I served in the Sinai before the war; I was in a Nahal Brigade unit in which part of my service was spent on a kibbutz. On Oct. 6, 1973, I was on the kibbutz. It was Shabbat, Yom Kippur. Because Israel was caught off guard, there was no time to set up the unit in an orderly manner. As soon as we arrived at our position behind a high dune in the Sinai desert, we started shooting. My tank had a long-range cannon; we could not see what we were hitting 30 kilometres away.

Because my job was to pull the cannon’s trigger with both hands, I could not block my ears with my fingers, as all my tank mates did. As a result, I have a significant and permanent hearing loss.

On Oct. 13, 1973, our unit was decimated by two Iraqi planes. There had been a lull in the fighting and we had been resting on the sand. Suddenly, the two planes swooped from the sky, dropped bombs and disappeared in a matter of seconds. Very quickly, our own ammunition started to explode. Pieces of shrapnel started flying. The only thing to do was to run away from this inferno. Some soldiers were wounded, some died, and all who survived were traumatized.

Looking back now from the vantage point of 2019, many of us wonder about the heavy loss of young lives. Israel lost about 2,700 soldiers in that war. What did they die for? Defending the Sinai? Those of us who served in the Sinai know well that there isn’t much there except sand, stretching for miles; there isn’t much there to defend. What I didn’t know in 1973 was that, for several months prior to the war, Israel’s then-prime minister Golda Meir had rejected numerous initiatives by Egypt’s then-president Anwar Sadat to negotiate a peace accord. Was it worth it holding on to the Sinai? Especially since, in the end, Israel wound up returning the Sinai anyway?

The same could be said about Lebanon – more than 1,200 Israelis lost their lives in Lebanon from 1982 to 2000. Was it worth it? We must ask this question of the parents of those soldiers who lost their lives. I wonder what they would say.

I am afraid that one day the West Bank and the Golan will return to their rightful owners, the Palestinians and the Syrians, and, years later, we will ask ourselves what the hell we were doing in these places, and in Gaza.

Two million Palestinians in Gaza and two-and-a-half million in the West Bank, who do not have the right to vote in Israel, will not disappear, and I see no reason why Israeli soldiers should be controlling the movements of Palestinians traveling within the West Bank and those wanting to leave or enter the Gaza Strip. If I told you that Israelis traveling from Tel Aviv to Haifa have to pass through Palestinian checkpoints, you would say this is absurd. And I would agree, but it is no less absurd than Palestinians going from Ramallah to Nablus having to pass through Israeli checkpoints.

And why are settlers in the West Bank consuming 10 times more water than the indigenous Palestinians? And why are Israeli soldiers protecting settlers – who should not be there in the first place – some of whom do not serve nor send their children to serve in the army?

There can be no peace in Israel until there is peace in Gaza and the West Bank. The occupation is a recipe for continuous wars and insecurity for all.

I recall clearly, at the end of the Yom Kippur War, returning my equipment at the army base. I pledged that I would never again wear a green uniform.

For a long time, I did not understand how and what changed inside me that October. No one talked about post-traumatic stress disorder; no one talked about personal feelings. But the recurring nightmares never stopped. The fear and anxiety stayed. Right after the war, I sought out a psychiatrist friend, who told me to leave Israel for awhile – I had planned to study in Jerusalem, but he said leave and decide later. I left. I came to Canada, started a new life, married, studied, had four kids, remarried, had a good career and am enjoying life with my wife, children and four grandchildren.

What happened on Oct. 13, 1973, changed me and shaped my views, my values, my activism, my appreciation for what is important in life. Perhaps one of the most important lessons I learned is that war is never the best option to resolve conflicts. Taking land from others is never a way toward peace. Military strength is not a guarantee of security.

I wish I could be optimistic about the future of Israel, but I am not. For me to have any optimism at all, at a minimum, the occupation would have to end.

Yom Shamash was born in Israel. At the age of 6, his family moved to Brazil. He returned to Israel as a member of the Hashomer Hatzair group and settled in Kibbutz Zikim, south of Ashkelon. In British Columbia, he worked as a public school teacher in Surrey and, since retirement, he has been working as a translator and babysitter.