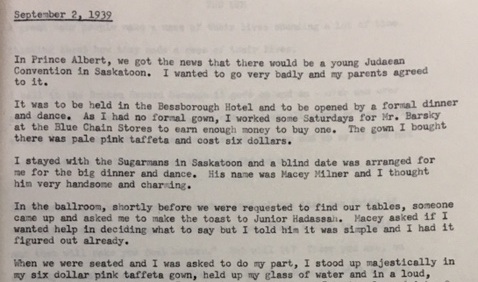 This diary note from Molly Dexall, recalling events from Sept. 2, 1939, was found by her son, Fred Dexall, and Alex Krasniak, community support worker at Yaffa House, in one of Dexall’s old binders. It was written by his mother, who was 19 at the time; she died in 1977. It is reprinted here with permission, marking 80 years since the outbreak of the Second World War on Sept. 1, 1939.

In Prince Albert, we got the news that there would be a young Judaean Convention in Saskatoon. I wanted to go very badly and my parents agreed to it.

It was to be held in the Bessborough Hotel and to be opened by a formal dinner and dance. As I had no formal gown, I worked some Saturdays for Mr. Barsky at the Blue Chain Stores to earn enough money to buy one. The gown I bought there was pale pink taffeta and cost six dollars. 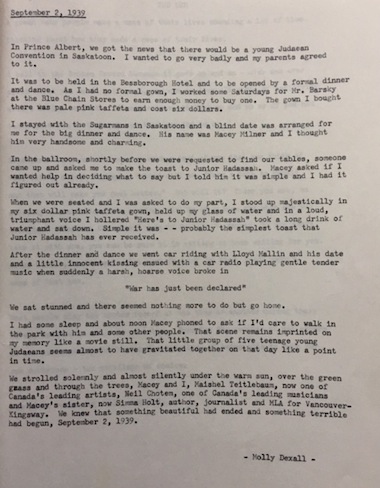 I stayed with the Sugarmans in Saskatoon and a blind date was arranged for me for the big dinner and dance. His name was Macey Milner and I thought him very handsome and charming.

In the ballroom, shortly before we were requested to find our tables, someone came up and asked me to make the toast to Junior Hadassah. Macey asked if I wanted help in deciding what to say but I told him it was simple and I had it figured out already.

When we were seated and I was asked to do my part, I stood up majestically in my six dollar pink taffeta gown, held up my glass of water and in a loud, triumphant voice I hollered “Here’s to Junior Hadassah” took a long drink of water and sat down. Simple it was – probably the simplest toast that Junior Hadassah has ever received.

After the dinner and dance we went car riding with Lloyd Mallin and his date and a little innocent kissing ensued with a car radio playing gentle tender music when suddenly a harsh, hoarse voice broke in

“War has just been declared”

We sat stunned and there seemed nothing more to do but go home.

I had some sleep and about noon Macey phoned to ask if I’d care to walk in the park with him and some other people. That scene remains imprinted on my memory like a movie still. That little group of five teenage young Judaeans seems almost to have gravitated together on that day like a point in time.

We strolled solemnly and almost silently under the warm sun, over the green grass and through the trees, Macey and I, Maishel Teitlebaum, now one of Canada’s leading artists, Neil Chotem, one of Canada’s leading musicians and Macey’s sister, now Simma Holt, author, journalist and MLA for Vancouver-Kingsway. We knew that something beautiful had ended and something terrible had begun, September 2, 1939.