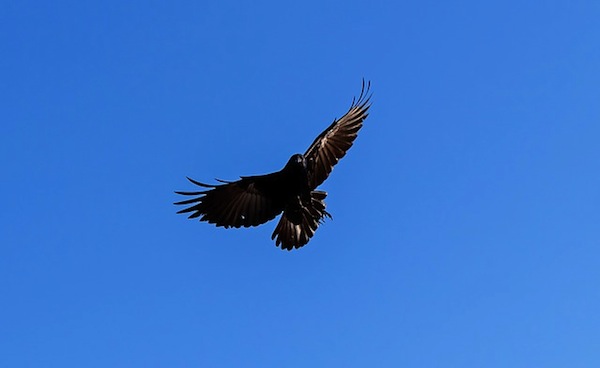 Raizel does not like to leave her apartment during the long, cold, season. She sits perched at the windowsill, torn bits of challah portioned beside her on the ledge, waiting for her feathered friends. A robin’s egg blue pashmina draped loosely across her thin shoulders.

On the Esplanade below, her neighbour Malka is carrying grocery bags on her way back from St-Viateur. It’s almost Shabbat and she is hurrying home to prepare the flanken, matzo ball soup and lokshen kugel. Raizel, on the other hand, makes cholent. She has everything she needs. Sometimes a bit more, sometimes a bit less.

Before Abe passed, Raizel would prepare a proper erev Shabbat meal; never went without kreplach or tzimmes. Now, she doesn’t even light the candles. There’s no one to say the brachah with, no one to make Kiddush. It’s all too quiet. She goes to bed early. When the children call, she’s taken the phone off the hook; doesn’t want them to know she’s alone in the dark.

In the morning, Raizel props open the bay window and rolls over the heavy oak desk chair. The one Abe sat in for 62 years preparing client accounts and tax returns; the threadbare cushion still warm. She picks up the binoculars, placing her elbows firmly on the ledge, and straightens her arthritic back. The air is fresh. A light snow is falling. The parade of black-capped chickadees, blue jays and purple finches remain hidden until she drizzles sesame seeds and the bread along the sill. But, today, she is looking elsewhere. They will have to wait.

Scanning the park, past the wrought iron fencing and its pointy spires, and past the rose garden buried under tufts of snow, she spots Malka. And Chaim, trailing close behind. A pleasure to see him. Raizel first began to notice Chaim only after her daughter bought her the binoculars, “to give her something to look at,” her daughter had said, “since she was refusing to go out.”

At first, Raizel thought she must be imagining things, thought maybe she should call Dr. Lipschitz to make an appointment. But, no, it was him. Chaim would swoop down close behind Malka, a few feet off the ground, his arms gently flapping, like a midnight black crow. He would accompany Malka as she walked along the stone pathway, always just as far as the gate leading onto Fairmont Avenue. And he would be dressed for the season: pastel peach plumage in summer and shimmering black feathers fringed with vanes of barbs in winter; how did he know?

Raizel and Abe had gone to the funeral, they went to the shivah, they consoled Malka and her children; there was no doubt, Chaim was gone. But now, here, there he was, fawning over Malka all over again, her constant companion. Raizel had been curious how it was that Malka couldn’t see Chaim, didn’t seem to even know he was there. No hidden smile, no look back, no small wave. Nothing. So, it was strange when Malka started spending so much time promenading around in the park, no matter the weather, or time of day.

Raizel felt a little chilled. She had been watching them for nearly an hour. She pushed the window closed and began to set the table for lunch. Cholent. It would warm her up.

Before sitting down to eat, Raizel picked up the binoculars again and scanned the apartment. Would she be so lucky? Would it be one or two for lunch today?

Karen Schauber is a family therapist practising in Vancouver. Her earlier writing is non-fiction and details three decades of psychosocial and analytical cases. Flash fiction is a new adventure for her, and her work has been published in literary magazines and anthologies, including Brilliant Flash Fiction, Bending Genres, CarpeArte, Ekphrastic Review, Flash Boulevard and Blood Puddles: An Anthology. The upcoming Group of Seven Flash Fiction anthology, celebrating the Canadian modernist landscape painters, is her first editorial flash venture. Schauber manages vancouverflashfiction.weebly.com and can be reached at karenschauber.weebly.com.