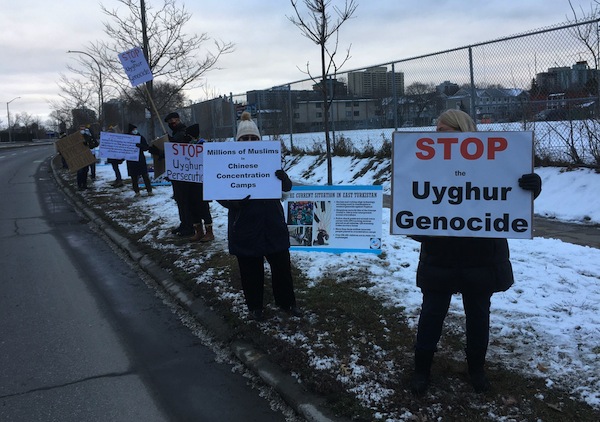 Since the High Holidays last year, a group of demonstrators has met every Thursday afternoon opposite the Chinese embassy in Ottawa to protest in support of the Uyghurs in Xinjiang. The protest was initiated by members of Kehillat Beth Israel, a synagogue in Ottawa, but has grown to include other faith communities and cities, including Vancouver. (photo from Phil Kretzmar)

The Chinese government is perpetrating a genocide against Uyghur people in the northwestern part of that country – with possibly millions incarcerated and untold numbers coerced into slave labour and forced sterilization. Reports also suggest organ harvesting. Children are being separated from their families.

Canada, the United States and the Netherlands have accused the Chinese government of committing genocide. There are about 12 million Uyghurs, mostly Muslim, living in the region of Xinjiang, which some Uyghurs prefer to call East Turkestan, reflecting their connection to central Asian cultures. A United Nations Human Rights Committee report in 2018 asserted that as many as one million Uyghurs were being held in at least 85 concentration camps, though other estimates say possibly three to five million are now incarcerated. The Chinese government acknowledges the existence of the camps, but claims they are education and skills training facilities.

Uyghurs who are not imprisoned have been subjected to intensive surveillance, repression of religious expression, slave labour and forced sterilizations.

A concerted campaign has been waged to suppress Uyghur culture and the Muslim religion to which most of them adhere. It began with a ban on men growing long beards or women wearing veils and expanded into the destruction of dozens of mosques.

The region is an economic powerhouse, producing 20 to 30% of the world’s entire cotton supply. It is also rich in oil and minerals, and produces China’s largest supply of natural gas.

A webinar was presented March 22 by the Canadian Multifaith Initiative for Uyghur Rights. In addition to three Uyghur expatriates who spoke from a personal perspective, three clergy members of different traditions spoke of the moral obligation to defend the imperiled people.

Vancouver anthropologist and author Alan Morinis was one of the organizers and moderators, and Rabbi Susie Tendler of Richmond’s Beth Tikvah Congregation introduced one of the speakers. Rev. Christopher Pappas, an Anglican priest, and Mufti Aasim Rashid, a Muslim scholar, also spoke.

Mihrigul Tursun, who spoke on the webinar, was incarcerated several times and said she was electrocuted and subjected to other forms of torture. She saw detainees beaten, starved and strip-searched. Scores of prisoners were kept in tiny spaces, forcing some to stand up while others slept sideways.

The Chinese government has contested Tursun’s testimony, claiming she was taken into custody on suspicion of inciting ethnic hatred and discrimination. The government also insisted she was not imprisoned, but spent time in a skills training facility.

Akeda Pulati described the personal anguish from a family’s perspective. Pulati’s mother, Rahile Dawut, disappeared on Dec. 12, 2017, and her family has had no contact and seen no trace of her since. She assumes her mother is in a “re-education camp.”

Pulati stayed silent for some time for fear of reprisals by the Chinese government against other members of her family and community.

“I stayed silent for too long,” she said. “One day, I realized I cannot stay silent anymore. Our people is experiencing a genocide. I don’t want my mother to die in this horrific place. I lost hope for the Chinese government to have mercy on my mother, have mercy on the Uyghur people.… I am not the only one experiencing this tragedy. There are many, many Uyghur children like me searching for their parents. We found each other on social media and we decided to do something together.”

Mehmet Tohti is a Uyghur-Canadian activist and executive director of the Uyghur Rights Advocacy Project, based in Ottawa. He is a cofounder of the World Uyghur Congress and has twice served as vice-president. By extrapolating the Chinese government’s own limited information on the subject, Tohti estimates there may be 7.8 million Uyghurs incarcerated.

The world must make China realize they will pay a price for their actions, Tohti said. “Unless there is a cost, the Chinese government won’t stop,” he said.

Canadian companies are the fifth largest investors in the region, Tohti said. “The Chinese ambassador [to Canada] said that Canada’s exports to China soared more than 95% in the last year,” he added. “We are still continuing business as usual.”

Canadians, Tohti said, should be calling on our elected officials to introduce legislation to ban imports of products that may have been created with forced labour. “We have to force our companies to disclose their supply chain,” he said.

Other Canadians are also stepping up on the matter. An ad hoc group coordinated by Ottawa Jewish community member Phil Kretzmar helped schedule a demonstration outside the Chinese consulate in Vancouver during Passover, on April 1. The local team intends to demonstrate outside the Chinese consulate in Vancouver, 3380 Granville St., every Thursday at 3 p.m. until further notice. For more information, email [email protected].