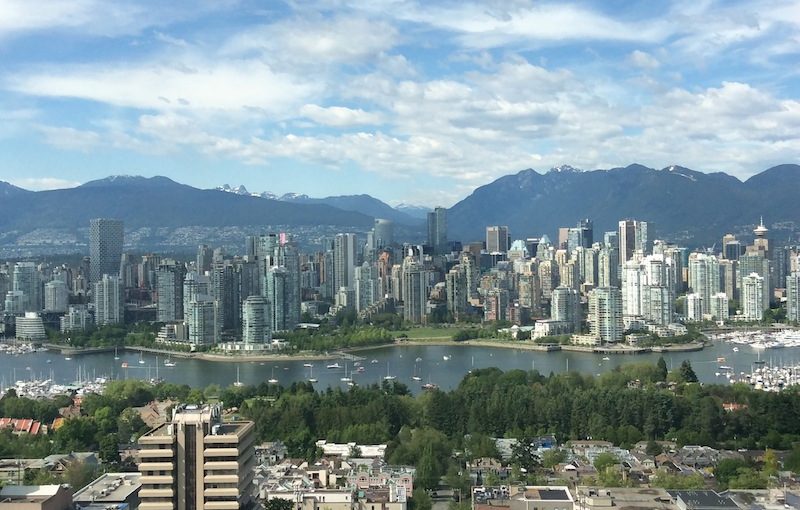 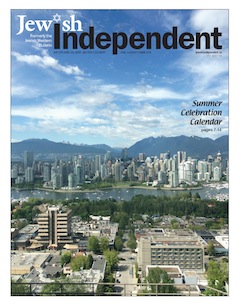 This year’s Summer Celebration cover photo was taken from the Vancouver General Hospital palliative care unit’s outdoor garden, on the 16th floor of the Jim Pattison Pavilion. It is dedicated to our dear friend and colleague Baila Lazarus who, at the age of 57, died at the hospital on May 31, due to complications of multiple myeloma. She was resilient to the end. May her memory be for a blessing.

The mission of the national competition, which took place in Toronto, is to “help raise funds and bring public awareness to [competitors’] charitable causes; promote multiculturalism, special events and nonprofit fundraisers throughout Canada. Be a symbol of today’s modern woman!”

Born and raised in Vancouver, Ohana, 23, works at All Hair & Skin Care, a beauty salon owned and operated by her family. She had never competed in a pageant before, but was inspired to get involved because of the various opportunities this particular event provides.

“The Miss Canada Globe Pageant is a beauty pageant that offers girls all over Canada a chance to get involved in their community and represent a charity of their choice to help fundraise for improvements,” she told the Independent in an interview before the competition. “I was modeling jewelry for a company and met another girl that previously participated in the same pageant. She said it was a life-changing experience that opened many doors for her community-wise and has, overall, made her a well-rounded person with more unique experiences.”

Excited by the prospects of meeting new people, making a difference and traveling, Ohana began the lengthy application process.

“I went through multiple interviews by application, phone and essay submission,” she said. “They accept people who want to make a change, are looking for something new and exciting, and can handle pressure.”

And the pressure was intense, as Ohana realized once she was accepted into the contest, for which she was sponsored by Pharmasave (Oak and 41st), After Five and the Jewish Community Centre of Greater Vancouver.

“To prepare, I have been working out everyday (thank you, JCC!), researching charities, fundraising to help cover costs of the pageant, and trying to find appropriate gowns, clothes and attire,” she said. “I have been educating myself on foreign events, I have been writing many essays on how I plan on helping my charity and community, and I’ve also been designing and making my national costume.”

Ohana admitted that she was surprised by the time, work and commitment required.

“It’s taken me months to prepare and it’s honestly unbelievable,” she said. “I thought this was going to be about great hair, dresses and a trip to Toronto! But, it turns out, it’s a whole lot of research about my community and becoming involved to make it a better place.”

Ohana’s road to the pageant had its obstacles. In April, mere months before the competition, she made the difficult decision to withdraw due to her father’s battle with mental illness.

“My father unfortunately slipped into a huge depression, causing me to put more important things first,” she explained.

It was the time spent at her father’s side while he was in hospital that opened her eyes to the needs of that facet of her Vancouver community.

“I met other patients and saw how lovely and warm they were, and saw how grim the hospital was, and I realized I could help raise awareness about the conditions and actually make a change with the help of the pageant,” said Ohana. “The patients inspired me to make changes for their sake.”

Ohana jumped back into the competition in June with the hope of making those changes.

“It has actually set me back quite a bit,” she admitted. “I’ve returned donations, let go of sponsors, and didn’t have time to properly fundraise, which has caused me to work way harder, but I believe everything will work out fine!”

In light of her experiences, Ohana used the pageant platform to get involved with the VGH & UBC Hospital Foundation, specifically the fundraising unit for mental health care. But her commitment extends beyond the event.

“Because of what my father went through, the conditions at the hospital really struck a chord with me and this is more of a personal goal, to make things better, rather than just for the sake of the pageant,” she said.

Nonetheless, her participation in the pageant was essential for her to make the impact she wanted.

“This pageant is helping me get involved with charities that have helped my family personally and is giving me more of a voice,” she said. “Before I joined, I felt I could only help so much, but now it’s given me the power to join the foundation and raise awareness.”

Ultimately, Ohana wishes to help instil a sense of hope and community in the hospital’s mental health patients and their families.

“I hope to organize a group of people affected by mental illness directly or indirectly to help patients, once discharged, become more involved in the community so they do not feel so lost,” explained Ohana before the pageant. “I want to provide support for the patients in terms of visitation and outings, as many of them do not have supportive families or visitors and are faced with loneliness, boredom and a tough environment both inside and outside the hospital.”

During her father’s illness, Ohana saw firsthand the valuable difference being part of a strong, supportive community makes.

“As my family has experienced, a sense of community is everything,” she said. “Without this wonderful Jewish community, things would have been a lot harder and we would not have been able to handle it.”

Ohana – who won Miss Petite British Columbia and then took the national title – is following through on her pageant goals. Inspired by the 80 contestants of the event, she said, “I created OHANA support circles right after the pageant to help people who have gone through rape, abuse, mental illness, homophobia, molestation, eating disorders and many other forms of trauma; for victims to share their stories with other victims who do not have a support system. I’m hoping I can strengthen communities and destroy the fear that has been put in people. It has been lovingly received and I have had many men and women approach me to join. My pageant sisters across Canada are also taking on my challenge and starting circles in their communities.”

The group is accessible via facebook.com/ohanasupportcircles.

Ohana is also collecting donations in the form of toys, art supplies and books in support of fundraising for mental health care, which can be dropped off at All Hair & Skin Care on Oak Street.

“This year,” said Ohana, “I promised myself to try everything new that comes my way – and my life has definitely changed since I have.”

Brittni Jacobson is a freelance writer living in Toronto.