The Vancouver Holocaust Education Centre extends a mazal tov to board director and longtime volunteer Robert (Robbie) Waisman, who received the degree of honourary doctor of laws from the University of Victoria on June 13.

Waisman was one of the “Boys of Buchenwald” before he was liberated from the concentration camp, eventually emigrating to a new life in Canada, where he built a successful career and now dedicates himself to Holocaust education. He is a community leader, a philanthropist, a founder and past president of the VHEC, and an extremely effective educator who promotes social justice and human rights for all by sharing his experience as a child survivor.

Audiences impacted by Waisman’s VHEC outreach activities include thousands of British Columbian students each year, as well as students and community groups throughout Canada and the United States. He has served as a mentor to survivors of the Rwandan genocide who were wanting to share their eyewitness accounts. Also notable, Waisman was inducted by the Truth and Reconciliation Commission as an Honourary Witness in 2011, and has spoken alongside First Nations leaders and survivors of residential schools about reconciliation and healing.

A retired high school teacher, Bellas taught English and theatre arts for 32 years in the Delta School District. She directed more than 100 popular plays and musicals at Delta Secondary School in Ladner. Many of her students have graduated to become successful actors, writers, directors and educators, and they keep in touch with their first teacher/director. She was president of the Association of B.C. Drama Educators, and was instrumental in procuring funding for and in the designing of Genesis Theatre, a fully professional theatre in Ladner.

Bellas was born and raised in Vancouver. She attended Sir Winston Churchill High School and Schara Tzedeck Synagogue Religious School. She developed her strong community commitment through youth activities in Young Judaea, Camp Hatikvah, Camp Biluim and working as a camp counselor. In university, she was involved in the Student Zionist Organization and held leadership roles in Hillel. She became a charter member and eventually president of Atid chapter of Hadassah-WIZO Vancouver; she also served as the Vancouver council vice-president.

Since her retirement in 2003, Bellas has used her many talents and skills to serve her community: three years as secretary of the Jewish Seniors Alliance, four years on the board of the Louis Brier Home and Hospital and president of the ladies’ executive of the Richmond Country Club. She also directed musical shows at Vancouver Talmud Torah, produced souvenir books, chaired and worked on dinner committees for Congregation Schara Tzedeck, Vancouver Talmud Torah, Israel Bonds and the JNF. In 2013, Bellas and her husband Joel, z’l, were awarded the Betzalel Award at Schara Tzedeck Synagogue. Most recently, she chaired a very successful fundraising gala for RAPS (Regional Animal Protection Society).

Bellas served as president of JNF Pacific Region from 2012 to 2015. She remains active to this day, continuing as a board member, chairing and co-chairing Negev Dinner committees and producing the souvenir books. Bellas is on the national board of JNF and states that she is very proud to be part of such a proactive organization for the benefit of the state of Israel.

Bellas attributes much of the success of her stellar volunteer career to the loving support and encouragement she received from her beloved husband Joel, z’l.

Hebrew University of Jerusalem is known for innovation. With nine Nobel Prize and Fields Medal winners among its alumni and being ranked 12th in the world for biotechnology patent filings, there is an abundance of creativity and ingenuity emanating from the university. It should come as no surprise then that the Canadian Friends of Hebrew University (CFHU) co-convened a fundraising event honouring cardiologist Dr. Saul Isserow on June 28. Hosted by CFHU and VGH & UBC Hospital Foundation in the Landmark Aviation Hangar at YVR, the casual-chic event – which sold out just weeks after it was announced – hosted a capacity crowd of 500-plus people.

The huge walls of the hangar were draped and a lighting and sound system had been installed along with a cabana that was a full-service bar. There were five food stations, including one serving South African specialties. One wall of the hangar was open to the runway and a private jet was on display to top off the evening’s decor.

Among other things, Isserow is director of the Vancouver General Hospital Centre for Cardiovascular Health, director of cardiology services at University of British Columbia Hospital and medical director of Sports Cardiology B.C.

“It’s not in my nature to be fêted in this way,” said Isserow in his address, stressing that the evening was intended to be a fun night to celebrate the achievements of the cardiac team with whom he works, as well as his heartfelt support and love for the state of Israel.

There were more than three million reasons for celebration by the end of the night – to be exact, $3,046,350 was raised to support two initiatives. The money will be divided between CFHU’s Inspired by Einstein student scholarship program and, locally, Isserow’s Sports Cardiology B.C. program at UBC Hospital. Barbara Grantham, chief executive officer of the VGH & UBC Hospital Foundation expressed her gratitude to Isserow for agreeing to be honoured at this event. She said Isserow is a humble man who works tirelessly for his patients and credits his team for his successes.

A short video tribute to Isserow and his journey from South Africa to Canada revealed that he and his wife, Lindsay, began their lives in Canada in Nipawin, Sask. His journey from rural Saskatchewan to the upper echelon of Vancouver’s cardiology community is a testament to his talent and perseverance.

In addition to Grantham and Isserow, CFHU national board chair Monette Malewski gave brief remarks, which were followed by a performance by the Emily Chambers band while dinner was served. The crowd was treated to a short African drumming performance prior to a brief address by Ambassador Ido Aharoni, who spoke about the strong connection between the principles of Hebrew University founding member Albert Einstein and Hebrew U’s function as a launch pad for creative innovation in all areas. After Isserow addressed the group, the evening was rounded off with a DJ and dancing. 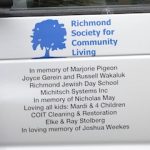 For the past few years, Richmond Jewish Day School’s Student Council committee has been collecting donations to support different charities throughout the Lower Mainland. As part of their ongoing fundraising, the school was able to donate $1,150 to the Variety Club Sunshine Coach program and the school’s name was recently inscribed on the side of a 15-passenger Sunshine Coach, which will be used by Richmond Society for Community Living. The vehicle will transport youth with diverse abilities to various programs throughout the city.

Last month, several Canadians – or former Canadians – attended the 50th anniversary of Hadassim Children and Youth Village in Israel. Reunion organizer Rabbi Shawn Zell and the other attendees were among the first young Diaspora Jews to spend a year in Israel on a sponsored program – in their case, one organized by Canadian Hadassah-WIZO.

Peter Barnett, fourth from the right, with the Variety telethon crew, in the 1970s/80s. (all photos from the Barnetts)

Variety – The Children’s Charity is holding its 50th Show of Hearts Telethon this year. The 23-hour event Feb. 13-14 will feature inspirational stories, live music and other entertainment. The funds raised will help Variety continue its support of B.C. children with special needs and the organizations that provide them care and services.

While the B.C. tent (or chapter) celebrates its 50th year, the international charity is almost 90 years old, having been started in 1927. There has always been strong representation by the Jewish community in Variety, including locally. As but examples, Howard Blank, who first volunteered when he was 13 years old, is the current B.C. president, and both Jeffrey and Peter Barnett are members of the local board of governors – they have been active in the organization for more than 45 years.

“Variety’s roots were in the entertainment industry, when it all began with a baby being left in a theatre in Pittsburgh,” explained the Barnett brothers. “There were many Jewish people in the entertainment industry, from managers, performers, theatre owners, filmmakers, distributors, in the early ’30s, ’40s and ’50s. As a result, the backbone of membership was Jewish.”

Peter was the first of the Barnett family involved with Variety, said Jeffrey. “Peter first heard of Variety when he was 15 years old in London, England, where he was an apprentice at the Savoy Hotel in the food and beverage industry,” Jeffrey explained. “At the hotel, the Variety Club would host fundraising luncheons, and he would peek around the curtains to see the entertainers attending, and got a knowledge of what the charity was about and who they helped, and said to himself that he wanted to be involved in the organization.

“He moved to Vancouver and saw a notice in the Vancouver Sun looking for new members and volunteers. So, he showed up. They said, do you have $35? He said yes, and became one of the early members of the newly established tent of the Variety Club of Western Canada. It started out with 15 men who gathered together to support special needs children.”

In its early days, explained the Barnetts, membership required that a certain amount of your income be related to the entertainment industry in some way, but the charity has since expanded. Anyone can become a member for an annual fee of $75, which gives you a vote at the annual general meeting, the chance to be elected to the board of directors and membership rates for events. Volunteers, of course, are always welcome, and there are partnership opportunities for businesses, as well as for people to hold their own fundraisers for Variety and to donate at telethon time.

Peter got Jeffrey involved with Variety, and Jeffrey became part of a small group that began to organize fundraising events, such as bed races on Granville Street, getting children involved with penny drives, luncheons and the annual telethon. Their father, Jack, was also a longtime volunteer, and all three men have served as chief barker/president of the Show of Hearts Telethon – Peter in 1973, Jack in 1976 and Jeffrey in 1980. Peter and Jeffrey’s mother, Edith, was a founding member of the Variety Ladies Auxiliary.

Both Peter and Jeffrey were encouraged by their parents – who served as role models in this regard – to help and contribute to the community. The brothers said their first involvement was with the Boy Scouts.

“It becomes a part of your life, relationships are developed, there is a camaraderie, and there is a lot of fun,” said Jeffrey. “It’s nice to do something selflessly to help other people. It makes me feel good.”

Among other endeavors, Jeffrey was involved in the B.C. Restaurant and Food Association, and is still involved with the annual Jewish Community Centre Sports Dinner. The Hebrew Free Loan Association has been one of Peter’s main concerns.

They both said they “enjoy the wonders of charity,” supporting, helping, contributing, and the fun they have in fundraising. Their biggest wish for Variety?

“To capture and engage young people to carry on the work that we have worked and nurtured over the many years,” said Jeffrey.

For Peter: “A wild dream – for medicine to catch up with the ills of today, that there would be no need for organizations like Variety.

Until that happens, however, there is a need, and people can help fulfil it in many ways, including by volunteering with, donating to and/or attending the Show of Hearts. Advance tickets for the telethon’s live performances at the Centre in Vancouver for Performing Arts on Saturday, Feb. 13, 7 p.m. (54-40, Aaron Pritchett, Five Alarm Funk and Vancouver Theatresports League, among others) and Sunday, Feb. 14, 2:30 p.m. (including Jim Byrnes, Chilliwack, Shari Ulrich and Colleen Rennison) are $50 and can be purchased via variety.bc.ca/ events/_entry/telethon. The entire telethon will be televised on Global BC.