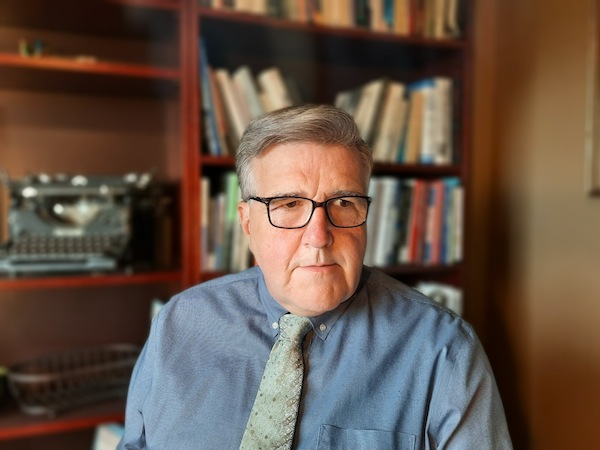 There has been a widening split between many progressive movements and the Jewish community in recent decades, according to Pat Johnson, the founder of Upstanders Canada. His Vancouver-based organization aims to encourage Canadians – especially non-Jewish Canadians – to stand against hatred of all kinds, but particularly against antisemitic words and deeds.

“You can make whatever justifications you want about what is wrong with Israel or criticize the government, but if a progressive movement finds itself at odds with 80% of Jewish people, then that is a sign that something is wrong with your worldview,” said Johnson, a member of the Jewish Independent’s editorial board.

“I have been watching as many people within the Jewish community became skeptical of the left – which their parents had built in this country. It is a betrayal.”

Long involved with progressive causes, such as gay rights, gender equality and interfaith dialogue, Johnson observed a rift forming amid the left and the Jewish community at the time of the Second Intifada that began in the Middle East in 2000.

“When Yasser Arafat turned to violence and the world, led by progressives, sided with the violence instead of demanding he return to the negotiating table, that is when the global left went off the rails,” he posited.

An ardent supporter of Israel, this was the genesis of his cognitive dissonance with the left. “I am a progressive Canadian and a fervent Zionist and there is nothing contradictory about that,” said Johnson, who is not Jewish. “What is contradictory is calling yourself a progressive and not supporting the Jewish people’s right to self-determination. I might not fit on the left any more but that is not because of me. It is because of them.”

The tipping point for Johnson happened in October 2018 on a return flight from Israel. On the airplane, he learned of the mass shooting at the Tree of Life synagogue in Pittsburgh. He realized then the need to launch Upstanders Canada.

“I thought somebody has to do something, I guess that someone could be me. We can’t pretend any more that this is not a serious problem in North America,” he said. “The Jewish community has always had to fight their battles themselves while progressives are standing up as allies to every socio-cultural group except Jews.”

An example Johnson uses to demonstrate this point is how many progressives have taken it upon themselves to disagree with the definition of antisemitism developed by the International Holocaust Remembrance Alliance. This, he asserts, they would not do with any other group. “When you treat the Jewish people differently than any other group in society – that is problematic,” he contended.

Antisemitism can be a “perfect prejudice,” he added, as Jews are deemed powerful by many, including those on the left. Thus, though most progressives may think antisemitism is not right and not view themselves as antisemitic, there is an element of “sticking it to the man and that the Jewish people will be just fine.”

“There is a theory that whatever happens to the Jewish people happened because they brought it on themselves and it is not something we say with any other group. Progressives will never say that any other victim of a hate crime brought that act upon themselves,” said Johnson.

A solution, Johnson believes, is for supporters of Israel to stop arguing with the people who will never agree with them. Instead, what should be done is to identify and mobilize the people who agree with Israel’s right to self-determination and don’t need convincing.

Upstanders Canada takes no position on issues that deserve to be resolved by Jewish people or the state of Israel, he said. Rather, it is based on the belief that Jewish people have a right to live safely and free from fear everywhere in the world.

The organization is currently building its database of allies. They welcome everyone, including those in the evangelical community and those communities in which antisemitism has surfaced, such as political parties on the left and trade unions.

In the past few months, Johnson’s letters have appeared in several newspapers across the country, reminding Canadians to be vigilant in the fight against bigotry and hatred.

Johnson has a long-standing connection to the Jewish community. In addition to being a regular contributor to the Independent, he has worked with numerous organizations: Hillel BC, Canadian Jewish Congress, the Vancouver Holocaust Education Centre and the Louis Brier Home and Hospital.

“I don’t have the short answer for how I wound up in the Jewish community, so I just say bashert [destiny],” Johnson said.