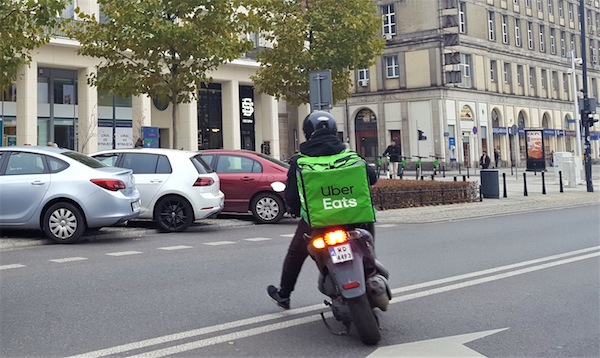 In its decision on Uber Technologies Inc. v. David Heller, the Supreme Court of Canada determined that the freedom of contract is not so absolute in its technical application as to undermine its purpose of allowing people to craft their own destinies. (photo from wikipedia)

Does fairness play a role in how we interpret and apply law? After all, doesn’t a person have the right to make bad decisions?

So, are we to interpret and apply law strictly, even if it seems unjust? Is there authority to temper the interpretation of law based on the circumstances? The Talmud tells us, yes. In June, the Supreme Court of Canada agreed.

Every businessperson knows that it’s a good idea to get an agreement in writing. We use written agreements to make a record of what the parties have agreed is their shared vision of their business relationship. Part of that shared vision might include agreeing that certain rights ordinarily afforded by the law of the land won’t apply to this relationship. The right to give up a right is central to the freedom of contract.

The freedom of contract is based on the idea that a person knows what’s best for them and wouldn’t agree to something if the bargain weren’t to their liking. The law doesn’t protect you from your own bad decisions, but it is supposed to protect you from bad decisions that you didn’t make freely.

In June of this year, the Supreme Court of Canada decided the case of Uber Technologies Inc. v. David Heller. Heller was an Uber food delivery driver. As such, he signed a standard agreement with Uber – the kind of agreement that is a “take it or leave it” proposition. Very few people read such contracts and, even if they do take the time to read and understand them, they don’t have the opportunity to create the “shared vision” that the freedom of contract is supposed to protect.

One of the terms of the Uber contract was that any dispute would be dealt with through a mediation and arbitration process in the Netherlands, rather than through the court system in Canada. Doing so would require up-front fees of $14,500 US, not including the cost of lawyers and travel. Heller’s annual earnings from Uber are between $20,000 and $30,000 Cdn. In other words, it would cost at least half of his annual earnings just to file his dispute, let alone pursue it.

The Supreme Court of Canada found in Heller’s favour.

If this had been a freely negotiated contract, Heller would have made a bad decision, but it would have been his decision to make and thus enforceable. However, it was clear to the court that Uber put this clause into the contract to make sure their drivers simply could not bring any dispute against them.

The court could have said that, according to the strict letter of the law, Heller agreed to the contract and is, therefore, bound by it. It doesn’t matter if you now find unfair a contract that you freely agreed to.

Instead, the court said the law in its strictest form is not always applicable, and we must determine whether it is inhumane to apply it strictly or whether circumstances demand we temper it. The court found that, rather than providing an alternative means to justice (i.e. arbitration), Uber imposed an unreasonable barrier to justice; they found a way to make sure that their drivers could not access justice no matter the merit of their complaint.

Many of us are familiar with the first three verses of parshat Shoftim in Devarim (Deuteronomy 16:18-16:20). First, a system of judges is established. Second, the judges are commanded to judge fairly on the merits of the cases. The third verse contains one of the most well-known phrases in the Torah: “Justice, justice shall you pursue.”

Why is the third verse there, and why does it use the word “justice” twice? The second verse has commanded the judges to follow the law without prejudice. Why then tell us to pursue justice? Isn’t that implicit in the establishment of a rule-of-law justice system? And what is “justice, justice” as opposed to “justice”?

In Chapter 2 of tractate Avot in the Mishnah, we are told, “warm thyself by the fire of the sages, but beware of their glowing coals, lest thou be burnt, for their bite is the bite of a fox, and their sting is the sting of a scorpion, and their hiss is the hiss of a serpent, and all their utterances are like coals of fire.”

At the distance where coals keep you warm, you can learn. At this distance, you can also see the coals in the context of providing warmth. If you are close enough that they can bite, sting and hiss, you lose sight of their purpose (warmth) and will be burnt. This applies to law.

Chapter 1 of Avot provides three interpretations of law’s purpose in the olam, world – olam also means the universe and everything in it.

Verse 2 of Chapter 1 says that the world stands on Torah (law), work (the practice of law) and kindness.

Verse 12 directs us to love peace, to pursue peace and to love all creatures bringing them closer to the Torah (law).

Verse 18 tells us that the world stands on justice, truth and peace.

The inclusion of kindness and peace alongside law tells us not to get so close to the coals that we forget their purpose is warmth.

“Justice, justice” is not only law, but law with purpose. Law without purpose may wear a badge of justice, but it is not truly just. Law used for the purpose of subverting justice is not just.

The court determined, in the Uber decision, that the freedom of contract is not so absolute in its technical application as to undermine its purpose of allowing people to craft their own destinies. In this case, Uber’s contract precisely contradicted that purpose: Uber imposed a contract that expressly denied Heller the right to craft his own destiny without his freely given consent.

Jeremy Costin is a business and estates lawyer practising in Vancouver. He sits on the board of directors and the governance committee of the Vancouver Holocaust Education Centre, and is a frequent guest instructor at the Law Society of British Columbia.