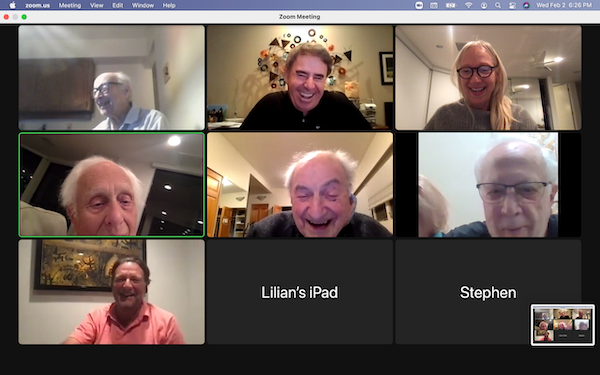 In 1948 or 1949, a group of Jewish students at the University of British Columbia started a weekly poker game. While none of the original players remain, the regular game has continued, with a few interruptions, for more than 70 years. Now, children of some of the earliest members are joining – and the “young” card players are themselves middle aged.

Murray Atnikov, now 97, joined the poker game around 1960. He enjoys playing, but it’s the kibitzing that keeps him coming back.

“The company is very, very jovial, to say the least,” said Murray. “We have a good time.”

The march of time means the faces have changed, but the endurance of the game has been remarkable. It started out as a weekly event, though it went to biweekly when the Vancouver Canucks joined the National Hockey League in 1970. Since the pandemic began, they have played via an online poker platform.

“The continuity is something that amazes me,” said Murray.

Lyall Levy, a retired family doctor who is 85, joined the group in 1964. In those days, the games rotated among the players’ homes. The players were all men and the wives would outdo one another preparing refreshments.

“It would be like going to a high-end Jewish restaurant,” Lyall said. His daughter, Carolyn Aronson, recalls having extra-special lunches the day after poker nights.

Carolyn, now 60, broke the gender barrier when she became the first female to join the men’s game. She is one of four members who are a generation younger than the other players. Her husband, Tony Aronson, also plays. Joel Finkelstein joined the game when his father, Norty, passed away, and Larry Moscovitz took the place of his late father, Bill. The others range from 81 to Murray, at 97.

As the players (and their wives) got older, they moved the games to the Richmond Golf and Country Club, to which they hope to return as soon as the COVID situation makes it reasonable to do so. When some wives complained that the men were driving home on dark winter nights, they moved the games to the afternoon, followed by noshes in the restaurant.

The group never had a name or any formal structure, but after Morley Koffman, a Vancouver lawyer who was a founding player, passed away in 2015 at age 85, they dubbed themselves Morley’s Minyan in his honour.

The players and their families formed tight bonds. Morley, a meticulous record-keeper, would hold back some of the cash from the kitty each week to put toward an annual group golfing and eating excursion in Seattle with spouses.

“I think that appeased the wives because they got to go to Seattle and go shopping or whatever,” speculated Carolyn.

While her husband joined the game in person before the pandemic, she came in only after it went online.

“They’ve never said no girls but there’s never been a woman in the game before,” she laughed. She’s not sure she’ll be invited when they return to live games.

“When we go back to live, she will be there,” her husband insisted. “The other guys will want her there, trust me.”

Her father foresees some potential gender conflicts, though.

“The problem with adding women is, I can think of at least two others whose wives are better players than their husbands,” said Lyall. Another issue, he said, is that some wives may not know how much money their husbands have been losing all these years.

It’s a friendly game – for the most part. Lyall shared tales of sharp competitiveness, referring to some players as “archenemies.”

His daughter downplayed the sharp elbows, insisting it’s all fun and games.

“It’s all fun and games to watch them get at each other,” her father retorted. “There was a lot of hostility between one player and the next. I could tell you some stories.”

“They like ripping each other,” conceded Carolyn, “especially my dad and Murray, they’re old friends.”

“I can tell – when his lip starts to quiver, he’s bluffing,” Lyall said. This puts Lyall at a disadvantage in the online game, where faces are obscured and quivering lips are undetectable.

The Aronsons used to jet off regularly to Vegas to play the game. When Lyall invited his son-in-law to join about four years ago, he warned him that the group takes things seriously.

Tony acknowledged, “When Lyall first invited me to join, he said to me, ‘Tony, you gotta think about whether you want to play.’ I said, ‘I can handle it.’”

But joining a group already (long) in progress involves some adjustments.

The games are not penny ante, but nor are the pots nothing. A hundred or a couple of hundred bucks may be at stake but the bragging rights are the real jackpot.

Recently, Murray had a big win.

Carolyn said, “I heard my dad talking to him two days later and he said, ‘I’m still walking four feet above the ground.’ He’s phoning everybody he knows to say that he won at poker.”

For the longer-term players, these connections constitute decades-long friendships.

“Some of these people he’s maintained the relationships with them for 50, 60 years,” said Carolyn.

Added Tony: “For the younger generation – Larry and Joel and Carolyn and myself – it’s just been an amazing way to connect with these people in a way that we probably couldn’t have before and it feels good that, during COVID, we have been able to put them together and give them the joy of something that they love that they couldn’t do.”