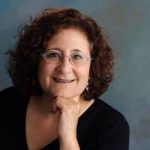 Susan Barocas is one of 40 presenters at the April 14-15 “buffet for the mind.” (photo from Susan Barocas)

Among the many presenters at this weekend’s Limmud Vancouver is Susan Barocas, writer and filmmaker, Sephardi chef and expert on the history of Sephardi cooking.

Barocas, who was former president Barack Obama’s guest chef for White House seders, will give two presentations at this year’s Limmud. On April 14, 7:30 p.m., she will speak on Tastes Across the Centuries: The Enduring Influence of the Foods of Spain’s Medieval Jews. On April 15, 10:50 a.m., she will speak on The Long and Short of Noodles, a history of noodles from ancient China to the modern day.

Barocas lives and works in Washington, D.C., where she is an active and well-known foodie. She is a regular contributor to the Washington Post, Huffington Post, Lilith and Moment, and is a member of Les Dames d’Escoffier, a philanthropic organization of women leaders in the food, beverage and hospitality industries. She was the project director of D.C.’s Jewish Food Experience. Limmud Vancouver spoke with Barocas about her unusual career and interests.

LV: In Vancouver, you are speaking about classical Sephardi cuisine. Can you give us a little preview?

SB: I am really looking forward to talking about the food of the Jews of medieval Spain, putting it into historical context. Food played quite an important role in the Inquisition. (Hint: it goes way beyond pork!) Then, I will talk about what happened to the food of those original Sephardim and the surprising influences they have on contemporary Jewish and other cuisines. Of course, I’ll be sharing recipes, too.

LV: Can you tell us more about your heritage and its influence on your career?

SB: I grew up in a mixed household – Sephardic and Ashkenazic. On one side, my grandparents were from Russia-Poland and, on the other, from the Ottoman Empire, what is now Turkey and Macedonia, descended from Jews expelled from Spain in the Inquisition. My father and mother both cooked, so we ate both cuisines – tongue, borsht, gefilte fish and shmaltz, as well as lentils, feta and olives, baklava and stuffed grape leaves.

Over the years, I have become more and more drawn to my Sephardic heritage. It is something of a mission for me to share my view that Jewish food really is international cuisine. To think of it otherwise is to miss out on so much of Jewish culture and cuisine.

LV: You describe yourself as a home cook without formal training, and yet you’ve built a very successful professional career. How did your career develop?

SB: I’ve been cooking since I was a very young child. My first career was in nonprofit public relations. Whenever I would do a special event, food definitely got extra attention from me. When I moved to D.C. in 1993, I worked for food guru Joan Nathan for a few years. My second career included writing and producing documentary and organizational films; raising my son; and teaching a course called In Grandmother’s Kitchen at a local Hebrew high school. Next, I ran the Washington, D.C., Jewish federation’s Jewish Food Experience project. Now I am well into my third career, as a food writer, chef, caterer and teacher.

LV: How does the Jewish Food Experience bring people together?

SB: The Jewish Food Experience is an innovative project of the Jewish Federation of Greater Washington. It includes an award-winning website, jewishfoodexperience.com. The goals of JFE are to use food and culture to build Jewish identity and community, particularly with certain target audiences that research showed had the greatest needs – young professionals, families with young children and interfaith couples and families. The project has become very successful with the website and programs, bringing people together and closer to their Jewish identity in many different ways.

LV: What is your most memorable Jewish meal?

SB: My most memorable Jewish meal would have to be the seders in the Obama White House, where I served as guest chef for three years. Over time, I was able to bring some of my Sephardic food to the table, so to speak, along with the Ashkenazic dishes. Even though I was working and didn’t actually sit down to eat the meal, I still get goosebumps remembering the pleasure the president and first lady expressed about the food, and also hearing from the next room President Obama’s voice booming out “We Shall Overcome” during the seder.

Elizabeth Nicholls is a volunteer with Limmud Vancouver. Chef Susan Barocas is one of 40 presenters at the April 14-15 “buffet for the mind.” To register and for the full schedule, visit limmudvancouver.ca. The fee for the conference is $75, which includes a kosher dairy lunch. Onsite babysitting is available, along with special programming for children and teens. All sessions will be held at Congregation Beth Israel.