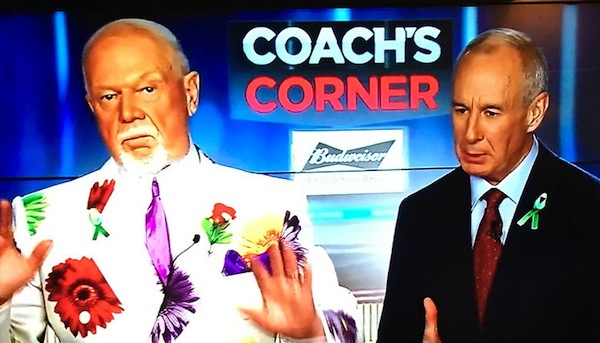 Don Cherry and Ron Maclean on screen, in 2018. (photo by Ross Dunn/flickr.com)

For many Canadians, Don Cherry and his bombastic pronouncements about hockey, but, more importantly, about society and whatever pops into his head, have been like a tolerated, occasionally amusing uncle at the family table. An opinionated crank who seems like a throwback to an earlier, less refined time, Cherry has been coming into our living rooms for decades, part and parcel with our national pastime.

But there’s a limit.

Cherry was finally told to leave the family table Monday after a rant about “you people” – new Canadians, immigrants or, as people of his inclination might characterize them, “foreigners.”

“You people … you love our way of life, you love our milk and honey, at least you can pay a couple bucks for a poppy or something like that,” Cherry said on Hockey Night in Canada last Saturday, two days before Remembrance Day. His implication was that new Canadians do not wear poppies or perhaps do so in lesser numbers than Canada-born Canadians. The Canadian Broadcast Standards Council was inundated and paralyzed on the weekend by complaints from viewers. On Remembrance Day, Sportsnet, which broadcasts the program, pulled the plug.

Cherry was unrepentant: “I know what I said and I meant it. Everybody in Canada should wear a poppy to honour our fallen soldiers.”

But that wasn’t the context of what he said. His implication was clear: immigrants take the benefits of life in Canada but do not respect the sacrifices that built the country or those who made them. That’s a far different – and more xenophobic – thing than saying everyone should wear a poppy.

Already, of course, social media grumps and trolls are declaring this the latest case of “political correctness” run amok, akin to taking “all thy sons command” out of the national anthem and all the other modernizations that threaten the hegemony of the geezer class.

Times change. People adapt or they don’t. But there are consequences in either case.

“To keep my job, I cannot be turned into a tamed robot,” said Cherry.