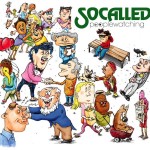 After having spent decades trying to visit Wilensky’s lunch counter, made famous by the Mordecai Richler novel and film The Apprenticeship of Duddy Kravitz, I finally made it to the weekday-only Mile End joint in Montreal a couple of months ago.

It’s a modest place with a tiny menu – two main course options, a few beverages and – for those seeking vegetables – pickles. As I finished my Wilensky’s Special (a fried bologna, salami and mustard sandwich on a kaiser) chased with a chocolate egg cream, I spotted a neighborhood fixture finishing his hotdog: Socalled (aka Josh Dolgin), the Yiddish hip-hop artist and music producer. He has been dubbed “hip-hop’s answer to Mordecai Richler.”

We made our way to a St. Viateur patio for coffee as we spoke about his latest album, his growing up in Gatineau, Que., his love for early Yiddish film, his views on Zionism, and the art of musical “sampling.” Our impromptu interview was interrupted frequently. Like the King of Kensington, Socalled seemed to know everyone in the neighborhood.

Socalled had been on my radar since my husband brought home his Passover album, The Socalled Seder: A Hip-Hop Haggadah, 10 years ago. In that album, ads for Manischewitz, along with Passover dinner table chatter, are sampled over a driving hip-hop beat; the track “The Ten Plagues” features the lyricist rapping that “sometimes bad things happen to bad people for a good reason, you dig?,” the “Miriam Drum Song” features an urgent fiddle, and the hip-hop single called “Who Knows One” is heavily klezmer inflected.

His latest effort, Peoplewatching, is perhaps more accessible musically, and is frequently quite beautiful, though whatever Jewish aspect is there is much more subtle. Still, Dolgin insists that his Yiddish interests influenced him. He explained that the track “Never See You Again” features a chord progression from an Abraham Ellstein song used in the wedding scene of the 1936 film Yidl Mitn Fidl (Am, A7, D7, F7, E7, Am – for readers with a piano or guitar nearby). There are a couple of bits of klezmer. And there is a sad and pretty song about Shabbat candles starting a fire near his Hutchison Street apartment in Mile End.

As for the sampling so integral to his music, Dolgin describes it as “giving you sounds with the atmosphere cooked in…. It’s archeological. It’s like cultural alchemy.”

My fellow Canadians in particular will no doubt be tickled by the final track, “Curried Soul 2.0.” Familiar to radio listeners as the theme to the CBC Radio nightly current affairs program As it Happens, “Curried Soul” is featured here in an extended version of the remix that CBC invited Socalled to produce. In a charming bit of hyperbole, Dolgin told a CBC interviewer that he was daunted and floored by the opportunity to tinker with the show’s theme because he “heard it every single day of my life.”

It’s not only Canadian listeners who have been privy to that storied evening broadcast: some Israelis have been featured on the show as well, including Meretz MK Michal Rozen and Tel Aviv-based pollster and political commentator Dahlia Scheindlin.

These days, beyond promoting his new album, Dolgin is busy with a Yiddish barbershop quartet he founded called Julius, in homage to the Oscar Julius Quartet. Many of the songs Dolgin’s quartet performs were originally in Yiddish translated into English, which Dolgin helps put back into Yiddish.

I was curious about what motivated Socalled to seek out Yiddish in the first place (a trip to a Salvation Army vintage record collection supplemented by a textbook called College Yiddish) and whether his continuing interest in the language and culture has anything to do with a rejection of Zionism – the nationalist movement which sought to “negate the Diaspora” in its urgent, Hebrew nation-building project (not so, in his case).

“I don’t believe in countries or nationalism,” Dolgin said, “but if we are going to live in a world with countries or nations, it’s not insane for the Jews to have a country.” He added, “I think Palestinians should have a home, too.” That said, he stressed that he is “more ashamed by how Canada has treated its aboriginal people. I’m more worried about the report on residential schools.”

Politics aside, I wondered whether Dolgin gets to speak any Yiddish these days. He does: at Yiddish festivals around the world, with an “old Jew he met in Russia” and, most often, with his Chassidic landlord. It’s Montreal’s Mile End neighborhood, after all.

Mira Sucharov is an associate professor of political science at Carleton University. She blogs at Haaretz and the Jewish Daily Forward. A version of this article was originally published on haartez.com. For an in-depth interview with Socalled, visit jewishindependent.ca/oldsite/archives/oct11/archives11oct07-01.html.