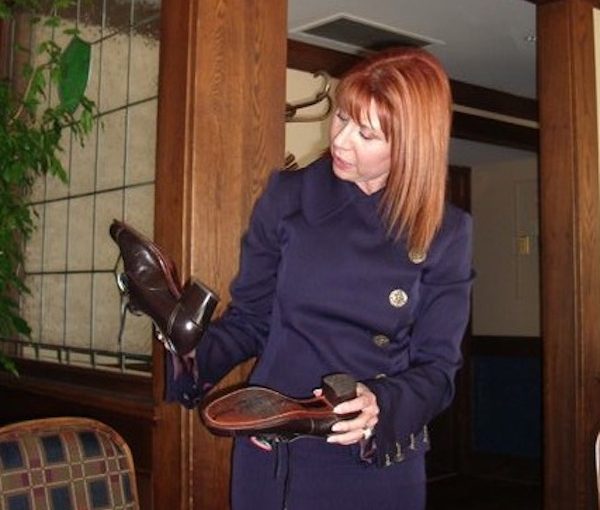 Penny Sprackman receives the special shoes on her 60th birthday, in 2006. (photos from Shirley Barnett)

Some things just happen and, before long, they become a tradition. In 1987, Harvey Shafron, while working at Freedman Shoes on South Granville, came across a rather clunky pair of women’s shoes on a top shelf and gave them to his sister, Rhoda (Shafron) Brickell.

Brickell, in turn, presented them to her friend Lola Pawer for her 50th birthday. Since then, the shoes have been passed from friend to friend among a group of Vancouver Jewish women on birthdays that end in a zero or five.

“It just happened,” said Shirley Barnett, a two-time recipient – on her 60th and 70th birthdays. “It became kind of fun to say, ‘Oh my God, it’s the shoes again.’”

The pair is not casually delivered; the recipient is formally presented the shoes at a celebration, usually at a restaurant, in front of the assembled pals.

“I really believe, as they were passed around, that it’s a story about friendship,” Barnett said. “When you reach a special age of some sort, everybody seems to say girlfriends are really important. It doesn’t matter if you’re divorced or widowed or you’re still married. At a certain age – and that could be 60, 70, 80 or 90 – a light seems to go on in women’s heads that says girlfriends are important. They are the ones you call in the middle of the night – maybe not, maybe you call your kids, I don’t know – but there seems to be an unwritten code that the older you get, you just need a few good girlfriends.”

The size 8C shoes have fit every recipient, Barnett said. A ceremonial walkabout by the birthday celebrant is a part of the ritual.

Leslie Diamond and Pawer have received the shoes five times. Sylvia Cristall and Darlene Spevakow have received them four times. Karla Marks is a three-time recipient and Carole Chark and Penny Sprackman have gotten them twice. Others who have been honoured with the pair are Maja Mindell, Shelley Lederman, Anita Silber, Sandy Magid, Esther Glotman and Cynthia Levy.

At the start, the names of the recipients were written on the soles of the shoes but, as Dorothy Parker said, time wounds all heels, and the inscriptions have become mostly illegible.

What has remained indelible are some of the remarks made by recipients over the years. Barnett, who is sort of the informal archivist of the group, has collected words of wisdom shared over the years.

“It is the friends we meet along life’s way who make the trip more fun,” said one birthday celebrant.

“Friends make good things better and bad things not so bad,” said another.

“Being older sets you free,” reflected one. “You care less about what other people think, you no longer need to question yourself. You have earned the right to be wrong and not think about what could have been or what will be.”

On one birthday, a friend declared: “Remember, growing old is a privilege and old friendships are rare. So, when your ‘old’ friends reach for your hand, grab it.”

Another gem Barnett has collected: “The better the friend, the less cleaning you have to do before they come over!”

Stuart Weitzman built up his father’s business into an empire. (photo by Phillip Pessar)

There are so many styles of women’s shoes, including the stiletto, platform, wedge, kitten, sling backs, peep toe, mule or sneakers. Unlike our favourite outfits, the fit of our shoes doesn’t change much in relation to our waistlines. A great pair of shoes can boost our confidence and turn a “shlumpy” outfit into something eye-catching. Marilyn Monroe declared, “Give a girl the right pair of shoes and she can conquer the world.”

Renowned designer Stuart Weitzman was born into a shoe business family. But, while his father had started a shoe company in Massachusetts in the 1950s, Weitzman’s goal was a career on Wall Street and he went to and graduated from the Wharton School. However, after his father died, he started to make the transition from talented hobbyist sketcher to acclaimed shoemaker. His strong work ethic coupled with an eye for style created the prevailing Weitzman empire. His designs flew off the shelves of upscale stores and filled pages of top fashion magazines.

In 1971, Weitzman partnered with a Spanish shoe factory, Caressa. In 1986, Weitzman bought all the shares from his Spanish partners and became independent. Success over the years led to Weitzman’s ownership of nine factories throughout Spain, which granted him the ability to keep his upscale shoe brand at a price 30% to 50% lower than that of his contemporaries. At his peak, Weitzman owned 120 private boutiques and sold globally in department stores.

Fifty years in the business has attracted a large following of shoe enthusiasts to Weitzman’s creations, including celebrities like Beyoncé, Kim Cattrall, Jennifer Aniston and Taylor Swift. In 2002, Weitzman fashioned a pair of million dollar shoes, almost literally dripping in diamonds, worn by actress Laura Harring to the Academy Awards. He also designed the most popular nude sandal worn among celebrities, which has become a classic and essential for many women.

Weitzman sold his company to Coach for an estimated $574 million in 2015. At the age of 76, he remains the creative director. It is now Weitzman’s wish to find a successor, as his two grown children, Rachel and Elizabeth, have chosen different routes.

Weitzman and his wife, Jane Gershon, worked together to build the business. Together, they also became philanthropists, donating to many causes, but also establishing the foundation Pencils of Promise, which focuses on opening schools in Ghana, Laos and Guatemala.

Weitzman and Gershon are passionate about their Jewish roots and work to ensure the future of Jewish communities and Jewish heritage. Consequently, a substantial amount of their contributions and time commitments revolve around Jewish institutes and causes around the world.

A man used to working 16-hour days in a creative environment doesn’t seem set on a quiet retirement. The list of projects he has planned is long. A top priority is constructing a Jewish museum in Madrid dedicated to Spanish Jewry. On the horizon is producing a Broadway musical with Sir Trevor Nunn about the life of Andy Warhol.

Just in case the wedding superstition is true, let us do as the bride is advised – whatever our footwear, let us remember to exit with our right foot first to ensure a lucky day.

Ariella Stein is a fashion writer based in Israel.