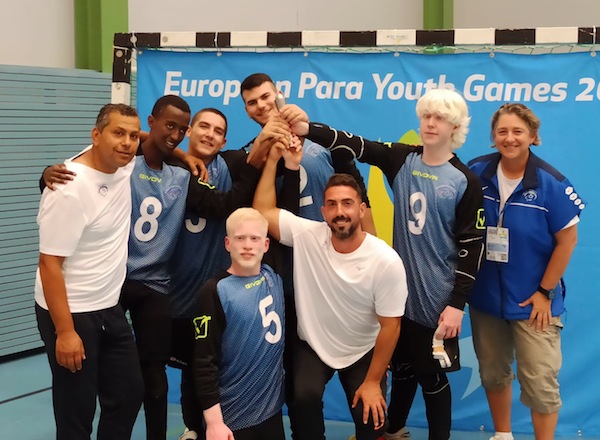 Can you imagine a sporting event in which the audience sits in silence? Well, this is how goalball is played. Why? So that the visually challenged players can hear the bells inside the game ball.

And, speaking of the ball, it differs quite a bit from a soccer ball. In addition to having eight small holes in it – which allow the players to hear the two bells inside of it – the hard rubber ball is approximately 76 centimetres in circumference and weighs 1.25 kilograms. By contrast, a standard soccer ball has a circumference of 68 to 70 centimetres and weighs significantly less, between 400 and 450 grams.

To ensure fair competition, goalball participants must wear opaque eye shades. All international athletes must be legally blind, meaning they have less than 10% vision and are classified as B3 (partial sight), B2 (less sight than B2) or B1 (totally blind).

The goalball court has slightly raised markings so each player knows where their post is and the game is played indoors on a court measuring 18 metres long and nine metres wide, usually with short walls to help keep the ball inside. Again, this is different from soccer, which is played on a field that is 125 metres by 85 metres.

Each game is broken down into two 12-minute sessions with a three-minute break between the first and second halves. There are six players on a goalball team, with just three members playing at any one time.

Each goalball player has a specific job. The centre is the most responsible for defence, as they have the ability to support the left or right wing. The right winger defends the right-hand side of the goal and the left winger the left, but both are also main attacking players. The objective, as with most such games, is to score the most goals.

The team area is the first defence section, which starts from the goal line. In this area, defenders are allowed to block and control the ball to stop it from entering the goal.

The landing area starts at the end of the defence line. In this section, the attacking player can move around to take a shot at the opposing goal. The neutral areas are safe zones that provide space for defending teams to hear the ball coming towards them.

Players protect the goal on their hands and knees. Unlike in soccer, the ball is not kicked, it is thrown from either a standing position underarm, or rolled. To reduce the sound and make it difficult for the opponents, players try to release the ball close to the floor. They can also make the ball quieter by spinning it. The team is given a foul if their player doesn’t throw the ball within 10 seconds of touching it.

Blind soccer, another sport played by visually challenged players, differs from goalball in several ways. For instance, while players in both games wear eye covers, players in blind soccer chase the ball in an upright position. Blind soccer halves are longer, at 20 or 25 minutes, and, in blind soccer, each team has five players on the pitch at any time, four outfield players who are visually impaired and a goalkeeper – who need not be visually challenged.

Israeli goalball coach Raz Shoham said most of the injuries in the game come from over-use of the body and not from being hit by the ball. In Israel, players’ free time is limited by the fact that almost all of them work or study.

Before each practice, there is a 40-minute warmup session in which players exercise their torso, hands and legs. Practices are held on Thursdays and Fridays in four locations: Beer Sheva, Jerusalem, Tel Aviv and Afula. Men and boys practise mostly in Afula, while the women practise mostly in Jerusalem. Practice times are a function of when the sports auditorium is available.

Traveling can sometimes be an issue. Shoham explained that a strong player showed up at the team’s summer camp and wanted to continue playing after the summer ended, but there was a problem getting her from her village to practices. On the other hand, sometimes players leave the sport for a stretch of time and then return. Take Orel, who started playing while still in elementary school, left for a few years and now, at the age of 15, is a key player on the male youth team.

According to Shoham, goalball players range in age. At the moment, the oldest person who comes out to play is a 65-year-old grandmother. Currently, on the official playing teams, the oldest player is 35. The official team players get a few thousand shekels for playing, but it is not like regular soccer, in which team members frequently earn high salaries.

Coach Snir Cohen knew before the tournament that he had good players, but said he just didn’t know how good. His goal is developing this youth team into a strong adult team.

Nineteen-year-old player Lihi Ben David, who plays left wing, spoke with the Independent about her recent training experience in Brazil. The cost of the trip was largely covered by the Israel Sports Association for the Disabled (ISAD). The Israeli and Brazilian players conversed in English. She said it was refreshing to learn about a different culture. The hard part for Ben David, who is an observant Jew, was playing during the nine mourning days of the Hebrew month of Av.