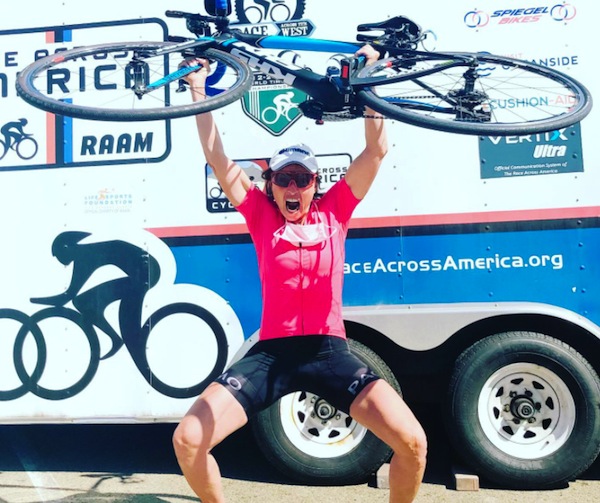 Leah Goldstein is the first woman, and the first Israeli, to win Race Across America. (photo by Vic Armijo / RAAM)

The 5,000-kilometre race – from Oceanside, Calif., to Annapolis, Md. – must be completed in under 12 days, and Goldstein completed it in 11 days, three hours and three minutes, rolling past the finish line at 9:41 p.m. on June 26.

“Race Across America (RAAM) is like no other race,” Goldstein told the Independent. “I’ve done the equivalent of the Tour de France for females. I’ve done major races and other ultra endurance races of 500, 800 miles, and nothing compares – because it’s not a matter of if, but when you’re going to experience all sorts of discomforts, back, neck, knee, constipation, diarrhea, swelling, some major saddle sores.”

This was the latest in a lifetime as a top athlete. Goldstein won the 1989 World Bantamweight Kickboxing Championship and was Israel’s duathlon champion. As a youth, she was a kickboxing champion and a Taekwondo champion. Later in life, she competed in a string of professional cycling events. That toughness carried forward to her becoming an officer in the Israeli commando and elite police unit.

This year’s race was particularly extreme, during a heat wave that punished riders with temperatures of more than 40°C; not just through the desert, but for the first eight days.

“That can break people down, where they almost feel defeated before they start, but that’s the thing with RAAM, those things are going to happen whether you like it or not, and you have to prepare for them,” said Goldstein. “It’s really something that pushes you far beyond your limits. You’re going to have more bad days than good days, and that’s just the challenge.”

During certain parts, she said she had hallucinations and her “brain felt like a potato.”

“I didn’t know what I was doing on my bike. I didn’t know where I was. And then you kind of snap out of it,” she explained. “It’s that element of the mental challenge of really pushing forward, knowing that whatever you’re doing, you just can’t get off the bike, no matter what the situation, the temperature, no matter what kind of pain you are in.”

It helped that this was her third RAAM, she said, and the crew was able to analyze past performance to build on it.

“We wrote down every single mistake that we made in 2019, with weather conditions, navigational problems, bike positioning, training, with sleep patterns, and we tried to perfect it as much as possible. And because of COVID last year, I had an extra year to prepare for this. I trained as if RAAM was still going to happen.”

Her onboard crew included a medic, a kinesiologist, massage therapists and nutritionists. “I think they know how I roll, and know how to read me on the bike, when I’m starting to fade or things are going sideways, or I’m low on nutrition,” she said. “We won as a team.”

Whereas riders fought the heat this year, they fought “uncontrollable rain and hail” two years ago. The crew prepared her with specialized clothing and pre-tested water-resistant equipment, just in case those conditions would prevail again.

“Prepare for the worst that possibly can happen, no matter how fully prepared you think you are,” she said. “It’s a matter of how badly do you want it, and how much are you willing to sacrifice.”

And Goldstein has experienced severe challenges. In 2005, during the Cascade Classic, she was involved in what she calls “the mother of all crashes” – she landed on her face at 80 kilometres an hour, “breaking practically every bone in my body, ripping my face right off.” Doctors were astonished she survived. In 2008, she was hit by a car, ejected 25 feet in the air and, in an attempt to cushion the fall, put her arms out, breaking both of them.

Neither accident kept her down. She returned to the racing circuit in 2011, winning the women’s solo category of Race Across America, breaking the previous record by 12 hours.

In 2016 she published a memoir, No Limits, outlining the triumphs and tragedies of her athletic life.

While the naysayers – who called her “insane and crazy” – said she was “past her prime,” the 52-year-old proved them wrong.

“Don’t use your age as an excuse or your past experiences as an excuse,” she said. “We don’t get second chances. What we got is what we got and, if you have a desire to do it, goddamn do it. What are you waiting for?”

Because of the high temperatures, the latest race took her a couple of days longer than expected, but she said the next one she plans on doing in under 10 days – and she’ll keep competing until she can’t anymore.

Dave Gordon is a Toronto-based freelance writer whose work has appeared in more than 100 publications around the world. His website is davegordonwrites.com.

With 13 parties in the Knesset – and several of those umbrellas encompassing a variety of factions – patching together a coalition will be a challenge. It may not be possible at all, meaning Israelis would see their fifth election within a little more than two years.

Whatever pileup of strange bedfellows eventually manages to form a government, one particular possibility should be especially disconcerting.

To enhance their chances of passing the electoral threshold, three far-right parties united under the banner of Religious Zionism and succeeded in taking six Knesset seats. The Religious Zionist party, led by Bezalel Smotrich, seeks to annex all (or part, depending on which faction you listen to) of the West Bank and adheres to a familiar litany of Israeli far-right policies.

For this round of elections, they partnered with another small faction, called Noam, whose platform ostensibly seeks to create a halachic theocracy. In practical terms, the party is obsessed with homosexuality and seeks to delegitimize LGBTQ+ Israelis and roll back legal protections and equality. In addition to attacking gay people, the party has equated Reform Jews with Nazis and Palestinian terrorists who “want to destroy us.”

The third rail in this extremist triumvirate is Otzma Yehudit (Jewish Power), which is a descendant of the outlawed racist party Kach, led by the American-born fanatic Rabbi Meir Kahane, who was assassinated in 1990.

When Kahane was in the Knesset, before a law was passed to bar overt racists from elected office, all other members of the assembly would walk out when he rose to rant against Arabs. In an eerie echo of the Nuremburg Laws, Kahane sought to legally prohibit sexual relations between Jews and non-Jews, among other far-reaching extreme positions.

An indication of the shifts in Israel’s body politic over the decades is evidenced by the fact that the incumbent prime minister, Binyamin Netanyahu, worked behind the scenes to get these small extremist factions to cooperate in order to reach the electoral threshold. While previous prime ministers – and every other member of the Knesset at the time – refused to listen to the hateful rhetoric of Kahane, this prime minister helped ensure his ideological successors would be represented in the Knesset.

It is bad enough that these ideas will be given a legitimacy they do not deserve by mere dint of their advocates being members of the Knesset. As a small rump of crazed zealots, they should be ignored and shunned. Instead, they will play a central role in the determination of who (if anyone) forms the next government.

It is worth recalling an incident in Austria, in 2000, when the xenophobic, racist and arguably neo-fascist Freedom Party, led by Jörg Haider, entered into a governing coalition in that country. The government of Austria to which Haider belonged was sanctioned and condemned by governments worldwide and other member-states of the European Union ceased cooperation with Austria’s government.

While the Abraham Accords have reduced Israel’s diplomatic isolation dramatically, the country still faces unjust judgment in the court of global opinion. If a new governing coalition includes a segment of enthusiastic homophobes, misogynists, racists and ethno-religious supremacists, a universe of denunciation would rain down on the country. And rightly so.

In what may be an irony of historical proportions, that ugly scenario could be prevented by another stunning development on the other end of the political (and ethno-cultural) spectrum.

A new Arab party, called Ra’am, has bolted from the conventions of the Arab political sector and adopted a pragmatic approach. Rather than the purely oppositional stands taken by the other Arab parties for decades, Ra’am seems prepared to play the game that small Jewish parties have excelled at. In a fractured political culture, the tail often wags the dog. Ra’am, led by Mansour Abbas, seems to understand the opportunity this presents. Strangely, this Arab religious party could find common cause with Jewish religious parties on issues like funding for parochial education and other community needs (as well as its apparently virulent hatred of homosexuality).

As the horse trading begins in earnest this week to patch together a quilt of some ideological consistency in the Knesset, Ra’am is sitting in one of the most enviable positions of potential power, possibly able to extract all sorts of treasures out of a leader desperate for their crucial four votes. The only thing they have explicitly ruled out is any situation that would enable groups like Religious Zionism, Otzma Yehudit and Noam.

How ironic it would be if Israel were saved from its own worst angels by an Arab political party that learned its capacity for power from watching the fringe elements on the other side of the Knesset.