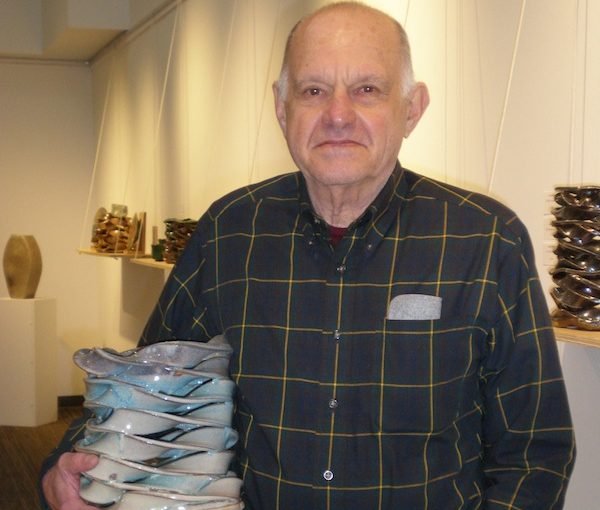 Dr. Yinon Shivtiel, left, and Dr. Danny Syon inside the cave where large wine jars, a cooking pot and other pottery more than 2,000 years old were salvaged two weeks ago in a joint operation of the Sefad Academic College, the Israel Antiquities Authority (IAA), the Israel Cave Research Centre and the Israel Cave Explorers Club. (photo by IAA from Ashernet)

In 2017, Dr. Yinon Shivtiel, a speleologist and senior lecturer at Sefad, conducted a survey in Western Galilee, aided by the Israel Nature and Parks Authority, to locate caves that served as shelters and hiding places. He discovered a cave high on a sheer cliff, under an overhang, which contained ancient pottery vessels. “As a first impression,” said Dr. Danny Syon, senior archeologist with the IAA, “the finds seem to date to the Hellenistic period: between the third and first centuries BCE…. We assume that whoever hid here escaped some violent event that occurred in the area. Perhaps by dating the vessels more closely, we shall be able to tie them to a known historic event. It is mind-boggling how the vessels were carried to the cave, which is extremely difficult to access. Maybe an easier way that once existed disappeared over time?”

The faces that Larry Cohen creates communicate a range of emotions. (photo by Olga Livshin)

Larry Cohen has been working with pottery, on and off, for about 30 years. “A long time ago, I tried to make money from it, but not anymore,” he told the Independent. “Now, I just make things I want to make, things I love.”

Touch and Fire, Cohen’s solo show at the Zack Gallery, highlights the things he likes: elegant but aloof vases, functional bowls made with salted fire, and expressive faces cut into clay – manifestations of the artist’s pains, hopes and desires. “Clay registers every touch,” he said, “expressing the character of a particular place, time, person or purpose.”

With a few touches of his fingers, a few slashes of a knife across a thin clay slab, Cohen manages to convey a multitude of emotions. Every face he has made is unique but, together, they represent the artist’s inner core.

“Sometimes, you have dreams,” Cohen said about his faces. “Good or bad, with faces you recognize or you don’t. Dreams are part of us, part of the human psyche. My faces are mysteries; they’re my imagination. I started making them in 2015 and I call them ‘manifestations.’”

Every other piece on display in the gallery – vases, teakettles and bowls – the artist calls “pots.” Some of these he creates on his pottery wheel, while others he builds from the slabs of clay like sculptural ceramics.

“When I start working with a piece, I know approximately what I want to make, but there are so many different steps along the way,” he explained. “I have to pay attention to what is already done during each step as much as to what I wanted in the beginning. Every step holds a surprise, although some surprises are better than others. Sometimes, things fail technically – like crack in the kiln – and you can only cry. It’s humbling, when the technical stuff affects the end result as much as your skill or your vision. The more I work with clay, the more I realize that there is still so much I don’t know.”

He is learning new things with every pot he makes and, in three decades of working with clay, he has learned quite a lot, but the unknown always beckons.

“I don’t like doing the same things, like factory production. The machines can repeat the same patterns and colors endlessly and sell them in department stores. The pottery coming from machines is perfect and the same. I’m not interested in doing that. I want to experiment; I try something different all the time. My every pot is unique.”

His craving for the new and surprising has guided him as much in his professional life as it has done in his art. In his life, he has been a criminal lawyer and a University of British Columbia law instructor, he did a stint as a commercial fisherman, worked as a building contractor and managed a Japanese restaurant. “Life is interesting when you try different things,” he said. “I’ve been lucky to be able to do what I wanted.”

Whatever he was doing to earn his living, art always occupied a part of his soul. He has never stopped creating in a variety of forms, from simple teacups to complex sculptures, and clay has been his passion for years.

“It’s nice to work with clay,” he said. “It’s meditative and it engages me completely. It’s good for your health but it’s hard physical work. First, you have to prepare clay, to ‘wedge’ it, like kneading dough. Then you make a pot, but afterwards it has to dry completely before you fire it the first time. Only after that, when it cools, you can apply glaze and fire the second time.”

Cohen has two kilns in his studio on Cortes Island. In one, he fires with salt to create texture on his pottery; the other is for smooth surfaces. “In the summer, I spend months on Cortes Island, working in my studio every day. In other seasons, I do it occasionally, too, every few weeks. When I’m there, I work in the studio, but I’m not as young as I was before. It’s getting harder to work long days.”

His artistic creations run from utilitarian to high art. “A difference between art and craft is hard to pinpoint,” he said. “It’s a continuum. On one end is pure craft, the functionality. A teapot has to hold water to make tea. On the other end is pure art, like my faces. They don’t have to do anything. But, mostly, you’re in the middle. Every pot – a vase, a bowl – has to be both functional and esthetic. Pottery at its best is both useful and beautiful, and skills are necessary to achieve both goals. Most of the time, it’s a mixture. I’m as much an artist as a craftsman.”

Unfortunately, he admits, he is not much of a salesperson. “I don’t sell as much as I wish. I want to sell more to have room for new things,” he said with a smile.

Touch and Fire opened on Jan. 14 and will continue at the Zack until Feb. 7.