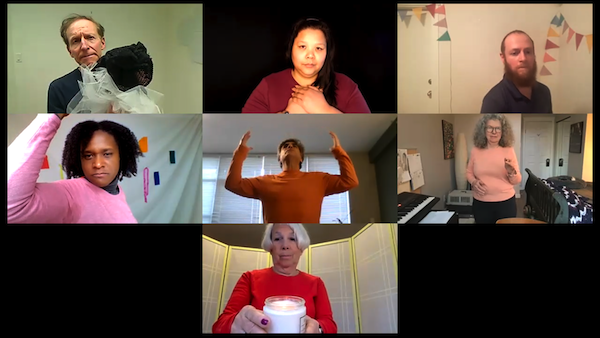 If you want to see tikkun olam in action, see the next performance of Vancouver Playback Theatre (VPT). For the last 23 years, the ensemble has been retelling audience participants’ life stories with sensitivity and compassion.

At VPT’s March 6 show, brightly coloured scarves, banners, dance, piano music and improvisation “played back” individual audience experiences of and the accompanying emotions caused by antisemitic events and other forms of discrimination.

Fellow Jewish community and troupe member Joel Bronstein added, “Our work takes audience members out of their heads and into their hearts … when people share their feelings and life experiences in a safe and supportive environment, there is a collective opening of our hearts, even when it is light and funny.”

Playback Theatre was created in New York 47 years ago with the intention of returning theatre to its storytelling and community-building roots. With troupes now established worldwide, Playback Theatre directly engages participants in sharing experiences and ideas related to themes of importance to them individually, and as groups, organizations and communities.

Abrams, Bronstein and Carol Ann Fried, who is also a member of the Jewish community, have all been part of the ensemble for more than two decades. Fried’s most memorable audience story involved a father talking about the love he had for his son.

“As he was speaking,” she said, “I wanted to sing a song about his love. I knew there was a Cat Stevens song called ‘Father and Son’ but I couldn’t remember the words or the melody. The only song I could think of was ‘You are the Wind Beneath My Wings,’ and I sang a few lines.”

After the show, the father told Fried that he had made a video of his son when his son was younger and the sound track was “You are the Wind Beneath My Wings.”

Abrams remembers a story about a woman who found herself attracted to two men who were both interested in her, and she was wondering what to do about her pleasant dilemma.

“In the playback, myself and another male actor represented the two suitors in an old-fashioned duel that was a slow-motion dance, also using fabrics,” said Abrams. “We ended in a draw, appealing to the teller [audience participant] to decide. The teller and the audience loved it, and the teller realized she didn’t need to rush any decision, and decided just to enjoy the experience.”

There seems to be no limit as to what can be expressed in performances with VPT and what insights can be gained.

Bronstein remembers when he had to play back a story about a violent character. “Although I symbolically represented the violence, when the story was finished my body was shaking intensely,” he said.

It’s not surprising that VPT works with organizations that help others, such as the Kitsilano-Fairview Mental Health team and Oxfam Canada.

“When we do a workshop for an organization or a community group, we often start with a short performance on an issue, and follow this with breakout groups where participants can dialogue on what they’ve learned and where to go from here on the issue,” Abrams said. “The groups we work with are focused on progressive social issues, so we contribute to forward movement on these issues through our workshops.”

VPT offers a variety of services, including public and conference performances, workplace conflict resolution workshops, peace-building in schools, community engagement projects, and Playback skills training, in person (when possible) and virtually (via Zoom).

Fried said she has learned a lot about the human condition through working with culturally diverse audiences. “Although our lives, cultures, religions and life experiences are different, we all value and care about the same things,” she said. “We all have the same variety of feelings. I feel connected on an internal level with each teller.”

When they aren’t together storytelling, Fried runs her own company and is a keynote speaker, workshop leader and coach; Bronstein is the executive director of Little Mountain Neighbourhood House; and Abrams runs his own organizational development consulting business.

The other members of the ensemble are Diandra Lee, Laen Hershler, Ingrid Brousillon, Louise Lemieux, Laurie Damer and Matthew Spears.

The troupe’s website is vancouverplaybacktheatre.com. Their next online public performance will be on June 26 in honour of World Refugee Day, which is June 20.

Cassandra Freeman writes stories with the support and love of her husband, Irwin Levin.