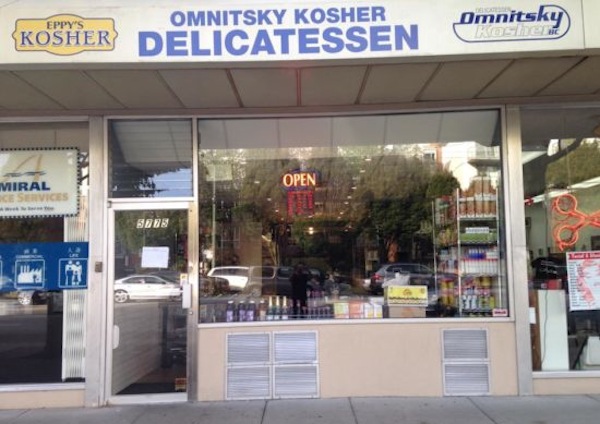 There was a time – at least within the lifetime of older readers – when there seemed to be a kosher butcher on every corner of Winnipeg’s old North End. An exaggeration, maybe, but, in the 1930s, there were enough kosher butchers in Winnipeg to form their own shul. The last kosher butcher in Winnipeg – that would be Omnitsky’s – closed in 2008 and, at about the same time, fresh kosher slaughter also came to an end in the region.

Now, Omnitsky Kosher in Vancouver – the offspring of Omnitsky’s in Winnipeg, and the last kosher butcher in Western Canada – is also facing the prospect that the end is near.

“I love my business and the people I am able to interact with,” said Eppy Rappaport, the long-time owner of Omnitsky, “but I am getting tired. I am 65. I would never want to feel that my business is becoming an anchor pulling me down.”

The son of the late Elaine and Rabbi Shalom Rappaport (who is remembered fondly by two or more generations of Rosh Pina Synagogue families) was in Winnipeg the weekend before last for a family simchah and sat down with this reporter to reminisce about growing up in Winnipeg and his career as a kosher butcher, both in Winnipeg and Vancouver.

The Rappaport family arrived in Winnipeg in January of 1967, when Rabbi Shalom Rappaport began his 20-year tenure at Rosh Pina Synagogue.

“I was 10 years old,” Eppy remembered. “We were coming from San Diego. Morley and Shiffie Fenson met us at the airport with parkas, gloves and toques.

“I had been promised that I would have a lot of fun playing in the snow. I was really eager to build my first snowman – but quickly learned that snow in Winnipeg in January was not the right kind of snow for a snowman.”

The third of four siblings, Eppy, on arrival, was enrolled in Grade 4 at the Talmud Torah on Matheson and continued on to Joseph Wolinsky Collegiate at the same location to graduation in 1975.

Eppy has particularly warm memories growing up with members of the Benarroch family. “My brother, Danny, and I were close to all four of the Benarroch brothers – Yamin, Joseph (Yossi), Michael and Albert. They all felt like brothers to us,” he recalled.

“We grew up with the Benarroch kids,” Eppy said of him and his brothers and sister. “Our two families spent a lot of time together because of our shared religious observance. Every Sunday in the spring and summer, the Benarroch clan would spend the day at Birds Hill Provincial Park and we would always be included.

“Generally,” he continued, “I found the Jewish community in Winnipeg to be warm and loving. Even after having been away for 22 years, the social connections I made here remain strong.”

Eppy was studying sociology at university – working on his master’s at the time – when Bill Omnitsky approached Rabbi Rappaport about wanting to sell his kosher butcher shop. “Dad asked me if I would be interested in going into the business,” Eppy recounted. “I was planning on taking a year off from university in any case and decided to give it a try. I never looked back.”

Eppy joined Bill Omnitsky in business in 1973 and bought the store outright in 1983.

“Bill Goldberg was my first customer,” Eppy recalled. “I still have that first dollar from him.”

While the young kosher butcher may have loved Winnipeg, one feature he didn’t like was winter. Thus, in 1995, he turned Omnitsky’s in Winnipeg over to his older brother, Alan, who had previously joined him in business, and moved to Vancouver, where he opened Omnitsky Kosher, the only kosher butcher shop in the city. (Alan Rappaport subsequently ran into health problems and sold the store in 2002.)

“I was ready for my next challenge,” Eppy said of his decision to open a second Omnitsky in Vancouver. “People in Vancouver were welcoming. Many told me how much they appreciated having access to fresh kosher meat.”

While British Columbia’s Jewish population is around 30,000, the religious community, naturally, is much smaller. “Nonetheless,” he said, “people like quality products. Many of my customers aren’t Jewish. There are a lot of Muslims, for example, who shop at our store.”

In 2015, Eppy relocated, moving Omnitsky Kosher to a larger location in what used to be Kaplan’s Deli, which had closed after 55 years in business. In his new premises, Eppy also opened a deli.

While the government-imposed COVID restrictions of the past two years have been challenging for many small businesses, that has not played a role in Eppy’s desire to sell. “Our business actually thrived over the last two years,” he said.

Eppy doesn’t have a timeline yet. He said he doesn’t want to leave his customers in the lurch (that includes some members of the Winnipeg community who have organized to occasionally bring in by truck large orders from the Vancouver butcher shop). However, if he can’t find a buyer, at some point, he will have no choice but to liquidate the business.

While Eppy is contemplating divesting himself from his own business, he is not yet ready to retire completely. “I would like to keep working in the food business in some capacity,” he said. “I may be able to help other businesses from an operational perspective. That I consider my specialty.”

Incidentally, Eppy and his wife Ellen (the daughter of the late Albert and Sheila Lowe) have two daughters, Aviva and Lauren, who are both pursuing careers in the food sector. Aviva, the proud father reported, is working on a second master’s degree at McGill University in the field of dietetics, while Lauren works as a senior scientist for Starbucks in Seattle.

On the evening of May 14, members of the Jewish community joined with members of the Japanese, Russian and Chinese communities to raise funds for earthquake relief efforts in Nepal. Held at Omnitsky Kosher Delicatessen, the restaurant’s proprietor, Eppy Rappaport, donated a percentage of profits of that evening’s sales, and attendees made individual contributions throughout the evening.

The evening was organized by Ruth Erlichman and Dickson Tsang, two longtime Vancouver realtors who have know each other for more than 15 years. The two have “done quite a few deals together,” Erlichman said, “during which time Dickson got to know a little bit more about Jews, kosher food, keeping Shabbos, etc. He has been involved in many fundraisers in the past and wanted to do one together … bridging the two cultures and adding our Japanese and Russian friends to the pot.”

The theme of the evening was giving and practising compassion, as “stated in the Torah in parashat Shemini,” Erlichman added. “Making sure we have emunah [faith] that Hashem will help when we personally, G-d forbid, encounter hardship. When it comes to other people’s hardship, we take out our chequebook – we don’t tell them to have emunah; that comes later.”

About 30 people attended, including a representative from the Nepalese community who updated the group on the situation on the ground in Nepal. A strong aftershock had occurred just two days prior and the Canadian government had pledged to match dollar for dollar the money raised until May 25. The funds raised at Omnitsky are being donated through the Red Cross.

“Our Japanese friends showed us how to make paper origami cranes,” Erlichman shared. These were sold at a much larger fundraiser held at the River Rock Casino soon after the Omnitsky gathering.

Born and raised in Kobe, Japan, Erlichman said she is “very familiar with earthquakes. Many of us from the Jewish community here held a fundraiser for the Jan. 17, 1995, Kobe earthquake, at the Tama Sushi Lounge on West Broadway, co-owned by the late Mr. Leon Kahn. Funds were sent through the Joint [Distribution Committee] to the Ohel Shlomo Synagogue in Kobe, which incurred exterior damage.”

Kreplach. Smoked meat. Tongue. Turkey pastrami. Salami and eggs. If this list of dining options makes your mouth water, read on because the new Omnitsky’s is open for business.

Taking over the location previously occupied by Kaplan’s, Eppy Rappaport has done a gut-renovation of the space in order to create a 21st-century kosher deli. The new Omnitsky’s has actually been open since just before Rosh Hashanah, but only for the retail end of the business. After a number of setbacks, Rappaport was able to cut through the last of the tangles of red tape and, once the licensing came through late last month, he was able to unveil his brand new restaurant and kitchen.

About the delays, Rappaport was pragmatic. “I want it to be right,” he told the Independent. He’s excited to reveal the new space to the public. At long last, he said, his dream is coming true.

The new Omnitsky’s concept is different from the old store on Cambie at 43rd Avenue. There has been a reduction in dry goods available, but a large expansion of the refrigerated and frozen sections of the retail space. The increase in retail and take-out deli products reflects an emphasis on the expanded menu the new Omnitsky’s has on offer.

“The designer and contractor got the maximum out of the space,” Rappaport explained, adding that he hopes the look and layout will foster positive dining and shopping experiences. The deli has a traditional feel, with both food and décor to match. There are tables with banquets along the walls and the fresh deli counter is located at the back by the kitchen.

Rappaport has developed several new products, as well, including an apple turkey sausage that is nitrate-free, along with other sausages he makes himself in his plant on Annacis Island. “We have an expanded product line including fresh baked goods, salads, four soups every day,” he said. There will be the usual chicken soup with noodles or kneidelach, but now you can add kreplach, as well.

Alongside an array of deli sandwiches, there are several hot items on the menu, including kasha and shells, knishes, three kinds of hot dogs with five choices of toppings, and turkey shwarma. Omnitsky’s signature dish? “Deli done the old-fashioned way,” Rappaport said proudly.

Not only has he added variety to the menu, but Omnitsky’s hours are also extended. Monday through Thursday, he plans to serve breakfast, lunch and an early dinner, staying open 8 a.m.-8 p.m. Friday and Sunday, he will be open for breakfast and lunch – with plenty offerings to take home for dinner. To satisfy those who crave breakfast all day, he said that salami and eggs, a classic, is an all-day affair.

Rappaport is thrilled that his restaurant is finally open for business and reaching a new and expanded clientele. The Oak Street location has brought him a much bigger client base, he said. “People remember the old Kaplan’s. I’ve had old Kaplan’s customers returning, wishing me luck and waiting for the restaurant to open.”

Along with the street parking available for much of the day, Rappaport said there are 20 or so parking spots behind the restaurant. He believes that the growth in the kosher meat business is on the restaurant side of things and, with his new and expanded menu and a loyal customer base, he’s ready for things to really take off.

One of the well-loved features of Kaplan’s was the baking, the desserts that reflected an Old World taste and style. Fortunately, Rappaport said that the same woman who baked those familiar treats is working in his new kosher kitchen. This is welcome news for people who are looking to nosh on a shtikl kuchen after a chazerai of smoked meat on rye.

Wait no more, lovers of kosher meat and all that it can become. Omnitsky’s doors are open and the blue tarp that has covered the rear half of the store for months is gone. Whether it’s a trip down memory lane you’re looking for or a new culinary experience with an “old” twist, the only classic kosher deli west of Winnipeg is open for business.

Michelle Dodek is a freelance writer and community volunteer living in Vancouver.