Despite its flaws, most Canadians are proud to call this country home. And most of us would leave it at that, and not delve too much into why we feel that way. But a recently published book asks 20 scholars to consider the question, “Has there ever been a better home for the Jews than Canada?” The result is a compelling read that raises many more questions than answers.

No Better Home? Jews, Canada and the Sense of Belonging, edited by David S. Koffman of York University, was published by University of Toronto Press last year. While many of us may not rush to pick up an academic publication, for fear of its denseness and potential incomprehensibility for laypeople, this one is surprisingly readable. Not every essay will be of as much interest, as the book is Eastern Canada-centric, but many of its ideas will help us in determining for ourselves what we mean when we say Canada is one of the best places in the world to live. And some of its discussion will prod humility – for example, the reality that many immigrants to Canada would rather have been able to stay where they were, but had to flee persecution, war or other circumstances, is a sobering reminder. As is the fact that the situation in Canada has not always been good for Jews or other minorities.

An exact measurement of “best” is elusive and subjective, of course. As editor Koffman notes in his introduction, “Canada may now very well be the safest, most socially welcoming, economically secure, and possibly most religiously tolerant home for the Jews than any other diaspora country, past or present. Jews in Canada today enjoy (1) high rates of voluntary religious participation at all denominational in-points; (2) relatively low rates of nonviolent forms of antisemitism; (3) high degrees of Jewish literacy; (4) the capacity to exercise political power unfettered by antisemitism; (5) institutional completeness for Jewish communal needs; (6) thoroughgoing social acceptance; (7) significant cultural production; (8) public recognition; (9) comparatively low intermarriage rates; and (10) economic opportunities unrestricted by their Jewishness.” 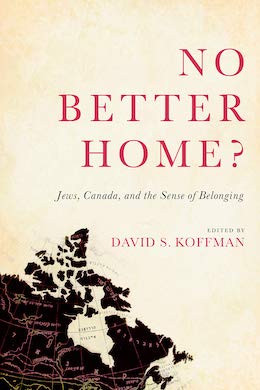 That said, the matter is not so easily determined, as the other contributors to the volume delve into Canada’s past, into other countries that offer good homes for Jews, into the accessibility and affordability of Jewish education, into Canada as a point of arrival for Holocaust survivors, into Yiddish not only as a language but as a link to family, heritage or tradition, and into many other topics.

The situation in Ukraine makes Jeffrey Veidlinger’s essay particularly interesting for anyone wanting to know more about that country and the influence of its history and its emigrants on Canada. For instance, Canada’s multiculturalism policy was a concept introduced in the 1960s by Ukrainian Canadians, “who, in turn, adapted it from the notion of ‘national autonomy’ that Jews had introduced to early 20th-century Ukraine, where Jews were conscious of securing rights as a minority group within a largely binational (Russian and Ukrainian) state,” writes Veidlinger, who is at the University of Michigan. “Ironically, when multiculturalism made it to Canada in its new form, it was met with skepticism and even outright rejection by the organized Canadian Jewish community.” Some of that rejection had to do with this vision of multiculturalism being “premised on a common Christianity,” he says. As well, the Jewish community had learned to navigate between the so-called “two founding races” (French and English powers) and there was concern that diffusion of power would make it harder to do so.

More than one writer touches on the French-English dichotomy, as well as where Indigenous peoples fit in those narratives. In his essay, Koffman considers the question, “What have Jewish-Indigenous peoples’ interactions looked like? How might we think about Jews’ home in Canada refracted through the prism of the interactions between the placed and the displaced?”

The only local contributor to No Better Home is Richard Menkis, a professor at the University of British Columbia. The way in which his essay on museums fits into the collection is encapsulated in the two questions he poses: “What kind of home would it be if the narrative of the Jewish community were not considered ‘Canadian’ and included in the national experiences depicted in state-sponsored exhibitions? And the corollary question is: How comfortable are Jews, in this home, telling their stories, including the stories of the marginalized (the poor) and the ostracized (the criminals)?”

Menkis looks at three exhibits on Canadian Jewry – Journey Into Our Heritage (1970s), A Coat of Many Colours (late 1980s) and narratives at the Canadian Museum of Immigration at Pier 21 in Halifax since it opened in 1999. He concludes that, in the two exhibits, as groundbreaking as they were, Canadian Jews were comfortable only in sharing their achievements and contributions (ie. worth) to Canadian society at large. These exhibits omitted people and activities that could be more controversial, such as Jews involved in the union movement or in radical politics.

At the Canadian Museum of Immigration, the historical summations eventually became more nuanced about Canada’s immigrant communities, and recognized them as having “enriched the cultural mosaic.” This is a grand improvement from the attitude in 1945 of the Historic Sites and Monuments Board of Canada when it was asked to recognize the country’s first synagogue. Menkis begins his essay with this point, citing a member of the board, who said “he was not particularly interested in the commemoration of Jewish activities.” The board member had a similarly dismissive response to the suggestion “that there be a commemorative marker for 400 African Canadians who lived on Vancouver Island before 1858,” notes Menkis.

Every contributor to No Better Home? offers a different perspective. One that seems sadly true is that of Jack Kugelmass of the University of Florida. “My point,” he writes, “is that good places for Jews have a lot to do with robust economies, with stable governments and a consensus in which difference is at least tolerated and immigrants welcomed because they’re good for business.” He recommends: “Enjoy the good times while they last. Nothing is forever. Right now is certainly Canada’s time, as it is for Canada’s Jews.”