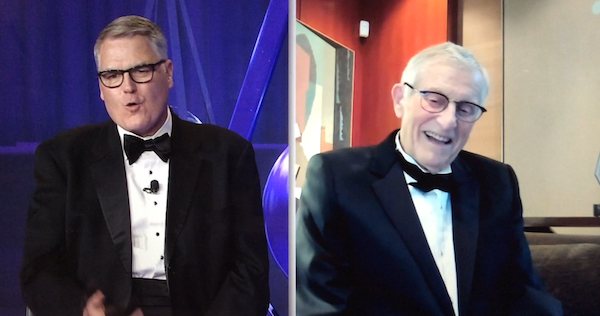 On May 20, Gordon Diamond – chair of West Coast Reduction Ltd. and Austeville Properties Ltd. – was among those inducted into the Business Laureates of British Columbia Hall of Fame. The ceremony, which was to have been held last year, took place virtually.

The Hall of Fame was created in 2005 by Junior Achievement British Columbia (JABC) to honour local “business leaders whose efforts have shaped our province and country.” It is housed in Vancouver Convention Centre West.

Also part of the festivities, in a belated celebration of the hall’s 15th anniversary, was the posthumous induction of 10 Pioneer Laureates. Morris Wosk, z”l, who was president of Liberty Investments Ltd. and M.J. Investment Co., as well as co-founder of Wosk’s Ltd., was so honoured for both his business and philanthropic endeavours. Wosk, who passed away in 2002, “played a significant role in the growth and development of Vancouver” and was a “revered mentor to the next generation of businesspeople.”

The gala included speeches by supporters and representatives of JABC and presentations by some young achievers. There were brief video biographies for each laureate being inducted, and the Hall of Famers spoke with moderator Greg D’Avignon, president and CEO of the Business Council of British Columbia. In that conversation, Diamond pointed to the importance in leadership of building “relationships, trust,” and of being “honourable with the people who work with you, not for you.”

One of the most satisfying aspects of his business at this point, he said, is the people who are running it. “We have family members, we have a team…. I’ll be listening to various meetings and I’m in the background but, if I wasn’t there, what the family and the team has built is that my company will continue without me.”

He said of this legacy, which includes the Diamond Foundation, in addition to the businesses, “You can’t buy that feeling that I have when I look at my plants, when I look at the buildings, and that we’re capable of doing things like this,” he said, referring to supporting JABC and “giving back” to community in general.

The JABC write-up highlights the foundation, which Diamond “set up with his late father, Jack Diamond, in 1984 as a vehicle for his philanthropic aspirations. Since inception, the Diamond Foundation, funded solely by Gordon and his companies, has made donations to hospitals, schools, the arts and other public and charitable causes.”