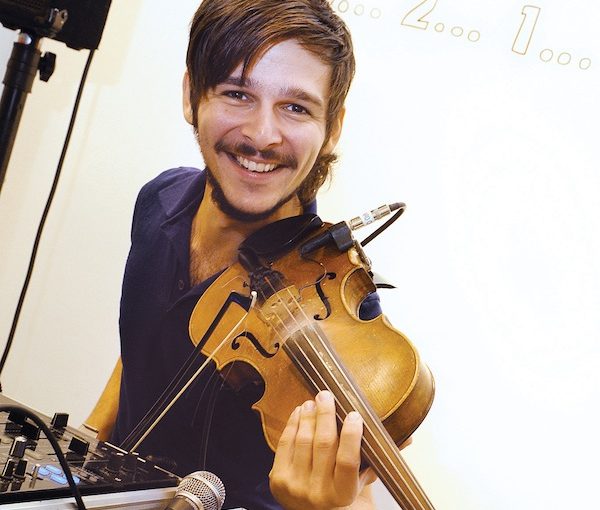 As a violinist, music producer and DJ, Michael Fraser’s musical talents traverse many realms. Yet, despite the proficiency and versatility he has to create his art, Fraser believes that “personal connection to music transcends skill.”

It is that personal musical connection that the 30-year-old, born-and-raised Vancouverite hopes to instil in the next generations – be they performers or devotees – in the group electronic music and DJ classes he is teaching at the Jewish Community Centre of Greater Vancouver through spring 2020.

The early stages of Fraser’s musical trajectory began in grade school as a Suzuki violin player, though numerous other styles – from classical to hip-hop – seeped into his sphere of artistic influences through various musical mentors. Among them was Vancouver-based saxophonist and flautist Tom Keenlyside, who had a tremendous impact and helped Fraser “connect with music in an abstract, rather than a theoretical, way.”

Marrying and starting a family with his partner Camille, though, has brought about a shift in Fraser’s musical focus in recent years. The sense of wonder possessed by children, and the simple way it is often expressed, led him to view things from a different perspective and to feel a sense of responsibility to teach.

Fraser began playing music for his son before his son was even born. When Isaac turned three, Fraser observed him connecting to the process of making music himself.

“After Isaac was born, I started to see that my purpose as a musician is to help young artists develop their innate creativity and coach artists to deeper levels of emotional intelligence,” said Fraser. “When my son asks to hear my music, I want to help him cultivate a relationship to music and life that goes beyond what words can express.”

Fraser’s professional musical career began in 2007, while in his late teens. Since then, he has collaborated with numerous recording artists, including the Ault Sisters, a Toronto-based vocal jazz trio; performed at the Shambhala Music Festival and the Montreal Jazz Festival, among many other venues; and opened for internationally known acts, such as Michael Bublé, Caravan Palace and Arrested Development.

His success as a live performer led him to working with Ben Affleck on the original score for Ben Affleck on the Meaning of Life, an animated short film about the actor and director’s Eastern Congo Initiative, which premièred at the 2012 Toronto International Film Festival. Fraser also appeared as a violin player in a scene of The Revenant, an Academy Award nominee for best picture in 2016 and for which Leonardo DiCaprio won the prize for best actor.

Currently, Fraser is devoting his expertise to artist development (on both the career and creative sides), as well as working with Black Octopus Sound, a company that produces samples and musical production tools.

On Oct. 29, he began facilitating his first DJ course at the JCCGV for youth aged 10-16, showing them the basics of how music is composed electronically, and the ins and outs of being a DJ. This session ran until Dec. 17.

He could feel how the group connected with the music, and foresaw many new up-and-coming DJs in the Vancouver Jewish community.

“When I am in the class with students, we are focused on how the beat feels. Are there styles of music that feel good? Knowing your tastes is going to differentiate yourself from other DJs,” Fraser explained. “I will sit with a class and play various drums and figure out which one speaks to a particular student. Having that distinction brings us closer to the music – which chords carry tension and which carry release in chord progression? What does that connection to music feel like? How is it one can play the same series of notes in different order and have a different outcome feeling?”

His students take what was done in class and make musical experiments when they get home. Fraser finds that, when they open up GarageBand or Caustic, two of the more popular DJing apps, they don’t feel as though they are doing homework.

Often, he noted, students have used DJing apps before. He also pointed out that, unlike kids from earlier times, kids today don’t differentiate between DJs and music creators. Those barriers are completely gone, he said.

The courses – $180 for JCCGV members and $225 for non-members – comprise 10 lessons, run Tuesday evenings and are open to kids 10-16. Students should bring a pen and paper, a mobile device (laptop, tablet, cellphone) and headphones. For more information, visit jccgv.com/performing-arts/school-of-music.