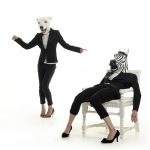 Ziyian Kwan and Vanessa Goodman perform together in Simile, which concludes the Scotiabank Dance Centre’s open house on Sept. 10. (photo by David Cooper)

The Scotiabank Dance Centre’s open house on Sept. 10 culminates with Simile, featuring new work and performances by Vanessa Goodman of Action at a Distance and Ziyian Kwan of dumb instrument Dance.

All three pieces in the show – Kwan’s Still Rhyming, Goodman’s Floating Upstream and the collaboration In Vertebrate Dreams – are connected yet unique, Goodman told the Independent.

“Ziyian’s piece, Still Rhyming, is a beautiful work that responds to Patti Smith’s book M Train, and the piece has an incredible live sound score by Jo Passed,” she said. “It is a whimsical journey for the audience and Ziyian captures and transports my imagination while I am watching the piece. For me, Floating Upstream explores the notion of having one’s head in the clouds in a very simple sense: it is the idea

of being a dreamer, where anything is both possible and impossible. And, in In Vertebrate Dreams, we are creating a surreal world where human and animal instincts are being explored and subverted.

According to its description, Floating Upstream “plays with the fantastic being mundane and the mundane being fantastical.” Goodman explores these elements “through simple actions and coordinations that I employ daily, like walking or speaking,” she said. “In the opening of the work, I deconstruct the act of walking and try to transform it to feel as if I am floating through the space. Or simple gestures that I do while I am talking – with these gestures, I have experimented and distorted how I can embody them until they are unrecognizable.

“Floating Upstream has an original sound composition by Vancouver-based artist Loscil,” she added. “Loscil and I have been collaborating on several works over the last year, including my solo Container that just toured to Seattle’s On the Boards’ Northwest New Works Festival and Portland’s Risk/Reward Festival. It is so great to be continuing our creative process together, as I find creating with his soundscapes so rich and driving.”

Goodman has also been working with Kwan for some time, “supporting one another and collaborating in a number of ways since 2013,” she said. “Simile is, in many ways, a culmination of our interest in each other’s work and friendship. It is always such a pleasure and honor to collaborate with colleagues in new ways, to see where you can grow and be challenged inside your artistic practice.

“The idea for the duet seeded for us when we were doing a photo shoot for the production and we got several props to work with to create some imagery to publicize the show,” she explained. “We started exploring these masks and all of sudden we decided that we were compelled to make this work. What has become clearer for me as this process has gone on is that the work is about how we both are different animals when it comes to creation but, in a strange and wonderful way, we also complement each other and have created something that is unique to us working with one another.”

Goodman expressed gratitude to the Dance Centre for Simile’s inclusion in the open house, saying that she and Kwan “are very excited to be sharing this program that we have been dreaming up for the last two years.”

The Sept. 10 open house starts at 11 a.m. with an hour class on pow wow, followed by a class on tap and then many other dance styles – including swing, Brazilian, Scottish, hip-hop, ballet – throughout the afternoon to 5 p.m., as well as a workshop on injury prevention. All classes are free and suitable for beginners.