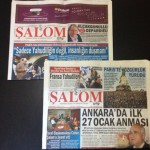 The Hon. Steven Blaney, Canada’s minister of public safety and emergency preparedness, on Jan. 22 delivered a statement addressing concerns of a worldwide rise in antisemitism. The speech was delivered at an informal meeting organized in New York by the United Nations General Assembly. Blaney addressed the assembly and delivered the statement to more than 50 UN member states, as well as special guests. His remarks were as follows:

“Elie Wiesel is a man who lived through the horror of the Holocaust. He has called it ‘Night.’ He has spent his life fighting antisemitism, repression and racism. He is a source of inspiration in assuming mankind’s duty to remember.

“For Canada, Israel has an absolute and non-negotiable right to exist as a Jewish state. Indeed, almost exactly one year ago, our Prime Minister [Stephen] Harper stood in the Knesset in Jerusalem to declare that, through fire and water, Canada would stand with the people of Israel in the face of antisemitism.

“Our Canadian government has adopted an unequivocal approach against groups that spread hatred of Jews, rewrite history, publicly deny historical facts and the scope of the extermination of Jews during the Holocaust [or] are in favor of terrorist acts committed against the state of Israel.

“Sadly, recent events demonstrate that hatred of Jews is in resurgence around the world. The antisemitic attack on a kosher supermarket in Paris occurred on the heels of the horrific jihadist terror attack on Charlie Hebdo journalists.

“On Jan. 10 of this year, I had the privilege of laying a floral tribute in Paris – in front of the Hyper Cacher market – in honor of the victims of those cowardly terrorist attacks.

“Those voices that are being assassinated today and those pens that are being broken through violence are attacks on our own freedom of expression, our own liberty, our democracy, our way of life and our reason for being.

“The world will not be destroyed by those who do evil, but by those who watch them without doing anything. That is why Canada is a leader in the fight against ISIL and is working with a broad coalition of allies to reduce the very real threat posed by that group and terrorists who attack us. As Canada’s Foreign Minister John Baird said during a recent trip to Israel, ‘the great struggle of our generation is terrorism.’

“This very week, we witnessed threats and acts of vandalism against Jewish religious institutions, particularly the Beth Israel synagogue in Alberta.

“In 2010, the prime minister spoke at the Ottawa Conference on Combating Antisemitism, clearly outlining the real threat of antisemitism and Canada’s duty to respond. He said: ‘We must speak clearly. Remembering the Holocaust is not merely an act of historical recognition. It must also be an understanding and an undertaking. An understanding that the same threats exist today, and an undertaking of a solemn responsibility to fight those threats.’

“It was then in Canada, along with 50 other nations, that the Ottawa Protocol on Combating Antisemitism was signed; a robust action plan to share ideas and exchange practices about the best ways to combat and eliminate antisemitism around the world.

“Canada has taken a zero-tolerance approach to antisemitism and all forms of discrimination, including in rhetoric towards Israel and attempts to delegitimize Israel, such as the boycott, divestment and sanctions movement. This is because we have seen time and again that those who threaten the existence of the Jewish people are a grave threat to us all.

“More work needs to be done to combat the scourge of discrimination inherent to antisemitism and, under Prime Minister Harper’s leadership, Canada will continue to be a leader in those efforts.

“As I clearly stated to Jews with whom I met this year in Montreal, Paris or Jerusalem, Canada is your friend and your ally. You can count on our friendship and our untiring support.”