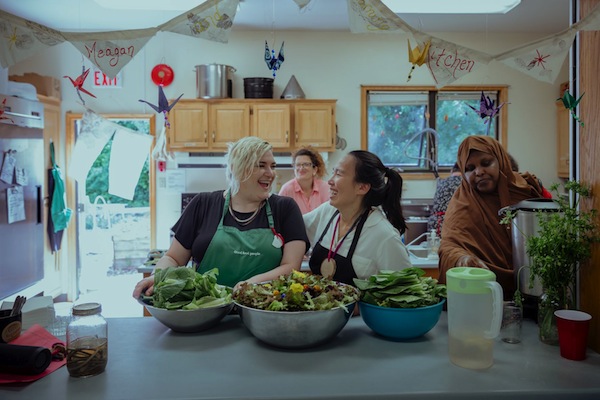 Mazon Canada, a grassroots community foundation that helps feed Canadians of all ages, abilities, beliefs and ethnicities on behalf of the Jewish community, is making some big shifts entering the new year, as households across the country face mounting challenges involving food security. In addition to providing grants for food and equipment, and educating and advocating toward an end to hunger in Canada, Mazon says it will also be “harnessing the wisdom and power of communities.”

“We’re deepening relationships with our grantees, asking about how we can support them better, and making big changes based on that feedback,” said Izzy Waxman, Mazon’s executive director. “We realized we can have bigger impacts if we lift the restriction that our grants should only be spent on food.”

As an example, Waxman compared investing $2,000 on food with spending the same amount on a freezer. “The former will get you 2,000 meals at even our most efficient food bank partner, but spending $2,000 on a freezer to store rescued or donated food can rescue 1,000 pounds of food a month for at least 10 years. That’s 12,000 meals annually or 120,000 meals. This is something we might not have explored if we didn’t take time to listen to our partners and ask how we can support them better, treating them as the experts that we can learn from.”

Additionally, according to Waxman, Mazon is bringing a social justice perspective to hunger, which recognizes that more vulnerable groups need greater attention. By supporting and prioritizing marginalized communities, Mazon hopes to strengthen interfaith and intercultural alliances.

Further, Mazon is taking an active role in advocacy work. “While providing food is always our biggest expense by far, we can’t solve hunger by only treating the symptom. We have to address the root cause as well: poverty. That means starting a conversation in the Jewish community about addressing the cost of living, employment and our social safety net – including the housing crisis, disability supports, minimum wage and other issues affecting the poorest people in our communities,” Waxman said.

Helping low-income individuals in British Columbia since its founding in 1986, Mazon currently supports more than 25 organizations across the province, including hot meals for the homeless in the Downtown Eastside, community gardens at Indigenous elementary schools, hampers for Jewish seniors, food rescue operations to save edible food from landfills, and drop-in meals for people with AIDS and those experiencing addictions.

In 2021, Mazon, on behalf of the Jewish community, provided more than 300,000 meals through 205 partner programs in 92 Canadian towns and cities. Its reach extends from Victoria to Iqaluit to St. John’s.

A successful partnership program Mazon points to regionally is School District 50 (SD50), consisting of six schools on Haida Gwaii. As an archipelago, Haida Gwaii is especially vulnerable to disruptions in food supplies and the economy; because food must be shipped in from the mainland, basic nutritional staples can be very expensive.

To keep students fed, SD50 has used a strategy, called Local Foods 2 School, in which cafeteria food is sourced from nearby farms or local woods and waterfronts. Students visit the sources of the food to learn about how it is grown, gathered, hunted, preserved and prepared. Meals served at the schools are often cooked by students so they learn kitchen skills.

Believing it is important to have Jews from all over Canada who have on-the-ground knowledge of their communities and cities, Mazon is hoping to fill two vacant board positions with residents of British Columbia.

“That same grassroots ‘community-knows-best’ perspective we take to supporting frontline food programs matters in our leadership, too,” Waxman said. “We’re about to head into strategic planning and we need participation from Jews across the country to make sure it’s in touch with local priorities.

Besides seeking a B.C. presence on its board, Mazon is looking for people to serve on its advocacy, fundraising, allocation and education committees.

In 2019, there were 4.4 million Canadians confronting food insecurity, according to Mazon. In 2021, the number jumped to 5.8 million and, by the end of 2022, it is expected to be even higher as a result of inflation. Inflation also makes it more difficult for food banks to serve people in need.

Mazon is distributing 100% of donations to its current Rosh Hashanah campaign to frontline food projects without overhead.