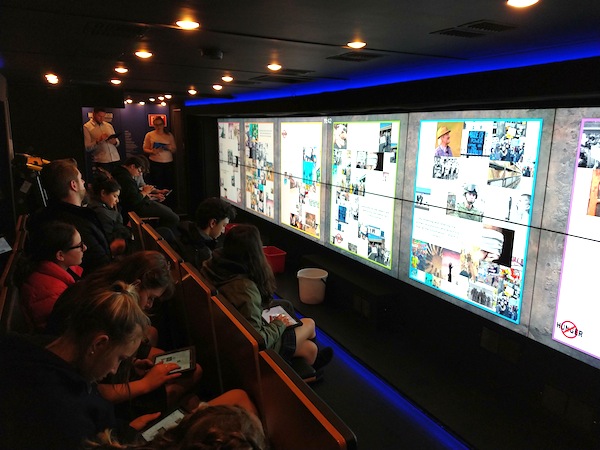 A project of the Canada-Ukraine Foundation, the national educational tour about the Holodomor began in 2015 and has reached about 30,000 Canadian high school students so far. (photo by Pat Johnson)

What constitutes a genocide? How many Ukrainians were murdered by Josef Stalin’s human-created famine in the 1930s? Would you stand up in a situation where lives were at risk – even if it meant you might become targeted?

These were some of the questions confronted by Grade 12 students of King David High School last week. A national educational tour about the Holodomor – the mass murder of Ukrainians by the Soviet regime – pulled into Vancouver, opening the eyes of young people to this chapter of history.

Beginning in 1932, the Soviet government under Stalin began a calculated, systematic famine in Ukraine, seizing all food sources, cutting off escapes for people fleeing starvation and implementing summary execution for the crime of stealing the smallest piece of sustenance. Farming was collectivized, creating catastrophic conditions. Political and intellectual elites were murdered.

Some details, including the number of Ukrainians killed, remain cloaked in uncertainty because, from the start, the Holodomor was deliberately hidden from the outside world through a comprehensive system of censorship and misinformation, as well as the complicity of media and other countries. Estimates of the number of dead range from seven million to 14 million.

Holodomor is a portmanteau made up of holod, starvation, and mor, death, meaning “death by starvation.”

The Holodomor National Awareness Tour consists of a bus-sized repurposed former recreational vehicle. Rather than a static exhibition through which participants walk, the vehicle has been retrofitted with a 30-foot screen down one interior wall and 30 theatre-style seats down the other, with interactive tablets that invite students to study and discuss in small groups before reconvening to share what they’ve learned with the larger group. A project of the Canada-Ukraine Foundation, the tour began in 2015 and has reached about 30,000 Canadian high school students so far.

The Holodomor was not an endeavour to kill an enemy, but an effort to restructure society, a form of social engineering at its most extreme. In September 1932, Stalin wrote to one of his lieutenants that Ukraine was restive. The Soviets perceived Ukrainians as being profoundly religious, individualistic, believers in private property and attached to their plots of land, making them unsuitable for building communism. Addressing these perceived flaws would require, according to Soviet leaders, an action so extreme that a word had not yet been invented to describe the intent.

The entire agricultural sector was upended by collectivization and resisters were murdered or sent to gulags, Soviet concentration camps. At first, remaining supplies of food sustained the Ukrainian people, but those reserves were soon depleted, while the Soviets extracted ever-increasing quotas of grain and Soviet wheat exports to the West grew. As the Holodomor proceeded, NKVD secret police were sent to search for and confiscate any remaining food sources. While those caught stealing or concealing food were executed, for millions more, fate was less sudden.

“Most of the victims died slowly, at home,” according to the narrator of one of the interactive films viewed by students. “Special NKVD units raided people’s homes to collect the dead bodies. They received 200 grams of bread for every dead body they delivered.”

Students examined the forces that allowed the Soviet Union to hide the reality from the world. For the Soviets’ part, there was censorship and the threat of retaliation for those who shared the truth. But their crimes were abetted by Western figures, including New York Times correspondent Walter Durante, who won a Pulitzer Prize for his reporting from the USSR, even as he misrepresented the Holodomor. In one article, titled “Hungry, not starving,” Durante wrote that there is no actual starvation or death from starvation, though he acknowledged there was widespread mortality from diseases due to malnutrition.

Leading journalism figures from the time are brought to life through reenactments. British journalist Malcolm Muggeridge, reporting for the Manchester Guardian, reflected on being raised in a socialist household and how he was enthusiastic about traveling to the Soviet Union to report on the utopia being created there. When he saw the reality, he evaded Soviet censors by sending his dispatches home via the British embassy’s consular pouch.

One of the heroic figures of the story is Gareth Jones, a Welsh journalist who risked his life to bring the truth from Ukraine. He convened a press conference in Berlin, on March 29, 1933. But the timing was terrible. The Soviets were about to launch a show trial against six U.K. citizens, accusing them of espionage in what would become known as the Metro-Vickers Affair.

In order to remain in the USSR and report on what promised to be a trial of global importance, journalists had to stay on good terms with the authorities.

“It would have been professional suicide to make an issue of the famine then,” one reenactor remarked. “So, none of us supported Jones.”

Lauren Shore is a student in King David’s Holocaust and Genocide Studies 12 course. The class, created by teacher Anna-Mae Wiesenthal, is delivered during lunch hour and, while students receive credit, they take the course in addition to their full complement of other classes. A province-wide genocide studies elective course is part of the new B.C. curriculum and will be offered next year at schools that opt-in.

Shore, with a partner, did a project on the Holodomor.

“Since there is a lot of debate on whether it’s a genocide or not, and how it was planned, we decided to focus on that,” she said. “We were focusing on the different steps of genocide [and] people were debating whether it was a genocide or not, since it wasn’t necessarily planned as exactly as other genocides were. As we looked into it, we found that it was planned just as much as the other genocides, just in other, more subtle ways.”

Solly Khalifa, also in Grade 12, was impressed with the interactivity of the Holodomor tour.

“I was astonished at how innovative it is,” he said. “They really get everybody participating and it’s very interesting and an easy way to participate also.”

Classmate Noah McNamara saw parallels between the Holodomor and the Holocaust.

“All genocides are kind of similar, in that it’s a governing body that takes advantage of their power to push a goal,” he said. “In the Holocaust, [it was] the Aryan race that they wanted to push. In this case, it was communism that they wanted to push. I think it’s important for us now to be aware of aggressive governments and governments that are trying to radically push things, because that’s definitely a precursor to genocide.”

Ava Katz, who worked with Shore on their Holodomor project this year, noted that studies of the Holocaust enforce the dictum “never again.”

“But I feel like sometimes that’s overlooked with other genocides,” she said. “Not a lot of people will say that. But when you really study other genocides in-depth and see how severe they are, it’s important that we never let any of them happen again.”

The cross-country tour operates with a shoestring staff. Alexi Marchel leads students though the experience. Kevin Viaene drives the bus and supports the program.