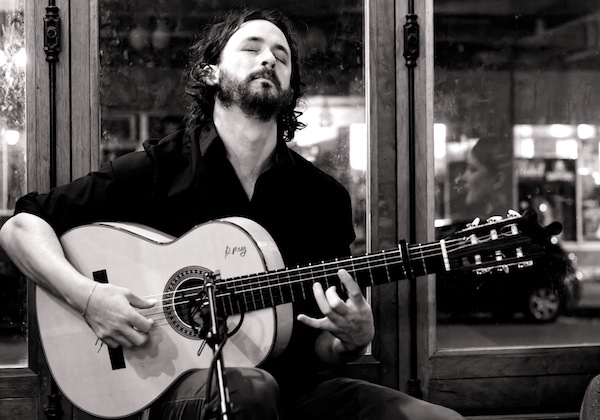 Garf performs at the Waterfront Theatre Sept. 23, as part of Kara Miranda’s company. Sombras/Shadows is a live music and dance presentation with projections reflecting personal experience both visually and thematically. Shadows are explored as interplay between light and dark, through the lens of Swiss psychiatrist Carl Jung’s theories of the Shadow Self. A parallel search is for intangible shadows of the past, Miranda’s ancestral roots, living in the shadow of the flamenco greats that came before and the masters that reign today and finally accepting and actualizing her shadow side.

Garf also teaches a master class at the Scotiabank Dance Centre Sept. 24, with Alvaro Echanove, called Theory and Practice: Exploring the Skills of Improvisation, Dynamics and Active Listening through Palmas. Palmas is a style of handclapping that accompanies flamenco dance.

Other master classes take place Sept. 17 and 18, with Mucha Muchacha, and on Sept. 24, with Albert Hernandez. Other ticketed shows include Mucha Muchacha at the Rothstein Theatre Sept. 16. Their eponymous show started as theoretical and practical research about women artists from the “Generation of the 27th,” known as Las Sinsombrero, and evolved into a contemporary dance project focused on the ideas of empowerment, determination, voice, participation, freedom and cooperation. The performance is developed from force-driven movement, effort, celebration and physical exhaustion. They put “at risk” traditional Spanish dance’s corporeality in a confrontation with contemporary dancing.

The two other shows at the Waterfront Theatre are Anastassiia Alexander on Sept. 22, performing The Machination of Memories Suppressed, based on the poem “Maquina de Olvido,” which Alexander wrote, and the performance contains elements of spoken word with dance; and Flamenco Rosario on Sept. 24, with Nuevo III, a collection of new choreographies by Ballet Nacional de España choreographer Albert Hernandez, Granada’s Sara Jimenez and Rosario Ancer.

On the afternoons of Sept. 3 and 4, free performances take place on the Picnic Pavilion stage at Granville Island. The Saturday features Mozaico Flamenco, A.J. Simmons and company, Bonnie Stewart, Jhoely Triana, and Michelle Harding and Calle Verde. Performers on the Sunday are Mozaico Flamenco, Kara Wiebe, Harding and Verde, Linda Hayes, and Stewart. There is also a free 20-minute workshop on Sept. 4 for children at noon, and a 30-minute one for adults at 12:20 p.m. 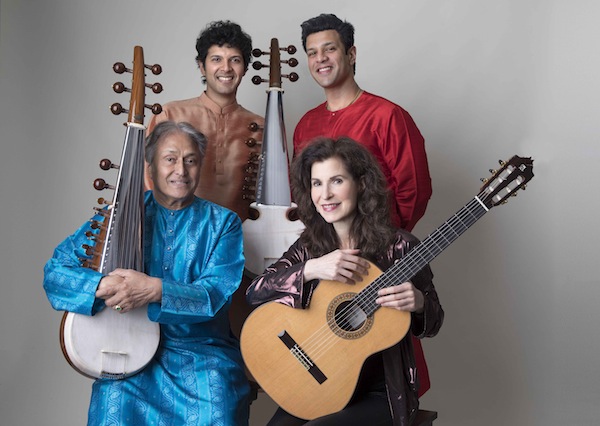 On July 12, Strings for Peace will have its world première at the Indian Summer Festival, which is described as “a multi-disciplinary arts festival ‘where worlds meet’ in Vancouver.”

Produced by the Indian Summer Arts Society, the festival’s mission “is to offer daring, multi-arts events that bring together diverse artists, audiences and artists in a spirit of global dialogue and citizenship.” Sharing a similar spirit, it is fitting that Strings for Peace – created and performed by sarod masters Amjad Ali Khan and his sons Ayaan and Amaan Ali Bangash, and guitarist Sharon Isbin – will be unveiled at the festival.

“The legendary sarod master Amjad Ali Khan emailed me 10 years ago to invite me to a concert of his in New York and to explore the idea of a collaboration,” said Isbin, a three-time Grammy Award winner whose repertoire includes Baroque, Spanish-Latin music and jazz fusion. “I had long admired Indian classical music, and was bowled over to hear his performances with his sons…. A warm friendship developed and, six years ago, he conceived the idea of composing ragas for us all to perform together. I received the music last December and loved it. They said that’s good because we have already booked a tour with you in India in February 2019! I had little time with my schedule, but was motivated because the music was exquisitely beautiful, as is their artistry. It was a magnificent experience to perform together in Kolkata, Mumbai and Delhi. I cherish our friendship and the opportunity this has given me to explore an inspiring new genre and collaboration.”

The four performers have made a recording for release in 2020, said Isbin, “and I am excited that Strings for Peace will be touring in the U.S. during summer and fall 2020.”

In an article earlier this year in the Hindustan Times, Isbin speaks about the difference between the Indian classical, mainly oral, tradition and the written Western classical music tradition. “Indian classical music has long pieces. You are taken on a journey,” she notes. “It is a very expansive state of consciousness, whereas a Bach or a Beethoven piece has a clear and defined sense of enclosure.”

“Performing together in India last February,” she told the Independent, “I was amazed to hear similarities between improvised embellishments in Indian classical music and melismatic nuances in Spanish, flamenco and Sephardic music.”

“When I was 9, my family moved to Italy for my father’s sabbatical year as a scientist and professor of chemical engineering,” she said of her beginnings as an artist. “My older brother Ira asked for guitar lessons, hoping to be the next Elvis. My parents found a great teacher who had studied with [Andrés] Segovia, but when my brother learned it was classical, he bowed out and I volunteered to take his place. I loved that an instrument was built for me, and that you held and caressed it to make music.”

Of the role, if any, Judaism or Jewish culture plays in her life, Isbin said, “My grandparents came to the U.S. as refugees from Russia and Poland to escape deadly pogroms, and I have many relatives who live in Israel. I have always felt a cultural connection to Judaism and to Israel. In fact, I was a teenager when the first work ever composed for me was a concerto by the late Israeli composer Ami Maayani, which I premièred with the Jerusalem Symphony and the Minnesota Orchestra. Since then, I’ve premièred more than 80 works written and arranged for me.”

Her experience with the Khans highlights how she views music’s potential to bring together different cultures. “There is only one human race, and we all need to appreciate and celebrate that commonality,” she said. “Music, because it transcends language, can be wonderfully uniting.”

Strings for Peace premières July 12, 8 p.m., at the Chan Centre for the Performing Arts. For tickets and the full schedule of the Indian Summer Festival, which opened July 4 and runs to July 14, visit indiansummerfest.ca.