When you are approved for a mortgage, your lender will typically offer you mortgage insurance. That may seem convenient, but before you say yes to mortgage insurance, you should know that you have other options.

Term insurance is an option that is rarely offered by a lender, but it can do far better in most circumstances. Protecting your mortgage with an individually owned term insurance plan offers better value and more flexibility.

In addition to the factors mentioned above, it’s also important to highlight that mortgage insurance coverage ends when your home is paid off. A personal life insurance policy is unaffected by your mortgage being paid off and can keep providing you and your family with protection in the years that follow.

In the same way that you decided to use an independent mortgage broker to help secure your customized home financing solution, it’s ideal that you work with a financial advisor to help you find a suitable insurance solution to protect your family. An independent insurance broker can work with you to find the coverage that works for you.

Also, keep in mind that it’s important to consider critical illness insurance in case you become seriously ill or injured and unable to pay your mortgage and other expenses. If you are an employee, your employers may offer critical illness as a benefit for you, but be sure the coverage is sufficient for your needs.

Because everyone’s circumstances are unique, it is important to review your particular needs with a qualified associate.

Philip Levinson and Brent Davis are associates with ZLC Financial. 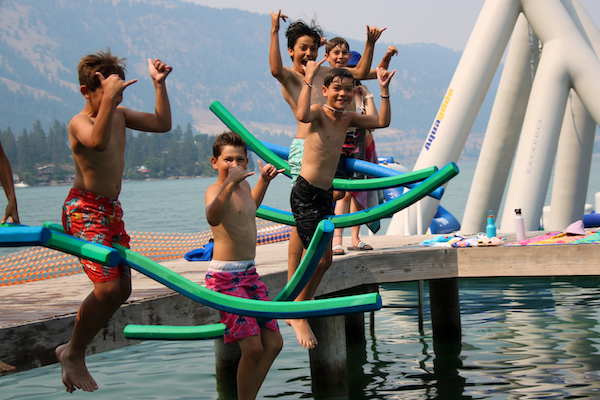 Camp Hatikvah donors are not only helping ensure the quality of the camp but its inclusivity. (photo from Camp Hatikvah)

Camp Hatikvah is well known for its program offerings, as well as its facilities and its spectacular natural setting in the Okanagan Valley. What many people may not know, however, is that the camp is only the place that it is because of community backing. Camper fees cover things like counseling staff, food, insurance and site maintenance. Everything else – including every building and almost every piece of equipment – has been donated by supporters who want to ensure that Camp Hatikvah can continuously improve without passing on the cost of doing so to the young families whose children attend.

Camp Hatikvah was established in 1937. Its donor base understands the unparalleled value and impact of a Jewish camping experience. They know that today’s campers are tomorrow’s Jewish leaders and that a donation is not a gift to just the organization but an investment in the future of the Jewish community.

More than 20% of campers attend Hatikvah’s program with the help of financial assistance and it is estimated that another 25% are on the cusp of needing to do so as well. Donors appreciate that many camp families are struggling with the affordability of Jewish life in Metro Vancouver and want to help control fee increases without the camp having to compromise program growth or site improvements. By funding program enhancements, equipment upgrades or capital improvements, donors are not only helping ensure the quality of the camp but its inclusivity. While summer camps are expensive – and Camp Hatikvah is no exception – it is because of donors that, on a per-day basis, Camp Hatikvah is one of the least expensive Jewish camps in North America.

Donors have also played an instrumental role in getting Camp Hatikvah through the pandemic. Not able to operate in 2020, the camp was facing a financial crisis. Similarly, in 2021, while the camp was allowed to open, it had to dramatically reduce its capacity in order to manage the COVID protocols. The financial toll of both these summers had the potential to financially devastate the organization for years to come. Yet, as they always have, donors stepped in and stepped up immediately – they covered all the financial losses the camp was facing. The level of generosity and support not only got the camp through the financial challenges caused by the pandemic, but also gave the camp a renewed sense of purpose, determination and passion for serving the community.

The board and staff of Camp Hatikvah thank each and every donor who has played a role in helping the camp become – and remain – one of the best Jewish camps. To learn more about the camp’s programs and the donors who make them possible, visit camphatikvah.com.