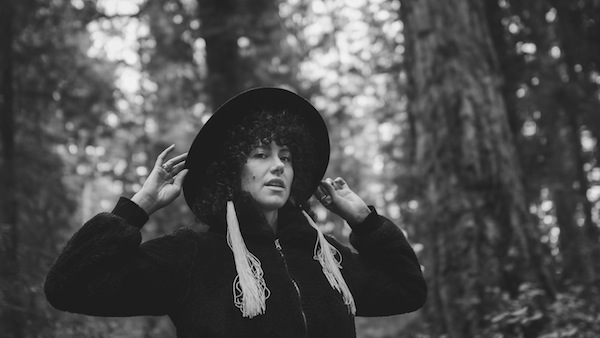 Dee has been offering the group singing classes over the past two years. “This has been one of my favourite projects I have ever created and it has inspired me to write a whole new album and live performance,” Dee told the Independent. “Sometime in 2020, I will release this new project with a new name and it is very different from anything I have performed. It will be a live, multi-sensory experience that is meant for listening rooms and theatres, or parks. And I will activate the spaces with my singing workshop prior to the show and then include the participants in my live performance. I won’t share the name yet, but it does include my family’s name in it.”

Dee’s cultural heritage includes Jewish and Italian roots, and jazz on both sides of the family. Her paternal grandparents are Evelyn Stieglitz (z’l) and Murray Landsberg, who she described as “the sweetest Jewish couple, who met in the Bronx in the 1930s. They were 13 and 15 and they were together until my grandmother past away a couple years ago. My father, Paul Landsberg, is a prolific jazz guitarist, who started his career teaching at Berklee College of Music in Boston, Mass. My mother, Rita Marie, was born to Rita Shirley Dallesandro and Jim Smith. Rita Shirley’s brothers, Frankie and Arthur, started a jazz big band in the ’50s called the Dellasandro’s, where they played saxophone and clarinet.”

Born Erica Dee Landsberg in Boston, Mass., Dee goes by only her first and middles names. She grew up “in the mountains of the Sinixt Territory (Nelson, B.C.). My mother, father, sister and I moved to the Kootenays in 1989 because my father helped start Selkirk College’s music program.”

Expressing her gratitude at being a Canadian citizen, Dee said she first moved to Vancouver in 2005, a couple months after graduating high school. “I followed my passion,” she said, “as I had already been performing and writing and I was ready to move to the big city to expand my artistry. I also followed my heart here, after falling deeply in love with a female DJ and producer who was running Vancouver’s only lesbian bar at the time.”

Dee is a vocalist, DJ, writer and producer. She released her first recording, Golden Mixtape, a combination of remixes and original work, in 2011. Her debut album, New Skies, came out in 2016.

“I am firstly a singer,” she said, “which means I get to connect to my instrument (aka my body) in such a deep and intimate way. I usually have some burst of inspiration come to me, whether it’s a hook, or a bass line, or a drum beat. Then I spend time developing the tone, feeling and resonance. Words usually come after, as I find when I add words to my art, it brings it into the mind and I like to stay in the body for as long as possible.

“As far as production goes, I have been producing music for over 10 years and have yet to release something that is completely self-produced. I use production as another way to get my ideas out, using drum pads, keys and programs like Logic and Ableton, and then eventually collaborate with other musicians and producers to complete the creation.

“Recently,” she added, “I have been creating on a loop pedal, which has taken my artistry to a completely new level. I started DJing when I was 20, when I realized that I could be my own band mate, and started touring a performance where I would sing and MC over top of my DJ sets, fusing together the music that I love and moves me with my originals and remixes.”

Dee collaborates a lot, both in performances and in the creation of new work. Her bio notes that she has “supported and toured with artists such as Lil’ Kim, Mos Def, Quest Love, A Tribe Called Red and Bad Bad Not Good.” Past guest artists have included Snotty Nose Rez Kids and Desiree Dawson.

“I love the magic that happens when artists share space together,” she explained. “Each person is unique, with their own experience, tone, voice, stories and inspirations. It activates every part of my soul to witness artists coming together in this way, harmonizing, improvising, and the dynamics of different voices coming in and out of the music. I always say, sometimes just having another person in the room is enough, without a word shared. I can feel every piece of music they have absorbed since their creation lighting up the space. It is truly is my favourite part about being an artist.”

For the Vines Art Festival show, Dee said, “I have brought together a group of such powerful artists…. Each of these artists shares their stories and truth in such a real and accessible way.”

Dee said she is honoured to be part of the festival, as she really connects to its core values. Part of the festival’s mission is to offer “platforms for local artists and performers to create with and on the land, steering their creative impulses toward work that focuses on the environment – whether a deep love of nature, sustainability, or climate justice.”

“Growing up, I spent a lot of time outside and I find a lot of my inspiration in nature,” said Dee. “I attended Waldorf School as a kid, where I learned how to use my hands to connect and create with the natural world in a sustainable way.

“Since then, I have always had a very strong connection and appreciation for the land I occupy. Wherever I travel, I always take the time to educate myself on whose land I am on and acknowledge that within my show. I use my platform to share information about the social and environmental issues that I feel are important – I actually got fired from a festival in Calgary for speaking about the pipeline and how much harm it will cause to indigenous communities.”

For the performance at Vines, Dee shared that there is going to be “an extra special element.”

Of that element, she said, “I have never done this before and I am so excited. During the first time I sat down with Heather [Lamoureux, the festival’s artistic director], I had a vision and I am really looking forward to bringing it to life!”

Weaving Voices on Aug. 9 takes place at CRAB Park at Portside, at 7 p.m. Other Jewish performers in the festival include mia susan amir, Ariel Martz-Oberlander and Rabbit Richards, and it features more than 80 artists overall, performing at parks throughout the city. Every event is free admission and more information can be found at vinesartfestival.com.