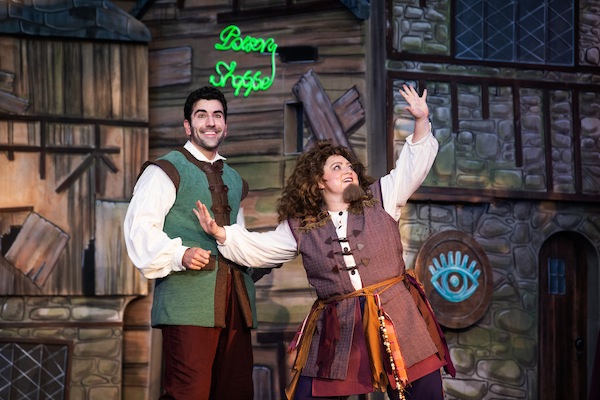 Much of the humour in Something Rotten! comes from Nostradamus (Jyla Robinson), right, leading Nick (Kamyar Pazandeh) astray with incorrect visions of the future. (photo by Emily Cooper)

Theatre Under the Stars is a fun, relaxing way to ease yourself back into theatre after the COVID hiatus. Its two productions, Something Rotten! and We Will Rock You, are happy fare that alternate nights through Aug. 27, outdoors at Stanley Park’s Malkin Bowl.

The Independent saw Something Rotten! on opening night, hoping to see Jewish community member Daniel Cardoso, who plays Jewish moneylender Shylock in the TUTS productions. However, it was understudy Simon Abraham who took on the role of the moneylender that night. He and the entire cast put on a great show.

In this comedy, set in 1595, Shakespeare is monopolizing the theatre industry and playwright siblings Nick and Nigel Bottom are trying to write a hit. They face several challenges, including being in debt to Shylock, who is willing to forgive that debt if they permit him to produce their new production. However, they initially refuse because he and they could be put to death, as Jews at the time were permitted few professions, one of which was moneylender.

Something Rotten! takes on – in very light manner – antisemitism, the treatment of the poor and the place of women in Shakespeare’s time. It also takes on these issues as they are depicted in Shakespeare’s plays and poetry.

“Shylock has been a very interesting character to explore and I extremely grateful to our director, Rachel Peake, for giving me the chance to do so,” Cardoso told the Independent in an interview before the show opened. “In researching for this part, I certainly took a cursory look at Merchant of Venice, but only so I could have an idea of who Shakespeare’s Shylock is. Because of how much Something Rotten! subverts the audience’s expectations of these well-known Shakespearean characters, there are only a few similarities between what I’m doing and what we see in Merchant of Venice. I don’t think that antisemitism is a central theme of this show, but we certainly get a view of it through Shylock.

“I also dove into what antisemitism looked like during the time of the Renaissance,” he continued, noting that Jews were “expelled from England in the late 13th century and only officially allowed to return in the mid-17th. However, it does appear that there were indeed Jewish people living in England during Shakespeare’s time and that some even fled to England from Spain and Portugal, due to the Inquisition.”

Cardoso sees parallels between Shakespeare’s time and today’s undocumented immigrants in both Canada and the United States and the refugee crises around the world. “In trying to find a way into the Shylock ofSomething Rotten!,” he said, “I found myself drawing on these modern-day examples, as well as trying to imagine what it must have been like for Jewish people in the time of the Renaissance or various other points in history. I found that, given my own connection to the community, this hit quite close to home for me. At the end of the day, he’s a smart guy who works hard and, despite the obstacles in front of him, he is able to be an equal and a friend to many of the characters in the show.”

Not such a smart guy is Nick Bottom (Kamyar Pazandeh) who, in trying to skip the hard work and best Shakespeare (Daniel Curalli), seeks out a soothsayer, Nostradamus (Jyla Robinson), who tells him that musicals are the popular theatre of the future. Nick sinks the last pennies he and his wife Bea (Katie-Rose Connors) have into a musical production with a reluctant Nigel (Vicente Sandoval), who has Shakespeare’s talent but lives in his brother’s shadow. It is only after Nigel meets Portia (Cassandra Consiglio), the daughter of Puritans, that he becomes to his own self true.

The homage to and satire of both musicals and Shakespeare makes for a lot of laughs and reference guessing – is that line or musical snippet from Annie, Evita, Rent, A Chorus Line, or more than a dozen other shows? Standout songs are “God, I Hate Shakespeare,” with the Bottom brothers’ differing views of their main competitor; “The Black Death,” a cheery ditty about the plague, the Bottoms’ first musical attempt; “Will Power,” Shakespeare enjoying his rockstar status, amid fawning, crying, screaming, fainting fans; and “Make an Omelette,” the title song of the Bottoms’ new musical. Foreseeing Omelette instead of Hamlet as Shakespeare’s best-ever play is only one of the soothsayer’s many slightly incorrect visions.

“It’s been a privilege to get to work on Something Rotten!” said Cardoso, who has been in four other TUTS productions. “It’s an extremely funny show and, if you’re a fan of either musical theatre or Shakespeare, then you’ll have a fun time at this show. And, if you like both, even better!”

For tickets to either of this season’s productions, visit tuts.ca. 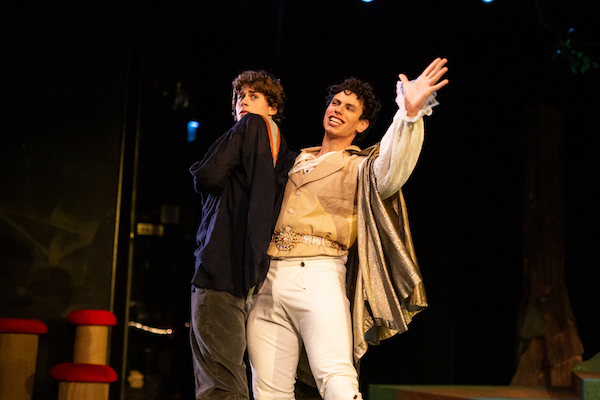