If you’re coming for the natural splendours of Costa Rica, you won’t leave disappointed. (photos by Lauren Kramer)

This travel story comes with a caution: if you’re visiting Costa Rica for any reason other than its nature, don’t bother.

Don’t come for the food, which is easily forgettable. The most popular dishes are gallo pinto, which is rice and beans, and fried pork skins known as chicharrones. While local Costa Ricans love this food, if you’re not from here, you might well be mystified by its appeal.

Don’t come for the driving conditions either, as the winding back roads leading to the coastlines and volcanic regions inland can be perilous, with bathtub-sized potholes and no streetlights out of the city. 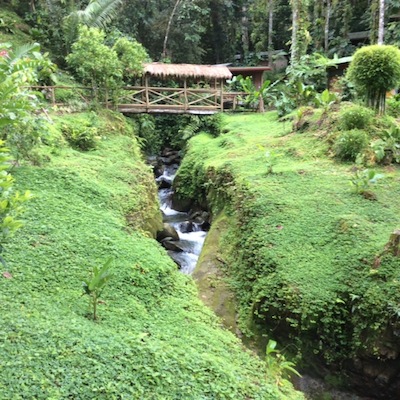 But, if you’re coming for the natural splendours of this small Central American country, you won’t leave disappointed. A tropical jungle filled with lush palms, massive ferns, strangler fig trees and unexpected bursts of bright heliconia, it’s a scene straight out of a Tarzan movie, complete with howler monkeys swinging shyly from the drooping vines and sloths cradled sleepily in tree branches. A quarter of the country’s landmass is protected from development, and its verdant beauty is nothing short of spellbinding.

We were grateful to leave the dense bustle of San Jose, Costa Rica’s capital and a city unremarkable but for a handful of colonial-style architectural buildings easily seen from a bus on the way out of town. Our destination was the Pacuare River, two hours east, where we’d signed up for a whitewater river rafting adventure, one of the hallmark tourism experiences in Costa Rica. Over the course of two days, we’d travel 18 miles over Class 3 and 4 rapids, spending a night at an eco-lodge, where we’d be hushed to sleep by the thrum of rushing water.

The rafting was thrilling, with adrenaline-pumping rapids around every bend and, between them, a few serene, calmer stretches where we could hop overboard. With one hand on the raft, we’d drift gently in the soft current, watching the iridescent turquoise wings of blue morpho butterflies as they flitted across the river. By early afternoon, we reached the eco-lodge, a series of rustic treehouse-style rooms located on the river bluffs. Once we’d swapped wet clothes for dry, there were hikes we could venture on, but it was prudent to exercise caution, our guide Jonny warned us. “There are snakes around here and they get active this time of day,” he said. “Just a few days ago, I killed a very poisonous one outside the dining hall.” 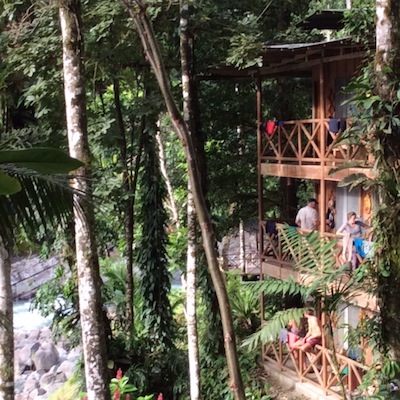 As evening fell, we gathered at candlelit tables in the thatched dining hall for dinner with other travelers. The air was thick with moisture, the jungle was shrouded in misty clouds and a steady rain made the palm fronds glisten in the fading light. It felt magical spending a night on the riverbanks, surrounded by tropical jungle and just a two-hour hike from the Cabecar Indians, the closest isolated indigenous community. “We have an arrangement with them,” Jonny explained. “They allow us to stop along the river and prepare meals for our rafting guests, but if there’s any food left over, we leave it for them.”

I wanted to spend Shabbat in San Jose, which is why we headed back there on the dusty Costa Rican roads a few days later. We’d been invited to spend the night at the Hotel Presidente, an establishment owned by the Mikowski family, third-generation Jewish Costa Ricans.

“My great-grandfather left Poland in the 1930s and somehow ended up in Costa Rica, where he sold clothing door-to-door,” said Daniel Mikowski. Daniel’s late father, Jaime, was the architect behind Hotel Presidente’s expansion and, before his death in 1998, he designed another hotel three hours northeast. Tabacon, located on the slopes of the Arenal Volcano, started as a 30-room establishment with beautiful gardens and hot springs fed by the diversion of thermal water to the property. Today, the five-star, 100-room property is in high demand and known to be the best accommodation in the area.

As dusk approached, we made our way to the Centro Israelita Sionista de Costa Rica, a massive complex whose high security walls include administrative offices for various Jewish agencies, the Jewish museum and an impressively grand Orthodox Ashkenazi synagogue. I’d sent my passport and filled out a questionnaire months prior to arriving for Friday night services, but security was tight, passports were inspected and I was still questioned by an Israeli guard before being waved through. Later, at the Shabbat table of the gracious local Jewish family I’d been invited to join, I asked if there was any hostility towards Jews that might justify such high security. The adults at the table shrugged. They couldn’t remember any instances of antisemitism in Costa Rica, a democratic country that prides itself on its high literacy rate, its emphasis on conservation (25% of the land is protected and 11% is national parkland) and the fact that it has no army.

I’m used to daydreaming through rabbinical sermons and this time I had the perfect excuse: it was delivered in Spanish, so the possibility of comprehension was nonexistent. Still, I loved the familiarity of the Shabbat songs that washed over me during the service, and the warmth of community members who were happy to welcome visitors. After a week of barely mediocre restaurant meals, it was blissful to eat challah at a local table, where the menu included kosher tamales wrapped in banana leaves, a labour-intensive exercise but a culinary favourite.

Over the course of the evening, I heard of the kinds of issues that pester Jews the world over. The handsome medical student that drove me to dinner complained there weren’t enough Jewish girls in town. Others mentioned that the pews at the synagogue were full only on the High Holy Days, and that the Jewish day school was more secular than it needed to be.

Still, by all appearances, Costa Rica’s is a tight Jewish community and, though many of its young Jewish people head to the United States for their studies, Mikowski said most of his friends have chosen to stay in Costa Rica. At the Friday night table, I asked the young parents around me if, given the opportunity, they’d rather live elsewhere. One suggested Israel, but everyone else concurred they were happy staying put. Which makes perfect sense, when you think about it – according to the Happy Planet Index, Costa Rica is the happiest country on earth.