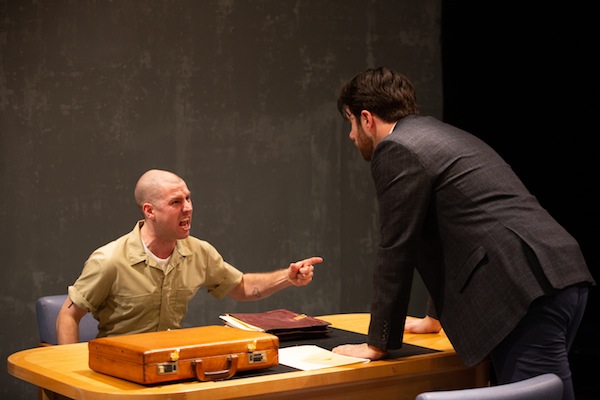 I often wonder, as a lawyer and the child of a Holocaust survivor, if I would be able to defend a skinhead charged with a racist crime. Can a person shut off their emotions and take on a case that is at odds with their moral compass?

This is the premise of Cherry Docs, a two-hander playing at the Pacific Theatre until April 28. Playwright David Gow penned the piece in 1998 as a response, in part, to the homophobic attack by a group of skinheads on his university friend and, in part, to his Jewish Belgian family’s Holocaust experiences.

“I wanted to explore and come to terms with my own anger at seeing young people dressed as Nazis and adopting Nazi thinking 50 years after the end of a war that killed so many millions,” Gow told the Jewish Independent. “Now, 70-odd years later, we seem to have more neo-Nazis than ever before. It looks far, far worse today than in 1998, when someone could (and did) say with a straight face, are you sure this is a problem? It was not good in 1998. Now, of course, it is a problem of epic, international proportions.”

Cherry Docs has been produced globally, including a long run in Germany, where, said Gow, “the critical reception … was extremely detailed, extremely well-written, unlike anything we see in North America, even from, say, the New York Times, in terms of depth and breadth of commentary and analysis. The play ran for something like seven years in rep in Berlin. Two distinct productions have been done in Tel Aviv over the years, and maybe two in Jerusalem.”

As well, he added, “productions in Poland ran for 13 years. One Polish production went to Beijing for an international theatre festival and, there, it played with Chinese subtitles, so, an English Canadian play in Polish and Chinese, in China.”

The success of the play and its international acclaim led Gow to adapt the story for the big screen. Its cinematic debut came in 2006, as Steel Toes. It won several awards on the film festival circuit.

In the two-actor play, which features John Voth as Danny Dunkelman and Kenton Klassen as Mike Downey in the Pacific Theatre production, Danny is a Jewish legal aid lawyer who has been assigned the task of defending Mike Downey, a 20ish, tattooed skinhead, who is charged with murder in the stomping death of a Pakistani fast food worker in a back alley in downtown Toronto. The play’s title represents Mike’s pride and joy, his steel-toed, cherry red Doc Marten combat boots, which he is wearing when he commits his hate-motivated crime. The rationale for Mike’s unprovoked, drunken attack is his perception of the decline and fall of white male supremacy as brought on by what he sees as unchecked immigration, reverse discrimination for employment opportunities and a ZOG (Zionist occupation government) conspiracy of the Jewish elite.

Mike has been indoctrinated into the white racist youth movement and recites antisemitic clichés with ease and conviction. He is a proud foot soldier for the Aryan resistance movement. He goads Danny on by saying, “In an ideal world, I would see you eliminated, but I need you. I know you will do a good job for me, as you are a Jewish liberal thinker, a humanist, who believes in checks and balances in the system.”

Mike insists that he be tried for his crime, which he admits – although he says he did not intend to kill the victim – as an individual. “Try me,” he says, “not the skinhead ideology.”

Danny aggressively challenges high school-dropout Mike to formulate a convincing defence strategy, taking him through “the eye of a needle” in an effort to make him stand up and be accountable for his actions.

The two travel their own paths of discovery through the seven months of legal proceedings. Mike’s journey leads him to a path of redemption, while Danny struggles. Danny must confront not only his violent dislike for his client, but his own racism; in doing so, he explores his Judaism and its tenets of atonement and forgiveness.

The biblical names of the characters Daniel (in the lions’ den) and Michael (the archangel) suggest an allegory, “A battle from above played out here,” said Gow. As the story unfolds, we see the impact that two ideologically opposite humans can have on each other, and that Danny is no saint and Mike no devil.

All of the action takes place in the prison, where Mike is being held in administrative segregation. The style – alternating monologues from the protagonists followed by intense bouts of verbal sparring – and the sparse set (two chairs and a table) are appropriately stark for the subject matter and the intimate theatre space. The costumes also are uncomplicated – Mike’s prison jumpsuit and Danny’s business attire. Subtle lighting and sound cues complete the atmosphere.

Klassen is superb in his portrayal of Mike. At the opening night reception, he shared with the Independent that he had prepared for the role by talking to a reformed neo-Nazi skinhead, which gave him insight into his character. While Voth is solid as the defence attorney, he is not as engaging as Klassen.

Two particular scenes bear mention. In one, the two actors stand at opposite ends of the stage, just breathing and looking at each other with no words spoken – the silence is more powerful than any dialogue. In the second, Mike sits alone on the stage, repeatedly opening and closing a lighter, his face mirrored in the glow of the flame – again, the silence says it all. Kudos to director Richard Wolfe for bringing all the parts of this production together into a riveting whole.

As for another reason why audiences should come to see the play, Gow said, “It is highly entertaining, and that is why it has attracted tens of thousands of audience members. The best-known actor associated with the play has said, ‘It will recalibrate your soul.’ I am not sure about that, but certainly thought-provoking, I believe … not an average play, in any case.”

Cherry Docs is, indeed, a thought-provoking play, whose themes remain timely and relevant. It is difficult to perform and a brave choice for Cave Canem Productions and Pacific Theatre – it is both a visceral and intellectual experience, suitable for older teens and up, as it contains mature subject matter, violence and profanity. For tickets, call 604-731-5518 or visit pacifictheatre.org.