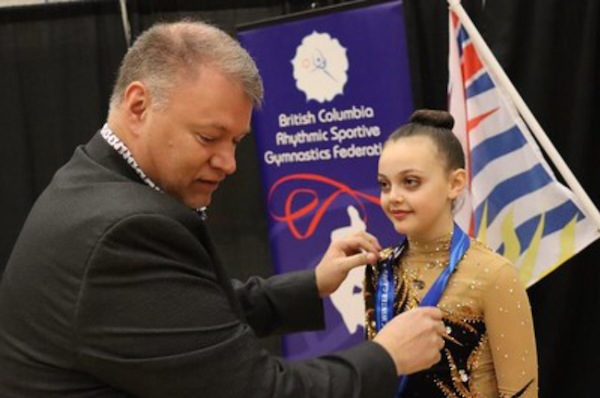 At the B.C. Winter Games in Fort St. John last month, Belle David received a silver medal for her ball routine and placed fourth all around. (photo from Danica David)

The 10-year-old gymnast competes provincially at level 3B (ages 9-11). At the Queen of Hearts invitational competition in Vernon Jan. 24-26, she received an all around first place, a gold medal in the ball routine, a silver medal in the free routine and a bronze in rope. At the Olympia Cup in Burnaby Feb. 7-9, she received a bronze medal in rope, as well as a special award for Miss Dance Jr. And, at the B.C. Winter Games in Fort St. John Feb. 20-23, she received a silver medal for her ball routine and placed fourth all around.

Admitting that she gets a little nervous when she competes, she said, “but I have a lot of practise with competitions and that practise helps my nerves.”

The restrictions that have been implemented by various levels of government to try and manage the spread of COVID-19 have brought changes in that regimen, however.

“Belle’s coach has set an individual stretch and strengthen program for each athlete,” Belle’s mother, Danica David, told the Independent. “The coach has sent a video, 26 minutes long, of basic training exercises she expects the athletes to follow, along with detailed plans for each gymnast. Belle is expected to film herself training and send in the film to the coach to check in daily.

“Mentally, Belle is processing the end of the season coming early. When there are still three competitions left, it’s disappointing, after all her hard work, but she will keep practising at home. She said, ‘I feel like there’s nothing to do and nowhere to go.’”

In Grade 4 at David Oppenheimer Elementary School, Belle said her favourite subject is art. Interviewed before the pandemic forced closures, she said, “I socialize at school and at practice because I don’t have time for friends outside of practice. I mostly do my homework early in the morning before school.”

Belle started dance classes at the Jewish Community Centre of Greater Vancouver when she was 4 years old and began taking rhythmic gymnastics classes when she was 5.

She also makes time for community and cultural activities.

“I celebrate all the Jewish holidays and I keep Jewish traditions,” she said. “Our family hosts holiday parties and I enjoy PJ Library events and books.”

After three years performing in Goh Ballet’s The Nutcracker, Belle said, “I took a break this year to really enjoy Chanukah with my ima, abba, grandma, brother and friends. When I danced in The Nutcracker, sometimes I performed in two shows a day during the run and I missed the Chanukah fun. This year, we did Chanukah bowling, skating, the party bus and menorah parade and, as always, we lit candles and opened presents each night of Chanukah.”

Belle said she wears a red-string kabbalah bracelet on her left wrist, including in competitions, that her mom blesses.

Family is important to Belle and one of her ambitions centres around her grandparents in Israel.

“I have a short-term goal to learn the apparatus hoop,” she said. “I have a long-term goal of making it to the Grand Prix Holon.

“The Grand Prix Holon takes place in my home city (Holon) in Israel,” she explained. “I would like to compete for Canada or Israel. It’s an international competition and it’s across the street from my savta and saba’s apartment. All my family could come and see me compete. This is my dream.”

“I was born in Canada and her dad was born in Israel – we met in India,” David said. “Belle was born in Israel and she has a brother born in Canada, named Omri, he is 6 years old. Their father, Ofir, has never been able to move permanently to Canada because of the nature of his work but he visits often. We live in a multigenerational household in Vancouver with my mother, who was a former competitive athlete. She finds great joy in supporting her grandchildren to pursue athletics – it’s a family passion that skipped a generation. Belle and Omri have seven cousins in Israel and a large extended family that they miss very much.”

In Israel, David said they didn’t have access to activities like they have here. “In our town,” she said, “private country clubs dominated and we had no access without costly memberships. When we came to Canada, Belle was interested in trying everything, sports, arts, activities of all kinds, and, through the JCC and local community centres, it was affordable.

“Belle’s grandmother really encouraged rhythmic gymnastics, as she was involved in the sport herself as a teacher,” continued David. “Belle participated in a rhythmic gymnastics camp at age 5 and she was hooked. When I came to pick her up, her face was red and she looked exhausted. I expected her to want to quit but exactly the opposite – she loved the challenge. The coach had been a Russian-Israeli who spoke Hebrew and Belle felt right at home. She continued camp during the summer. In the fall, she was asked by a club to enter the competitive rhythmic gymnastic training stream.”

As the parent of athletes, David said her “biggest challenge has been being a witness to the highs and lows of the sport without holding any attachments to them. The same goes for their achievements. What Belle achieves is hers alone. It is her self-discipline and motivation to grow in sport that encourages us to support her in any way we can.

“The biggest joy for me,” said David, “is to see that Belle is a wonderful sister, modeling hard work and perseverance to her brother. Belle is self-determined: she chooses her goals and achieves them in her own time. She chose to sacrifice social time and other opportunities to train two years for the winter games. It wasn’t always easy on the family or her but she followed through. I admire her drive – when I was 10 years old, I couldn’t even keep my hamster alive.”

David described herself as “hopelessly non-competitive and uncoordinated” and, therefore, said it is hard for her “to truly invest in the competitive aspect of the sport. Judging and performance can alter from competition to competition and a place on the podium is never guaranteed.

“I find my niche in the esthetic aspect of the sport,” she said, “and support Belle by adding Swarovski crystals to her bodysuits and finding the most complimentary apparatus. These athletes place a lot of pressure on themselves and, after the long hours and hard work, people question why we subject our children to the intensity of the competitive sport. In my opinion, most of the kids at this level of sport are progressing from an inner motivation and they have cultivated a sense of belonging through sport.”