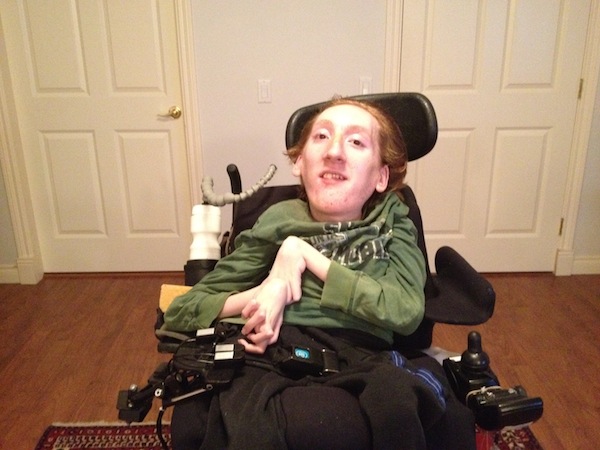 Victoria composer Ari Kinarthy has not let spinal muscular atrophy (type 2), a condition that has confined him to a wheelchair since the age of 6, inhibit his ability to create music. In fact, the very movements he makes in the wheelchair go into producing his music.

Using Soundbeam, an interactive hardware and software system that forms sounds from movements, Kinarthy’s music is recorded into multimedia platforms. For example, movements closer to the recording device establish lower notes and movements away spark the higher notes.

“I create all my music entirely with the computer. Sometimes, I will have access to a guitar player or singer but normally the music will be all done by the samples I use. I usually start with just piano and sometimes will write out a score. I think of a melody and/or harmony and continue from there. I love making themes,” Kinarthy, 30, told the Independent.

“I got into music at age 16 with music therapy sessions. I loved creating music. I started with remixing songs and then creating my own from scratch. I wanted to see what I could create and it just continued from there,” he said.

Starting out at the music therapy department at Canuck Place in Vancouver in 2006, he moved to the Victoria Conservatory of Music in 2007, where, over time and under the tutelage of music therapist Allan Slade, Kinarthy became adept at mastering the intricacies of his device.

The Soundbeam device, which looks like a large red microphone, is stationed in Kinarthy’s studio. It transmits ultrasonic sound, i.e., sound that is inaudible to the human ear, which, in turn, intersects with motion. This then transforms the resulting sound into MIDI, a digitized protocol for electronic instruments.

In 2012, Kinarthy released his first album, A Lion’s Journey, a play on his Hebrew name, Ari, which means lion. It featured an eclectic blend of many genres, including jazz and rock, mixed through the assistive technology. Though he is inspired by several music styles, he admits to loving orchestral music, specifically what one hears in Hollywood films, with Hans Zimmer and John Williams among his favourite composers.

When Soundbeam held an international competition to mark the company’s 25th anniversary in 2013, Kinarthy was one of two winners selected by a jury of musical heavyweights, which included Led Zeppelin bassist and keyboardist John Paul Jones, conductor Charles Hazelwood and composer Edward Williams.

“Pain E Motion,” the composition he presented, was lauded by the jury. Of it, Jones said, “A very interesting idea of performing live with a pre-recorded composition. A very good piece of work in its entirety.”

It was at that moment when Kinarthy decided he would devote himself further to studying music. He enrolled in the Berklee College of Music’s online program and received his certification in orchestration and music composition in film and TV in 2017, but not before releasing his follow-up album, A Lion’s Roar, which also delved into his extensive musical interests.

Judaism, too, has an important role in Kinarthy’s creative process, and his faith has been a source of inspiration. “I recently created a piece of music to honour my local temple. Creating music to share with my congregation made me very happy. I would say that Judaism has helped me share beautiful music,” he said.

After the High Holidays last year, Kinarthy wrote a song called “Kolot Mayim,” with lyrics in Hebrew and English, taken from the Book of Psalms.

His physical challenges have not infringed on his ability to perform live, which he has done on several occasions throughout Victoria.

Presently, Kinarthy is looking for people who might need original music for their project, as well as focusing on promotion and small personal pieces for family and friends.

“I don’t know if it will ever be a reality, but composing for visual media would be a dream come true, be it film, TV or even a commercial. Other than that, I just keep composing music and maybe take some more music classes. There’s always more to learn,” Kinarthy said.

“I never thought I would be able to not only create beautiful songs but also perform them live! That’s all thanks to the technology I have in my home studio.”

To learn more about Kinarthy and hear some of his music, visit facebook.com/arikinarthymusic.