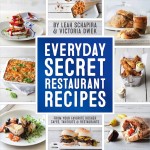 Leah Schapira and Victoria Dwek work together often. Instalments of their Made Easy cookbook series have been featured in the Jewish Independent, with positive reviews. And now, the pair have co-authored Everyday Secret Restaurant Recipes (ArtScroll/Mesorah Publications, 2015).

Here are not just 103 recipes, but they all come from restaurants, many from across the United States, but also from Australia, Austria, Brazil, Canada, China, England, Israel, Panama, Thailand and Uruguay. For each recipe, there is information on the restaurant, a large introduction and photo(s), ingredients, instructions, tidbits or hints for the home cook, and sometimes comments from the chef.

There is also an essay on kosher food trends by Elan Kornblum, founder of Great Kosher Restaurants Magazine, and an interview with him, followed by some basics that prep cooks do. Another essay covers the topic of sweets in the prep kitchen, and yet another, the smoking of foods.

There are 21 starters and sides, like avocado egg rolls from Bocca Steakhouse in Los Angeles; 16 soups and salads, such as a green salad from Milk N Honey in Melbourne; 12 sandwiches, including Philly steak sandwich from Retro Grill in Brooklyn; 17 chicken and meat recipes, such as gong bao chicken from Dini’s in Beijing; 10 fish recipes, like a salmon from Fresko in Aventura, Fla.; 14 brunch and lunch suggestions, including fettuccine with pesto from Deleite in Rio de Janeiro; and 12 baked goods and desserts, such as a halva from Lula by Darna in Panama City.

There are 148 mouth-watering color photographs, both full-page and stamp-size. Whereas a previous version of the cookbook focused on upscale restaurants, this cookbook’s subtitle is “From Your Favorite Kosher Cafés, Takeouts & Restaurants.”

If you know someone who enjoys traveling and eating, or just trying new recipes, this would make a great gift. The cookbook is more than just recipes, it is also a wealth of information.