Two quirky books. Both historically based, both written with humor, both dark and light. But there the similarities end.

The quiet and quirky Fever at Dawn by Péter Gárdos is based on letters his parents sent to each other immediately following the Holocaust, as they recovered from their physical ailments in Sweden. The raucous and quirky Two-Gun & Sun by June Hutton takes its inspiration from Morris “Two-Gun” Cohen and Dr. Sun Yat-sen, who actually did know each other, and Puccini’s La Fanciulla del West, to tell the story of a young woman who heads to a northern B.C. mining town in 1922 to revitalize her uncle’s newspaper, which he left her in his will. 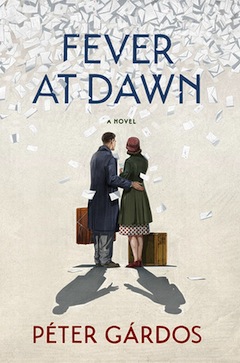 Fever at Dawn (House of Anansi Press, 2016) begins with a note from Gárdos about the letters his parents – Miklós and Lili – sent to each other from September 1945 to February 1946. Until his father died, Gárdos had no idea of their existence, though his mother had told him, “Your father swept me off my feet with his letters.”

The main quirky thing about this story (there are others) is that Miklós tried to sweep no fewer than 117 women off their feet with his letters. Told by his doctor that he would not survive his tuberculosis, Miklós defiantly decides he wants to get married. He inquires for the names and addresses of all the women survivors being treated in Sweden, and sends all of them the exact same letter. He determines pretty quickly that Lili is “the one,” though 18 women respond.

The secondary characters are well-conceived and play important parts in Miklós and Lili’s developing relationship. It is a beautiful and uplifting story – love and hope from hatred and tragedy. It brings up many issues, in Lili’s wanting to renounce her faith and in how the survivors are treated, for example. The translation into English from Hungarian by Elizabeth Szász is a bit awkward in parts, but otherwise does justice to the work. And some of the awkwardness might be due to the fact that Gárdos, who is a filmmaker and theatre director, originally envisioned the story as a film – which was released last year – but also wrote it as a novel. 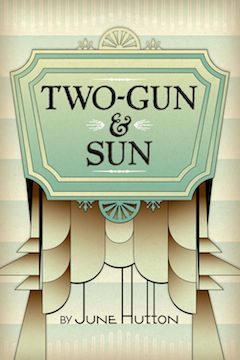 Two-Gun & Sun (Caitlin Press Inc., 2015) might also make a good film. It brings to mind Joss Whedon’s Firefly, mixing science fiction (specifically steampunk) with opera’s larger-than-life and often unbelievable drama with history. It’s a very stylized novel, which, more than other books, means that it will be loved by some readers, and not so much by others.

While loosely historical, it does strongly evoke the era and how hard it must have been to survive back then, especially in a remote town, especially if you were a minority, and very especially if you were a woman. The central character, Lila Sinclair, arrives in Black Mountain from Nelson, given by her uncle’s death a more adventuresome, “manly” economic opportunity than marriage, teaching or prostitution, which seem to have been women’s main choices at the time.

Some of the more fascinating aspects of this novel are the daily-life moments, what people ate, how they earned a living, the excitement a traveling troupe generated, the dangers posed by a lack of law. Anyone in the publishing industry will also appreciate Lila’s struggle to get the printing press up and running, and how newspapers once operated. As well, while her relationship with Vincent, a Chinese printer, runs a predictable course, it offers a chance for Hutton to address the racism of the day.

Two-Gun & Sun is a unique twist on the traditional western and, while the ending wasn’t quite satisfactory for this reader, its originality and oddness were entertaining and energizing.