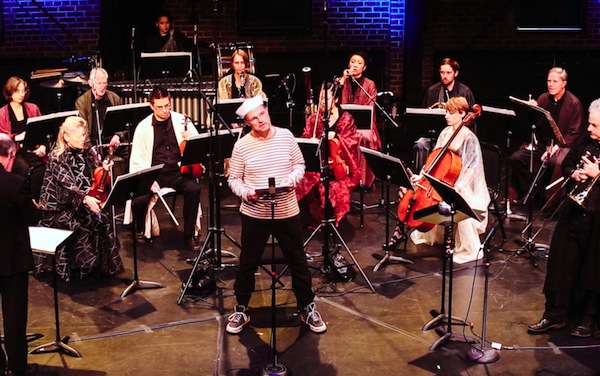 Turning Point Ensemble performs The Old Man and the Sea, directed by Idan Cohen, March 9 and 10. (photo by Tim Matheson)

“There’s something that I really love about these kinds of projects and the agenda that Turning Point holds – creating an operatic experience that is contemporary and designed to communicate music in a truly creative way. I hope this will attract not just the core of new music and opera lovers, but also those of us who are passionate for the arts and want to experience something different. This is what opera is truly about,” said Idan Cohen about Turning Point Ensemble’s Words & Music, which is at the Annex March 9-10.

“This past summer, I was invited by Rita Ueda and Mark Armanini, who run the AU Ensemble, to stage their concert at the Podium Mozaiek in Amsterdam,” Cohen told the Independent about how he met Ueda. “I had a wonderful time working with the ensemble and found the work they do highly inspiring. Rita’s work is very immersive and, in her scores, the musicians play a significant role as characters, fully engaged and active on stage. We found a deep foundation of understanding, and so Rita introduced me to Turning Point. It’s an honour to be working on such a beautiful piece alongside such an exquisite group of artists and musicians.”

The Old Man and the Sea, composed by Ueda with a libretto by Rod Robertson, is based on the short novel by Ernest Hemingway. The story centres around Santiago, an aging fisherman, who battles with a marlin. In the concert, baritone Willy Miles-Grenzberg sings the part of the Old Man (Santiago) and Turning Point co-founder and trombone soloist Jeremy Berkman musically plays the marlin.

“Rita and the librettist Rod Robertson have created a highly poetic rendition of Hemingway’s novel,” explained Cohen. “It’s quite condensed and, at the same time, leaves a lot of room to reflect on its different topics and themes. It creates a rendition of the story that is almost abstract – I love this quality in opera, when the poetic aspects of a story are drawn out through the layered richness of the written word, music and live performance. I connected to it on a very deep level.”

The work is so expressive, said Cohen, “and focuses on the journey of Santiago … and his connection to the sea. There are beautiful moments that ‘paint’ that through the language of music. Unlike my other work, there won’t be any dance in this production, but I do focus on body language and sensitivities that are dance-related. Santiago is a humble man, full of wisdom, close to the end of his days, and Willy Miles Grenzberg, portraying him, embodies the part beautifully.”

Cohen hopes that this staged concert will appeal to a wide audience – “whether you’re a new music lover, a literature, theatre or poetry enthusiast, there’s going to be something there for each and every one of us,” he said.

This type of production can be somewhat complex to direct.

“My role is often to bring different elements together in order to create the operatic experience,” said Cohen. “By nature, music is abstract and, since the musicians are so valuable in this opera and play a significant role, I wanted to come up with creative ways to support this special vision. Drawing that vision from the mind of the composer and librettist to the experience of the viewers can be quite a challenge at times, but the musicians of Turning Point are truly exceptional, best in their field, and they do wonders.”

In addition to the power of the music, The Old Man and the Sea has many powerful – and universal – themes. Cohen described it as “a story about human determination, strength and faith but, most of all, it is about fragility and humbleness. It reflects on our connection to nature, and that is very valuable in our times, when there is so much denial and violence in the way the human race treats its surroundings. Robertson relates to this in a rich way and creates a very relevant testimony. The opera reflects on these important topics through the drama of the music, to expose an extreme human condition. It is powerful in a way that I find not just poetic, but also very emotional.”

Following the performance of The Old Man and the Sea is the première of Bee Studies, which includes texts from Sarojini Saklikar’s Listening to the Bees, a book of science and poetry, and features soprano Dorothea Hayley.

According to the press material for Words & Music, a “special bonus of the evening is a performance of some witty and rarely heard songs from the 1930s, Duet for Duck and Canary and Frogs by the great unheralded Mexican composer Silvestre Revueltas, plus his most-heralded work, Ocho por Radio.”