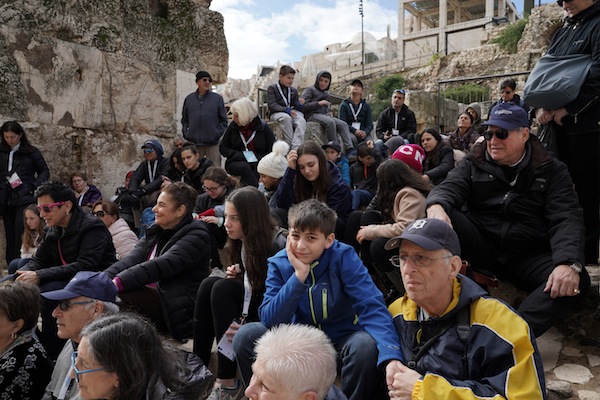 Grandparents and grandchildren discover their roots in Jerusalem with the G2: Global Intergenerational Initiative. (photo by David Salem / Zoog Productions)

The G2: Global Intergenerational Initiative is a new yearlong program being offered by the Jewish Agency. It helps bring grandparents and grandchildren closer with activities and conversations. It is spearheaded by Jay Weinstein, a rabbi from New Jersey who now lives in Israel.

“I work in the partnership unit, trying to build relationships between Jews around the world and Israelis,” Weinstein told the Independent. “I bring my connections from North America and also am exposed to Israeli communities here … trying to build bridges with Israel and overseas.”

The project stems from findings gleaned from meetings that the Jewish Agency held in a few prominent Jewish communities, which pointed to a lack of programming provided to older adults and a lack of an Israel connection among the young.

“We went to our partners on the ground, saying, ‘Let’s come up with something together’ … versus coming up with the idea ourselves and then trying to sell it or take it somewhere,” said Weinstein. “We wanted to do it in collaboration.

“Much of what we do in the Jewish community is for the younger generation,” he continued, “but, here, you have … people who spent their lives building up the federations, schools and synagogues. They’re usually the ones volunteering and donating, [yet] we’re failing to have something to really offer to them.”

Certainly, grandparents can be a positive influence in creating a Jewish identity in their grandchildren.

“When they’ve done studies asking young adults why they are involved in Jewish life or Jewish programming, what came back involved Jewish grandparents,” said Weinstein. “That’s even truer in interfaith marriage, [where] the role of the Jewish grandparent passing down values to their grandchildren is of even greater importance.”

The G2 initiative brings grandparents and grandchildren together over the course of a year through activities and creative projects.

“It gives grandparents the chance to think about what is important to them, about what they want their grandchildren to know about, how their family narrative makes them unique, and special things they care about,” said Weinstein.

Participating grandkids should be in Grades 5 and 6, preteens old enough to have deeper conversations, while still under the guidance of their parents “and they aren’t yet too cool to be with Grandma and Grandpa to do the activities,” said Weinstein.

“It’s not a text-based study. It’s more experiential,” he said. “And, at the monthly meetings, we give the grandparents and grandchildren things to do on their own time without a facilitator, like a little mesima (activity) or venture to do in the community.”

“Based on the partnership platform, we have communities overseas doing it with communities in Israel,” said Weinstein. “And, over the course of the year, they’ll connect with each other digitally. Sometimes, they’ll be synchronized and do a Zoom call, sometimes unsynchronized. One of the bigger goals of the unit is to connect Jews from around the world to Israel and, on the other hand, to teach and educate Israelis about what Jewish life is like outside of Israel.”

Many larger Jewish communities can run G2 on their own, in-house, connecting with their sister city in Israel, but most communities won’t be able to carry it out on the same scale as that of the Jewish Agency.

“We believe there is power in the global Jewish community,” said Weinstein. “To be part of a worldwide network of people is a wonderful experience. I don’t think, oftentimes, that a fifth or sixth grader in Vancouver is connected with another Jewish fifth or sixth grader in Miami and Sydney … and we believe that is a very powerful experience. We’ve been in touch with the Jewish Federation in Vancouver and they are interested in G2.”

The partnership unit needs a local organization to launch the program in a region.

“In most cases, [the partner] is the federation, as they are our national partner, but, that being said, we’ve designed this program to be brought to any organization,” said Weinstein. “So, if there’s a synagogue that wants to participate in G2 or a JCC, we can work with them.

“I’ve gotten a tremendous amount of interest from communities all around North America and the world. People understand that grandparents and grandchildren have this special and unique bond. When we can build meaningful Jewish experiences around the grandparent and grandchild relationship, it’s just very powerful.”

The yearlong program includes an eight-day visit that the grandparents and grandchildren take to Israel – traveling about the country, learning and meeting their Israeli partners. They also get the opportunity to stay in the homes of their Israeli partners for part of the trip, getting a firsthand glimpse at everyday life in Israel.

While there is a cost for the program, G2 works with the different community partners to subsidize some of that, and is also looking for philanthropic partners.

“We’d love to have a partner to help us bring this around the world and not have a barrier of prices and expenses prohibiting families from participating,” said Weinstein. “We truly believe … sometimes we use the language of Birthright … that it’s a birthright of every grandparent to have meaningful Jewish experiences with their grandchild, including traveling with them to Israel.”