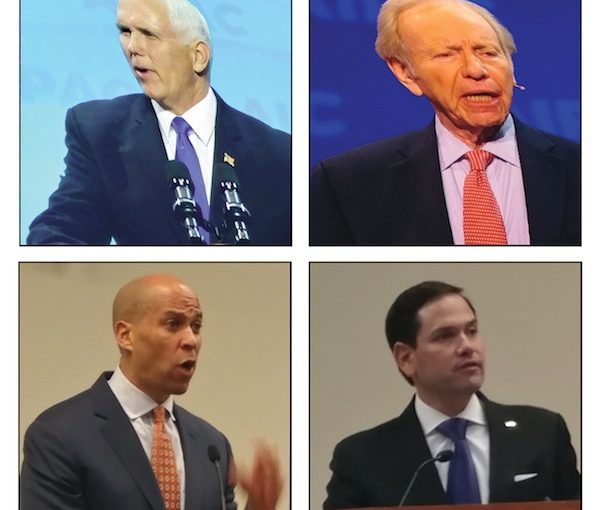 U.S. Vice-President Mike Pence, in addition to other ranking American politicians, spoke of their unwavering support for the Jewish state to 18,000 people at the American Israel Public Affairs Committee (AIPAC) Policy Conference, in Washington, D.C., March 24-26.

Speech themes revolved around recent rocket attacks against Israeli civilians, the Golan Heights being recognized as Israeli sovereign territory by the United States, and sanctions against Iran. Every official who mentioned BDS, the boycott, divestment and sanctions movement against Israel, condemned it.

Much was said about the Democratic congresswoman from Minnesota, Ilhan Abdullahi Omar. Her statements – including “Israel has hypnotized the world” and that AIPAC has influenced U.S. policy through money – have been interpreted as antisemitic by some Jewish leaders.

Pence said, “History has already proven [Donald Trump] to be the greatest friend of the Jewish people and the state of Israel ever to sit in the Oval Office of the White House.”

Among the pro-Israel bona fides of Trump, Pence said the United States shut down the Washington branch of the Palestinian Authority as a consequence for funding terror; ended tax dollar funding for United Nations-funded Palestinian schools; moved the U.S. embassy to Jerusalem; and recognized the Golan Heights as Israeli territory.

“We stand with Israel because her cause is our cause, her values are our values,” he said.

In addition, Pence talked about the end of the “disastrous nuclear deal with Iran” that has been replaced with “a maximum-pressure campaign” of sanctions, thereby causing Iran’s economy to dip.

“There’ll be no more pallets of cash to the mullahs in Iran,” he said.

In a swipe across the political aisle, Pence said, “It’s astonishing to think that the party of Harry Truman, which did so much to help create the state of Israel, has been co-opted by people who promote rank antisemitic rhetoric and work to undermine the broad American consensus of support for Israel.”

Without mentioning her name, he referred to Omar as “a freshman Democrat in Congress” who “trafficked in repeated antisemitic tropes.”

Former U.S. ambassador to the UN Nikki Haley’s first comments were about what she believes is the UN’s hypocrisy.

David Friedman, U.S. ambassador to Israel, claimed that Trump is “Israel’s greatest ally ever to reside in the White House” and, to those who think otherwise, “please, take a deep breath and think about it some more.”

How America is now sanctioning Iran was one example of an Israel-friendly policy. Friedman criticized the previous administration for paying the Islamic Republic $100 billion in the hopes that country would “self-correct.”

“What did Iran do with all its newly found treasure?” he asked. “Did it build up its civilian institutions? Did it improve the quality of life of its citizens?” Instead, he said, it “doubled down on terrorist activity in Yemen, in Iraq and in Lebanon. It increased its stock of ballistic missiles and it invested in military bases in Syria, on Israel’s northern border.”

Israeli Prime Minister Binyamin Netanyahu delivered an address via satellite, initially planning to take the podium in person, but returning to Israel to deal with the rocket attacks.

“The Golan Heights is indispensable for our defence,” he said of the recognition by the United States of the northern land seized by Israel in the Six Day War, in 1967. “It’s part of our history. When you put a shovel in the ground there, what you discover are the ruins of ancient synagogues. Jews lived there for thousands of years and the people of Israel have come back to the Golan.”

Netanyahu said he thought comments like Omar’s are antisemitic.

Housefather said he believes Israelis do not think there’s a negotiating partner for peace, but they share some blame in the conflict: “The more they create settlements, the less likely there will be peace … they should think carefully before expanding settlements.”

A questioner asked him when the Canadian prime minister would do something “real” for Israel and Housefather noted that, in recent weeks, Prime Minister Justin Trudeau forcefully condemned the BDS movement in a town hall meeting.

Another audience member asked why the Trudeau government continues to fund the United Nations Relief and Works Agency. While acknowledging that UNRWA has “curricula problems” that involve “anti-Jewish, anti-Israel comments, misogynistic comments and anti-gay comments,” he said that the $50 million in funding was just.

Housefather said he had spoken with the head of UNRWA and voiced his “concerns at the slow pace they are making changes in the curricula,” but added that their schools make children “a lot less likely to become terrorists against Israel.”

“Yes to helping them with UN aid programs; no to funding their schools,” said O’Toole. And Baird agreed.

On the topic of a peace plan, O’Toole said he “kept hearing from Palestinians their want for a ‘one-state solution,’” while their government “exerts violence, and does not take care of the needs of their people.”

“I think you’ll see from Israeli leaders that they’re prepared to experience real pain [in concessions],” Baird said, but “Palestinians have to stop the incitement” and the “hate-mongering.”

While several candidates for the Democratic party’s 2020 presidential nomination skipped the conference, leading Democratic figures were prominent at AIPAC, including House Speaker Nancy Pelosi, who insisted no one will be permitted to make Israel a partisan wedge issue.