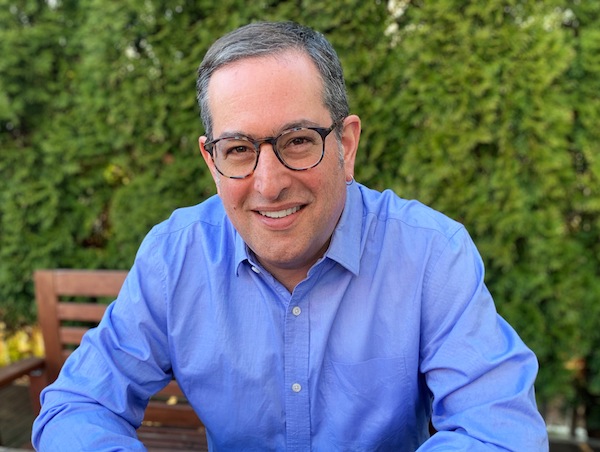 Seth Klein brings his book A Good War: Mobilizing Canada for the Climate Emergency to the Jewish Book Festival on Feb. 22. (photo by Erica Johnson)

At this year’s virtual Cherie Smith JCC Jewish Book Festival, which runs Feb. 20-25, Seth Klein is among the many writers featured. He will talk about his new book, A Good War: Mobilizing Canada for the Climate Emergency, which came out last September.

Klein was the founding director of the B.C. office of the Canadian Centre for Policy Alternatives (CCPA), a position he held from 1996 to 2018, and was also a founder of the B.C. Poverty Reduction Coalition. He is a board member with the nonprofit Dogwood and an advisory board member for the Columbia Institute’s Centre for Civic Governance. He is a founder, advisor and instructor for Next Up, a leadership program for young people committed to social and environmental justice, as well. He spoke with the Independent in advance of his Feb. 22 book festival presentation.

JI: How did you come to write this book?

SK: When you spend 22 years at the CCPA, you’re forever in this place of what you think should happen versus what our governments are prepared to consider, but never more so than in the case of the climate emergency, where we all live in this harrowing space. I wanted to write a book that would tackle that, that would convince particularly our political leaders, specifically those who say they get it, to be more daring than they have been to date in tackling the emergency.

Originally, the book was to have a single chapter on the Second World War, as an example of rapid economic transformation, but the more I delved into that story, the more I saw parallels between the war and the current crisis – not just on the economic front, but well beyond that. I saw parallels in terms of the role of civil society, the mobilization of the populace, the role of Indigenous people and the need to take care of those who make sacrifices; for example, those working in the fossil fuel industry, who need a just transition, modeled after the care for returning soldiers. I also saw cautionary tales around the squashing of civil rights, the things we don’t want to repeat. To speak to a parallel to which the Jewish community has the most connection: the response to refugees.

JI: Can you say a little more about that last point?

SK: Despite Canada rallying to fight the good fight in Europe, we slammed the door on Jewish refugees before, during and after the war. Years ago, I heard Cindy Blackstock, the amazing Indigenous child welfare advocate, give a very simple definition of reconciliation: reconciliation means not having to say “sorry” twice – you learn from what you did. Canada’s behaviour towards the Jewish community during the Second World War was shameful. I believe that the issue of global climate refugees is going to be one of the defining issues of the next 50 to 100 years. We’re going to have to decide who we want to be this time. 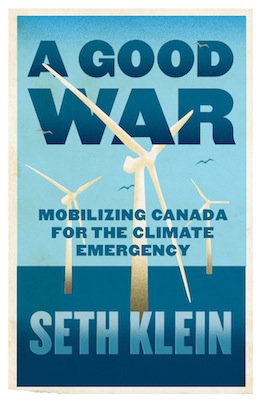 JI: You write that the Mackenzie King government resisted entering the Second World War until the last moment and, even after joining, was slow to ramp up efforts to what was needed. You note that the first nine months of the war are called by historians “the phony war,” and write that we seem to be in the “phony war” stage in our fight against the climate crisis. Can you elaborate on that?

SK: The comparison is really strong. The “phony war” is the period between when they declared war and when things got real. At the beginning of the war, the threat was not clear and present to most Canadians. The fall of France was the moment that the popular zeitgeist shifted. Today, we have the Trudeau government passing a bill acknowledging the climate emergency one day, in the summer of 2019, and then, the next day, re-approving the Trans Mountain pipeline expansion. That is what I call “the new climate denialism.” It manifests in all these governments who say they get it but don’t act like they actually do. In our province, it manifests most clearly in having the most robust climate plan in the country, which we do, and, at the same time, doubling down on fracking and LNG – and you can’t make the math work. That’s the phony war.

JI: What are the assumptions that block government progress on climate action?

SK: The measures that have been adopted so far are largely grounded in what are called “neoliberal” assumptions, which state that society should self-organize according to individual economic interests – the “free hand of the market,” as opposed to the idea that government should function to ensure what is in the best interests of all, so change is left to be voluntary. That’s not working now, and it wouldn’t have worked during the war. When something is an emergency, you don’t make it voluntary.

JI: There is an incredible parallel to COVID-19.

SK: Yes! How do you know when a government knows it’s in emergency mode? These are the four markers: 1) You spend what it takes to win; 2) You create new economic institutions to get the job done, like C.D. Howe, the Liberal cabinet minister [in King’s government] who created 28 new crown corporations to get the job done; 3) You move from voluntary, incentive-based measures to mandatory ones as needed; 4) You tell the truth about the nature and the extent of the crisis and what you have to do.

We did all four of those things in the war. In COVID, we can quibble about the extent that our government has done all four of those things, but I would argue that they have. We’re spending – though it still doesn’t hold a candle to what we did in the war, by the way, but we’re spending. We shifted to mandatory – we locked down the whole economy for some time. We’ve created audacious new programs like CERB that, 10 months ago, none of us would have imagined. Is it too slow sometimes? Yes, but they’ve shifted the mindset. And we have briefings every day, which tell us the truth about the severity of what’s happening. Yet, when it comes to the climate emergency, none of our provincial or federal governments hits any of those markers.

JI: You also describe some cautionary lessons from our wartime experience. Can you elaborate on those?

SK: Aside from the response to refugees, there were all kinds of shameful things, such as War Measures Act stuff, like interning political activists and making political parties illegal, and, most shamefully, the wholesale internment of Japanese-Canadians. There was also the poisoning of Indigenous lands by the very crown corporations whose formation I was so impressed by. These are all examples of state over-reach. The point in recalling these things is to go eyes wide open into the next emergency. To some extent, we have, in fact, already learned as a society – [Brian] Mulroney replaced the War Measures Act with the Emergencies Act, which has safeguards against those types of things. We need the leaders of today to be as bold and innovative as the leaders we had then – and we also need them to be different.

JI: What was the scale of the economic transformation during the war, and how did they pull that off? What are a couple of highest priority steps in your “battle plan”?

SK: The same four steps I’ve already outlined: spend what you have to spend to win, create new economic institutions, move from voluntary to mandatory as required, and rally the public by telling the truth. During the war, they increased government spending tenfold. When C.D. Howe was pressed about the amount of money being spent, he simply said, “If we lose the war, nothing matters.” He carefully controlled all of the supply chains to prioritize the war, including recruiting private businessman, big names like H.R. Macmillan, J.W. Woodward, who abandoned their private interests and served for years as “dollar-a-year men” to serve as controllers and head up these crown corporations because, in an emergency, you don’t leave the allocation of scarce resources to the market – you prioritize what has to be done.

Remember, from 1942 to 1945, the sale of private automobiles in the U.S. of A., the heart of car culture, was illegal. That didn’t happen due to the goodwill of the automakers. They were told. They were busy making stuff for the war effort, making money, but they didn’t decide what to make. We need to approach the climate emergency like C.D. Howe approached the war. We need to conduct an inventory. How many electric buses do we need, how many heat pumps, how many solar arrays, how many wind farms? And, if there is a gap – and there is – we need to decide how we’re going to fill it. Through contracts with the private sector? OK. And, if that’s not enough, we create a new generation of crown corporations to expedite what needs to happen.

JI: Do you think we can rise to the climate emergency in time?

SK: I am trying, in the book, to walk a line. I think, too often, for years, climate communication has been polarized between Pollyannas and pessimists. The leaders we most remember from the Second World War walked a careful line between telling the truth about the severity of the crisis and still imparting hope. Can we do this in time? We don’t know. The reminder I offer to readers is that Canada had a population of 11 million people in the Second World War and over one million Canadians enlisted. You know what they didn’t know? Whether they could win. We know how the story ended, but they didn’t [when they volunteered]. They did what they had to do anyway, and that’s what we have to do.