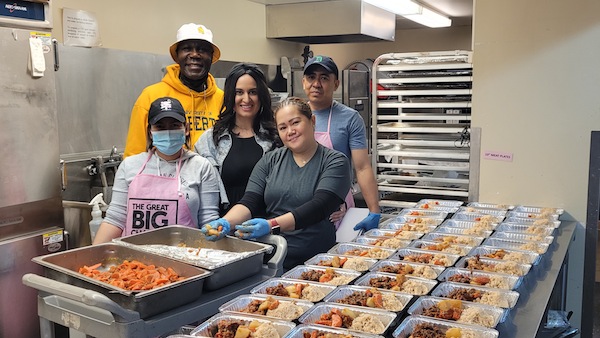 At this year’s Mosaic gala May 29, Congregation Schara Tzedeck will celebrate the team that oversees and orchestrates the synagogue’s In the Box meal program – the people who “have sustained and nurtured our community through the pandemic.”

Just over two years ago, as the pandemic started in March 2020, Schara Tzedeck launched In the Box. The program delivers meals to congregants and other community members in an effort to provide support for those living alone and those in need.

Every week before Shabbat, as well as during the holidays – Rosh Hashanah, Hanukkah, Passover – 32 drivers set out from the synagogue’s Oak Street location and deliver kosher meals to 250 households throughout the Greater Vancouver area.

“In an extraordinary partnership with Jewish Family Services, our donors and members, together with our staff and volunteers, have delivered more than 25,000 meals since the program’s inception in March 2020. Through the holiday and Shabbat In a Box initiative, we have not only nourished our shul family and wider community with hearty Jewish cooking, we have nourished them with constant personal connections,” Schara Tzedeck president Jonathon Leipsic wrote in a message to congregants.

In recognition for their efforts throughout the pandemic, volunteers and drivers will receive a challah board made especially by Schara Tzedeck spiritual leader Rabbi Andrew Rosenblatt.

The 2022 Mosaic gala coincides with Yom Yerushalayim (Jerusalem Day), a national holiday in Israel that commemorates the reunification of Jerusalem and the establishment of Israeli control over the Old City following the Six Day War in June 1967. As such, this year’s gala will have an Israeli vibe, or, more precisely, the feel of “the shuk,” the Jerusalem marketplace. Food will consist of Moroccan salmon, kebabs, burekas and other delicacies that would be sold by vendors in the Holy City. There will also be candy stations, dried fruits, a spice market and fresh breads.

“This is the first gala since the pandemic started, and it is an interesting twist that what started as a program during a time when we were far apart from one another in terms of spacing is now bringing us back to the same physical space,” said Rachael Lewinski, facilities director at Congregation Schara Tzedeck, which had been hosting in-person Mosaic galas for more than a decade before COVID-19 struck.

Juleen Axler will be one of the drivers who will be honoured at the gala. Axler, who has been delivering meals to seniors and those with low incomes since the beginning of COVID, gets to the synagogue around noon on Fridays. She then takes the meals – consisting of a starter, an entrée, a dessert and a challah – to eight or nine homes each week.

The meals, Axler said, vary from week to week and, at holiday times, contain food symbolic of the occasion. For example, during Hanukkah, a box is certain to carry potato latkes.

“It’s an extremely rewarding process to be helping and to be doing my part during COVID. It has not been easy for many seniors to get a meal made and to have human connection for two years. Even now that is easier to move around and gather, seniors are still isolated. And, for my part, it is nice to witness the appreciation people have and to establish a relationship with them,” Axler said.

Despite the pandemic, Schara Tzedeck created a memorable event in 2021 through Zoom with Israeli President Isaac Herzog as their featured speaker. The evening also included footage of Shulem, the Orthodox singer; Rabbi Naftali Schiff, chief executive officer and founder of Jewish Futures; and a pre-recorded conversation between Rosenblatt and Leipsic.

Now back in person for the first time since 2019, this year’s Mosaic starts at 6:30 pm. Tickets can be purchased, and donations can be made, by visiting scharatzedeck.com.