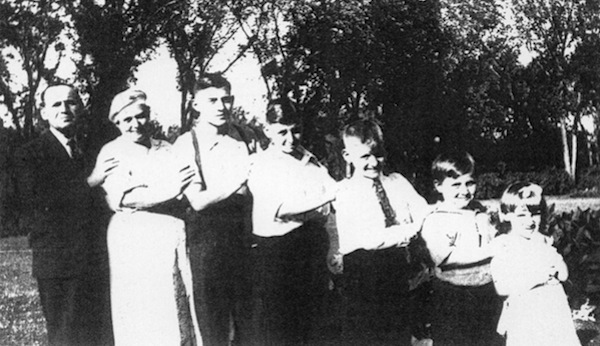 As I get older, I look forward to my childhood memories of the High Holidays with my original family. This year, Rosh Hashanah begins before sundown on Sept. 29 and ends on nightfall Oct. 1, Yom Kippur.

My parents, four older brothers and I had moved to several rental houses after our arrival in Winnipeg’s legendary North End, but the one on Robinson Street is the earliest in my awareness as a preschooler. The neighbourhood was refuge for a host of other immigrant Jewish families who came from the same geographical area and shared the same culture, language and religion. This bond and kinship brought these landsleit together and they congregated around the Talmud Torah Hebrew Free School, where my father taught the children, and the Chevra Mishnayes Synagogue, directly across from our house, giving us the opportunity to attend services in a building that also acted as an unofficial community centre.

Papa attended all Shabbat services at the shul, which was the centre of many family weddings, bar mitzvahs and funerals. Since we observed the Orthodox Jewish religion, women and men did not sit together, so, while the men were seated on the main floor, the women were sequestered in an upstairs oval-shaped balcony overlooking the activity below. Not particularly interested in the liturgy, they tended to talk to one another about their children, their homes and other areas of interest, especially cooking on the High Holidays. This “noise” often interfered with the men as they recited the prayers. At some point, the shamas (the person running the service) would look upward, pound on the podium and shout “Schveig, viber!” (“Quiet, women!”) as if we were all one big family. Things subdued for awhile until the chatter swelled again, requiring intermittent reminders with more pounding, and a commanding, “SHHAA!”

Our old, wood-framed house had a screened veranda where I played and sometimes slept on warm summer nights. Once I was old enough, on Saturday mornings, I was allowed to cross the street to join Papa after a bar mitzvah celebration. There were always treats after the service, and he would prepare a small plate of schmaltz herring and chickpeas for me, and a piece of honey cake for dessert. I loved schmaltz herring and would devour it quickly while Papa looked on with a broad, proud smile.

But clouds of the Great Depression hung heavy over this North End community and there was widespread poverty. Most women did not work outside the home and, like many other men, my father lost his teaching job for a period during the Depression.

When I accompanied Mama to the grocery store or the kosher butcher shop, I didn’t understand why her face flushed and her eyes looked away as she stammered out in Yiddish, “I need food for the children. Can you put this on credit? We will pay you as soon as we can.” Her embarrassment and humiliation collided with my father’s shame, and resulted in many heated arguments between them over money.

The stress was particularly hard on Mama because she wasn’t well and had a large family to care for. She developed a “milk leg” while pregnant with my youngest older brother, Matty. It created a painful swelling of the leg after giving birth, which caused inflammation and clotting in the veins and affects some postpartum women. I vividly recall the too-numerous times when an ambulance came tearing down Robinson Street to our house with wailing warnings. Big men dressed in white would rush in, lift Mama onto a stretcher and take her away amid the shrieking sirens that were now competing with the high-pitched howls of her two frightened preschoolers, Matty and me.

Back then, children were not allowed to visit in hospitals, for fear of transmitting disease, so we could not see our mother for intermittent periods. On one such occasion, my father had enough money to take us to the ice cream store a few blocks away. Holding Papa’s hand on one side, with Matty on the other, I felt safe as we all walked together. And the tears subsided.

Canada declared war on Germany in September 1939 after Hitler invaded Poland, and, although my parents’ family was safe in Canada, their hearts and minds were with the loved ones they had left behind. Yet, our home was filled with joy and laughter.

My mother played happy, lively Russian, Yiddish and Hebrew songs at the black upright piano that held a place of honour among the flowery wallpaper and sagging couches of our living room. The eldest of the five children would lead us in a conga line with me at the other end, and we would dance from room to room, up and down the stairs, and all around the house. Sometimes, he would pick me up, throw me over his shoulder and call out “A zekele zaltz!” like a peddler. “A sack of salt, I have a sack of salt for sale! Who wants to buy my little sack of salt?” Or sometimes I was “potatoes.” Whether salt or potatoes, he would haggle with whichever of my other brothers offered to “buy” me.

Although I was still a preschooler, I knew that Papa was listening to “the news on the radio.” The worry was in his eyes, his face, his body, and his words expressed his extreme concern for our families back in the homeland. But the true catastrophic human saga that was unfolding, even as he listened, would not emerge until the war ended. We would learn much later that most of the relatives left behind, including my maternal grandfather, died in the Holocaust.

Even Papa’s fears could not have fathomed such destruction. The radio had become so much a central focus and source of news that, when the war ended in 1945, I recall asking, “Papa, now that the war is over, will they close the radio?”

“Why do you think they will close the radio?” he asked with a puzzled look.

“Because what else would they have to talk about?”

Libby Simon, MSW, worked in child welfare services prior to joining the Child Guidance Clinic in Winnipeg as a school social worker and parent educator for 20 years. Also a freelance writer, her writing has appeared in Canada, the United States, and internationally, in such outlets as Canadian Living, CBC, Winnipeg Free Press, PsychCentral and Cardus, a Canadian research and educational public policy think tank.