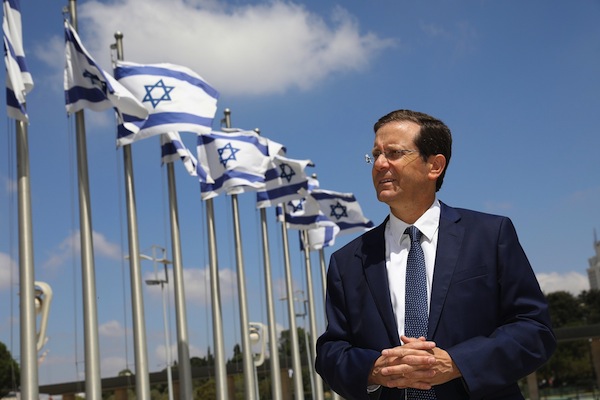 There was a palpable sense of community, both on a local and an international level, at Schara Tzedeck’s Mosaic 2021: Building a Stronger Jewish Future virtual event May 27.

Rabbi Andrew Rosenblatt and synagogue president Jonathon Leipsic led the festivities through a pre-recorded video in which they drove around town, spoke about the current state of affairs and introduced such guests as the singer Shulem, Rabbi Naftali Schiff and Prof. Lara Aknin of Simon Fraser University.

Israeli President-elect Isaac “Bougie” Herzog was the featured guest. He was voted the 11th president of Israel on June 2, less than a week after addressing the Schara Tzedeck audience. He is the son of former Israeli president Chaim Herzog and the grandson of Rabbi Yitzhak HaLevi Herzog, the first chief rabbi of Ireland and Ashkenazi chief rabbi of Israel from 1936 to 1959.

“I have a huge respect for the Jewish community in Vancouver and for your congregation. It is a thriving, successful and beautiful community. Community is at the heart of Jewish life,” said Herzog, who is also chair of the Jewish Agency for Israel (JAFI). During the pandemic, JAFI has come to the aid, through interest-free loans, of more than 75 Jewish communities around the world that were on the verge of collapsing.

Herzog highlighted the role of religious organizations and spiritual leaders as crucial to post-pandemic life. Also central to community life, he said, is the financial ability to sustain institutions, such as community centres, as well as to involve younger people in leadership positions.

The most important role of JIFA is to create a sense of “connecting” within the Jewish world, said Herzog. Since the creation of Israel, it has welcomed more than four million olim, immigrants. Even during COVID-19, 21,000 olim from 45 countries arrived in Israel.

He stressed the importance of having young people visit Israel. It is also imperative, he said, to “bring the truth”; that is, to counter false information about Israel.

Herzog, who has ties to Canada, once visited the University of British Columbia to meet with its leadership. In such meetings, his objective is to make sure “the true picture of Israel is told. You can criticize Israeli policy just like you criticize Canadian policy – that has nothing to do with the inherent right to the Jewish people for their own self-determination.” In general, he noted, “Once people know the facts, they have a stronger affinity with one another.”

He concluded, “I believe there is something metaphysical in being Jewish. That is, we feel an affinity – a Jew from Vancouver and myself could land together anywhere and bond immediately, because we feel like brothers and sisters.”

Herzog has family in Toronto. His uncle, Yaacov Herzog, was the Israeli ambassador to Canada from 1960 to 1963 and, while here, participated in a well-known debate with British historian Arnold J. Toynbee.

Shulem Lemmer, better known as Shulem, was the first guest to appear during the Mosaic evening, and he led the audience from his home in New Jersey through a couple of Jewish standards. Shulem was the first Charedi Jew to sign a contract with a leading music label, Universal Music Group, under its Decca Gold imprint, in 2018.

London-based Schiff, the founder and chief executive officer of Jewish Futures, spoke about the GIFT (Give It Forward Today) initiative, which he started in 2004. It was designed to spark a culture of giving between individuals and communal organizations, and it provides volunteering opportunities for young people.