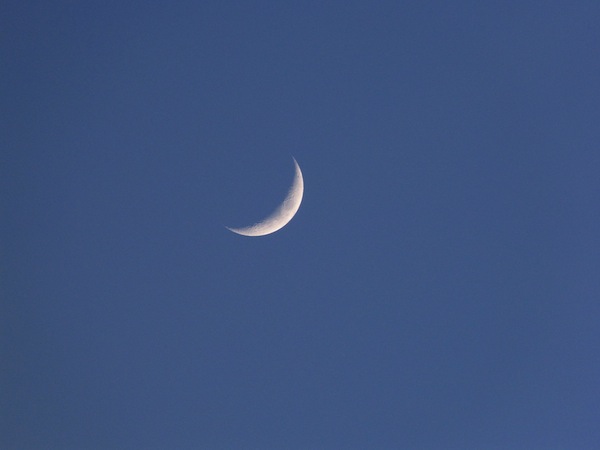 At Rosh Hashanah, the new moon is revealed.

The Zohar, that classic mystical text from the 13th century, describes the High Holidays as a developmental process of female empowerment, which culminates in Yom Kippur.

According to the Zohar, the place we return to when we repent is our supreme mother, the Sephira, and we receive understanding from the Tree of the Ten Sephirot. Returning to our mother means to be gathered to the mother’s womb, a sort of death in order to be reborn, a self-nullification for gaining a new life.

Thanks to these paradoxical relationships between the generations, the mother has the power to heal, to sweeten and to explain every question and shattering in our lives.

According to Shaarei Orah by Rabbi Joseph ben Abraham Gikatilla, “the world to come” is also another name of the sephira (kabbalistic attribute) Understanding. Understanding is constantly giving birth to souls and, thanks to her, we are renewed and recreated every day, especially at the beginning of the year, at Rosh Hashanah.

At Rosh Hashanah, the new moon is revealed. The year begins with coverage and concealment, due to a cloud that covers the sun. In the kabbalah, the sun is the male. The moon, which is usually identified as the Shechinah (divine presence) and is also the lowest sephira, called Malchut (kingship), gets her light from him. When the sun is not shining, the Shechinah is hidden as well, and our world is in darkness. How can the light of Genesis be lit? The Zohar says:

“… Through teshuvah and the sound of the shofar, as it is written: Happy the people who know the blast. Then, O YHVH, they will walk in the light of Your presence (Psalms 89:16).

“Come and see: on this day, the moon is covered and does not shine until the 10th day, when Israel turns back in complete teshuvah and Supernal Mother returns, illumining Her. On this day, Mother embarks on Her journey and joy prevails everywhere.

“Thus it is written, Yom ha-kippurim hu, it is the Day of Atonement (Leviticus 23:27) … the verse should read Yamim Kippurim, Days of Atonements … because two radiances shine as one, Upper Lamp illumining Lower Lamp. This day, She shines from the upper light, not from light of the sun; so it is written, ba-keseh le-yom haggenu, on the covering until our festival day.”

The Zohar emphasizes that the only way to cleave the cloud is with the sound of shofar and teshuvah – both mental and supernatural ways to reach the supreme source and attract new life out of it. The Zohar teaches, symbolically, that this task is assigned on every New Year: to cleave the cloud with repentance, to cancel the decree by the voice of the shofar.

Only then, after the 10 days of repentance, will the light illumine Yom ha-Kippurim. It is a double light: that of the supernal mother (Understanding) which illumines her daughter (Shechinah), and the two will reunite into one. That is why this day is called Yom ha-Kippurim, the day of two feminine lights illumining together, without the aid of any masculine light from the outside.

According to another commentary in the Zohar, unlike at Rosh Hashanah, when the masculine God appears, exposing and lifting His left hand in a gesture of sentence and vengeance, on Yom ha-Kippurim, we realize that this same hand is meant to support Shechinah and lift her from the dust, as is written in the first part of Song of Songs: “Let His left hand be under my head.” (2:6) On this day, Shechinah, the female hero, appears as a bride and we all are her bridesmaids, accompanying her to “Mother river” of the sephira Understanding, to immerse in it and clean her from our sins.

Finally, after being atoned, the dance of sephirot culminates in Sukkot, and the celestial couple is united. The second part of the verse – “and His right hand embrace me” – is implemented, and light and happiness fill the world. At Rosh Hashanah and Yom ha-Kippurim, we pray facing Shechinah and Understanding, and their light envelops and shields us after the cloud is cleaved.

The Book of Zohar sees King David as “The Hero with a Thousand Faces”: the archetypal sinner, the court jester and, eventually, also the partner of teshuvah herself. In Psalms 130, King David says: “Out of the depths I cry to you, Lord / Lord, hear my voice / Let your ears be attentive / to my cry for mercy / If you, Lord, kept a record of sins / Lord, who could stand? / But with you there is forgiveness / so that we can, with reverence, serve you / I wait for the Lord, my whole being waits / and in his word I put my hope / I wait for the Lord / more than watchmen wait for the morning / Yea, more than watchmen wait for the morning / Israel, put your hope in the Lord / for with the Lord is unfailing love / and with him is full redemption / He himself will redeem Israel / from all its sins.”

This psalm begins with calling to God out of the depth, continues with asking God’s forgiveness, ends with yearning and anticipation that grow out of God’s absolution, and reaches the point of redemption and salvation. There are hidden words of praise to God and, as in other psalms, David’s ability to turn his supplications into poetry and to converse with his soul, so bound up with the divine soul, is outstanding.

According to King David, forgiveness is possible only when we are “with God,” and the mercy and redemption are in Him and “with Him” and, therefore, are in us, when we are attached to Him. The space that enables us to undergo the process of “making teshuvah” is created, and we are able to “return to the place” that is our origin and the root of our soul.

King David is not only a great poet, but also the archetypal sinner who, according to our sages, was born to set up “the yoke of repentance.” The sages deal a lot with David’s sins, justify him and even declare radically: “Whoever says that David sinned is merely erring.” (BT Shabbat 56a)

At one point, a scene is described in which David enters the Beit Midrash during a dispute about the world to come, the scholars taunt him about Batsheva and he reproaches them about a flaw in their morality: “… when they are engaged in studying the four deaths inflicted by beit din [court], they interrupt their studies and taunt me [saying], ‘David, what is the death penalty for he who seduces a married woman?’ I reply to them, ‘He who commits adultery with a married woman is executed by strangulation, yet he has a portion in the world to come. But he who publicly puts his neighbour to shame has no portion in the world to come.’” (BT Sanhedrin 107a)

It is evident that our sages were deeply engaged with questions of evil inclination, reward and punishment and, mostly, they identified with King David’s image. This colourful hero – the fighter, the fallen, the worldly, the dancer, the poet – seems to them the most likely to repent and to be fully pardoned either by men or by God. In fact, it might be said that each generation has its own King David. They see him in a different light and cast upon him their own personal traits, their fractures and their hopes to be redeemed.

The Zohar regards David as the hero with a thousand faces. David of the Zohar is poor and deficient, empty and, therefore, filling up and being a penitent (ba’al teshuvah). He knows how a man’s bruised and low soul can be elevated from the depths to a level of joy and thankfulness.

According to the Zohar, the place we return to when we repent is our Supreme Mother, the Sephira, and we receive understanding from the Tree of the Ten Sephirot. Returning to our mother means to be gathered to the mother’s womb, a sort of death in order to be reborn, a self-nullification for gaining a new life.

And what has King David to do with this feminine process? Surprisingly, the Zohar identifies King David as the Shechinah, the same Shechinah that seemingly has nothing of her own, even though the other sephirot depend on her, and she is the most concentrated and colourful of them all. David is like a hero returning from a voyage, radiating myriad lights collected from all his sins and fractures. Had they remained in the form of fractures alone, darkness would have prevailed in the world. Thanks to Understanding – the mother and the wife – they have turned into a spectacular kaleidoscope of lights.

David refuses to hide his sins. After having confessed, acknowledging his deeds and admitting them, the sin loses its form, returns into its raw essence and finally turns into praise to the Lord. God, on his part, forgives our sin and gathers us to Him. Thus, David turns his soul into a lever of teshuvah out of love. Precisely these factors – his feminine side, his majestic quality and his skill to turn a confession into praise – enable David to ascend to mother Understanding and immerse us in the river of forgiveness.

Dr. Ruth Kara-Ivanov Kaniel is a research fellow at the Shalom Hartman Institute and was ordained as a rabba by the Hartman-HaMidrasha at Oranim Beit Midrash for Israeli Rabbis in 2016. These articles are based on her originals in Hebrew and are meant to be read together. For more articles from the SHI, visit hartman.org.il.