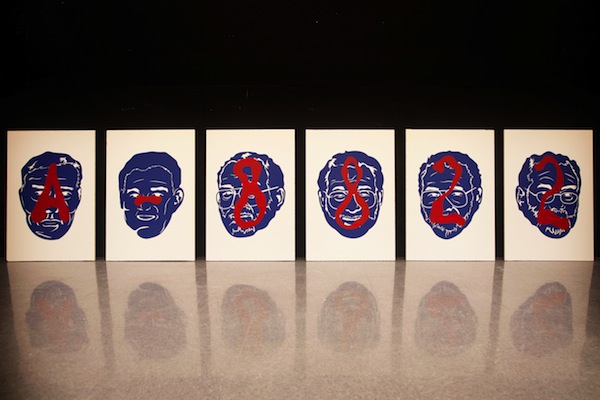 Much of artist Seth Book’s work has been influenced by his maternal grandfather, who was a Holocaust survivor, including “A Series I Don’t Want to Continue” – “One work to symbolize each character tattooed on his arm, and each million Jewish people that were massacred,” explained Book. (photo from Seth Book)

“My art began as solely for the enjoyment of creating work that was esthetically pleasing, but it has since changed to serve a didactic purpose and to provide awareness to social issues and histories that are important to me and my family,” Seth Book told the Independent. “A significant part of my work is to keep the legacy of my grandfather, survivors, and Jewish history alive.”

Book is a member of the third generation. “My mother’s father was a Holocaust survivor, originally from Romania. He went through a few camps, Auschwitz being one of them. Since seventh grade, I have completed a significant amount of research on his story, directly with him while he was alive, as well as after his passing, and, like many other survivors, he had an unbelievable journey,” explained Book, whose work will be on display at Art Vancouver April 16-19, in the unlikely event that the spread of COVID-19 is under control by then and the fair is allowed to take place.

“His presence in my early life has been extremely impactful on the way I live and see the world,” said Book of his grandfather, “and this is what has influenced my art. I truly believe that, in school, work and life in general, I have gotten my tenacity, conscientiousness and resilience from my zaide. As I learned more about his life and what he fought so hard to build for my family, he became a strong source of motivation and drive to succeed in my life. I still uncover bits and pieces about his life after the Holocaust.”

While his art for the past few years has been primarily concerned with his grandfather, the Holocaust, survivors in general, and present-day antisemitism, Book said the past year has been “transformational.”

“My connection to my grandfather allowed me to begin my work at this starting point relative to my own history,” he said, “but it has since expanded to include broader focuses, such as the current generation living on the legacies of survivors, as well as generational trauma and current events affecting the global Jewish community.”

Book, who works at a branding agency doing graphic design and writing copy for clients, is set to finish his bachelor of fine arts degree at the University of British Columbia. His coursework has allowed him to learn about and use many different mediums, he said, “including drawing, digital media, photography, painting and metalwork.”

Born in Vancouver, Book has lived in the Dunbar area his entire life. He attended Vancouver Talmud Torah from preschool to Grade 7, and then went to St. George’s School for his secondary education. He continued his involvement in the Jewish community via Temple Sholom, he said, “where I participated in the confirmation class in 10th grade and then taught at the Sunday school in 11th and 12th grade. I was also lucky enough to travel to Israel with my family on the Temple Sholom trip after my bar mitzvah.”

He was well-versed in diverse media long before his university years.

“Growing up, I was always interested in creativity: building structures, doing crafts, colouring, and especially playing with LEGO,” he said. “I recall being hilariously picky with colours and colouring inside the lines when drawing with other kids as early as preschool; I always find it funny to this day how much it bothered me as a toddler to see other toddlers using odd colour combinations or messy drawing.

“This interest in art was then supplemented by Colette Leisen’s art class all throughout VTT – it was probably my favourite in elementary school. This carried on into various art classes in high school, including drawing, animation, graphic design, ceramics and painting.”

Book said it is hard to define his artistic style because he has always been interested in finding new mediums and approaches. But he has less need for such definition since he began university. Since then, he said, “I have been able to let go of that and continue exploring what interests me rather than being labeled as a ‘painter’ or a ‘photographer.’ I always find that different mediums have such an incredibly unique ability to succeed in accomplishing a piece better than others. In other words, certain mediums are more effective than others in conveying certain ideas or concepts for varying projects. That being said, I try to use the best option I can for each work, trying not to limit myself in expertise. I can always try and learn! I did not work with metal until late 2019, and have already created two works using it, and I am very satisfied with how they turned out.”

Book, who has a background in business management in addition to his art training, said he first heard about Art Vancouver through a summer internship program he took part in a couple years ago, and has kept in close contact with the team there since. “I have loved working with the organizers and enjoyed attending the event every year,” he said. “I quite like the efforts they make to advance the art scene in my hometown and can’t wait to be a part of it as an artist this time.”

Hopefully, he will get that chance, but, even if Art Vancouver is canceled or postponed because of COVID-19, Book is an emerging artist whose works will available at other venues at other times.

He was able to tell the Independent about two pieces he was planning on bringing to the art fair. While he had not firmly decided on all the pieces yet, he said, “I selected the works from my portfolio which I have found to be the most striking, the works that I have received most compliments about, as well as the works which I feel represent my wide practice the best when shown together.”

One of those creations is called “A Series I Don’t Want to Continue,” which comprises six digitally rendered vinyl decals adhered to six two-foot-by-three-foot melamine sheets.

“A series opens an idea and simultaneously closes it,” reads the work’s description. “The values in between the first and last work tell a story or convey some sort of meaning through the relationships formed with the works in between.”

It continues, “A series of works in any media all relate to one another through consecutive nature. Labeling a group of entities as part of a series can bind them together, locking them out from further creation or reproduction. This is where the concept of my work integrates itself reflexively within the format of a series work. Through this work, I explore the contained value of past events, and particularly the Holocaust, in relation to my grandfather’s story.

“When he passed away, the evaluation of his extreme tenacity and hard work to establish our family and provide futures for generations to come was recognized more than ever. ‘Never again,’ the words that often cross our mind, could not be stronger upon recounting the horrors he endured. Never again, but also never forget. These events happened. They must be taught and preserved, but they are contained, and must never grow…. One work to symbolize each character tattooed on his arm, and each million Jewish people that were massacred. There will not be a seventh work in this series.”

The other piece that Book wanted to bring for sure to Art Vancouver is called “Untitled Crowd (The Stars, The Blues, The Ashes).” The 22-inch-by-30-inch ink-on-paper work is also related to the Holocaust. The description reads, in part, that the Nazis’ attention to detail was “dual-edged.”

“On one hand,” it notes, “they kept extremely particular and accurate data records of the prisoners murdered. Ironically, on the other hand, the attention to human detail was nonexistent. When Jewish people were funneled through various camps, they were stripped of their belongings and identities. They were nothing but a number.”

In “Untitled Crowd,” Book writes, “I attempt to discuss this specific lack of attention and elimination of one’s person. Each work is a recreation of real people who either survived or perished during the Holocaust. In order to illustrate the lack of respect and attention given to these unfortunately abused people, I spent a specifically short time on depicting them in the piece. Each face was dedicated about six minutes, to correspond with the six million lives lost. The faces are all overlapping with one another to represent not only the crowds of people who were murdered and their brutal living conditions, but also the morphing of individuals into a mess of numbers and bodies rather than human beings.”

The piece’s three parts carry added symbolism. “The first work is done with shades of mustard yellow to signify the yellow stars Jewish people were forced to use as identification, and the shades are more distinct in overlapping to show not all identity had yet been lost,” writes Book. “The second work is completed with shades of blues to represent the blue-striped pyjamas prisoners wore, and the difference in tone decreases to create a more homogenized look as they lost identity. The final work uses the greyscale to convey the ashes of those perished, and the gaining age of survivors around the world.”

For more on Book, visit his website, sethbook.ca. For more on Art Vancouver, see artvancouver.net.