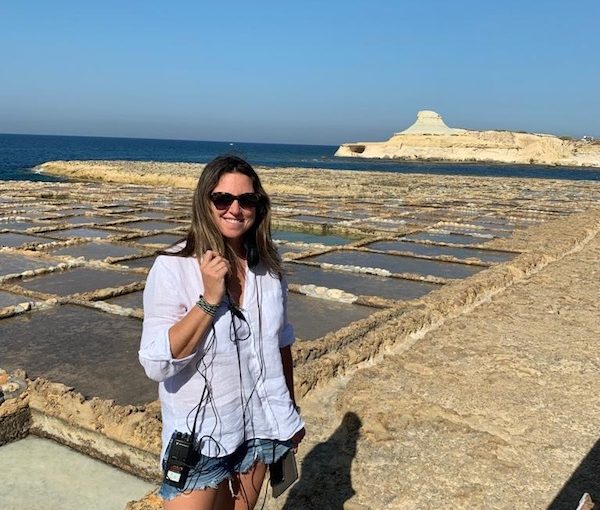 Courtney Hazlett in Malta, one of the many places she has visited to record her Netflix program Restaurants on the Edge. (photo from marblemedia and OutEast Entertainment)

For producer Courtney Hazlett, traveling around the world for her new Netflix series, Restaurants on the Edge, has been an unforgettable, rewarding experience.

The premise of the show is to take struggling restaurants that have incredible locations with breathtaking views but ordinary or subpar food, and turn them around. A team of experts – chef Dennis Prescott, designer Karin Bohn and restaurateur Nick Liberato – come in and transform the establishments into magical eateries. The show is co-produced by marblemedia and OutEast Entertainment, which is a company run by Hazlett and her husband, Steven Marrs.

“We go around the world with a team of experts and, in a positive way, find restaurants that aren’t living up to the beauty of their location and help change that,” said Hazlett, who is also the show’s creator. “We change the décor, menu and business model. We want to add menu items that speak to that destination.”

Hazlett, who lives in Los Angeles, came up with the idea for the program while eating outdoors at a restaurant in Venice, Calif.

“We often go to places where the better the view, the worse the food,” she told the Independent. “That was the seed. I thought, we can go around the world, find restaurants that aren’t living up to the beauty of their location and help change that. My initial impression was, because of the spectacular view, restaurant owners felt they didn’t have to go all out with the food. But that wasn’t the case. It’s not that they aren’t trying, it’s just that a lot of restaurant owners are in over their head.”

In helping decide what changes needed to be made in each restaurant, Hazlett said they first went to social media to see what people were saying about the establishment. They looked at reviews on Tripadvisor and Yelp and read the comments patrons made.

“What I was most passionate about was the storytelling aspect,” she said. “We went out and met people who lived there. In some ways, the story of community shows up on the plate.”

Since it’s being aired on Netflix, it must be a global show, Hazlett explained. “We had to show as many corners of the earth as we could. It’s a lot of globetrotting.”

Hazlett said Tobermory looked like the Caribbean, with gorgeous blue and green water, underground caves, cliffs and ancient forests. Tobermory is almost completely surrounded by water, with Lake Huron on one side and Georgian Bay on the other. The team chose to make over a seasonal restaurant called Coconut Joe’s.

“The owner was a sweet guy who was struggling with the business,” she said. “He loves to travel and wanted to make a restaurant inspired from his travels. That main inspiration was palm trees, and he wanted to have menu items reflecting any place you would find a palm tree. He had about 30 items on the menu – from Thai to Caribbean food, all over the place. The décor was tiki but not in a good way. The restaurant owner’s busy season is only eight weeks of the year because it’s so far north. Since we filmed the episode in the busy season, he had to shut it down one and a half of those weeks in June.”

The designer’s goal was to transform Coconut Joe’s from tacky tiki to chic tiki. The chef’s goal was to celebrate local food as well. At the end of the restoration, the owner was grateful and thrilled with the results.

Season Two, also released on March 14 in Canada, brought the team to seven more destinations, including wine country in British Columbia’s Okanagan Valley. There, they chose to transform the Outboard Waterfront Pub.

“The owners of the restaurant are such an integral part of the story we tell and, in this case, we were thrilled to include a father-daughter team, Campbell and Anne Stewart,” Hazlett said. “Campbell is hoping to retire sooner rather than later and leave the restaurant in Anne’s hands, and Anne, when we filmed, had an infant. So they’ve got a lot on their plate.”

Hazlett said she has always loved food and cooking. Born and raised in Pittsburgh, she earned a degree from Tulane University and a master’s degree in journalism from Columbia University. She went on to work at People magazine and OK! magazine, then was a correspondent for MSNBC, covering pop culture for MSNBC, as well as Today, Morning Joe and more, before running entertainment teams for NBC News Digital.

“Around 2012, I started producing,” said Hazlett, who moved from New York City to Los Angeles. “Then I started to develop content and, in 2014, created the production company OutEast Entertainment. ABC just ordered a medical drama pilot from us called Triage; it’s directed by Jon Chu, who directed the upcoming film In the Heights.”

Although Hazlett is Jewish and raises her children Jewish, she was born Christian.

“What happened is my mom never knew her father and, later in life, found out he was Jewish, and it unlocked something in me,” she explained. “Growing up, I always gravitated towards Judaism. My husband of eight years [Marrs] was a lapsed Catholic and we both converted. For us, as we started to lean into the Jewish traditions, it became such a centring force for our family. Over time, we started to keep Shabbat and celebrate Jewish holidays. We wanted our kids to grow up Jewish – they go to religious school and we are super-active in our temple. Converting became an easy choice for both of us and it made a lot of sense.”

Hazlett admitted it was a lot to ask an owner to close down his or her restaurant while her crew did renovations, especially if the restaurateur had a cash flow problem. “But, on the flip side, being on Netflix is great advertising for them,” she said, adding that they don’t compensate the restaurants, but they do pay for the cost of the makeovers. “In fact, I received notes from the restaurant in Malta that he has had more than 2,000 people reach out to him because of the show. That’s a lot of new customers!”